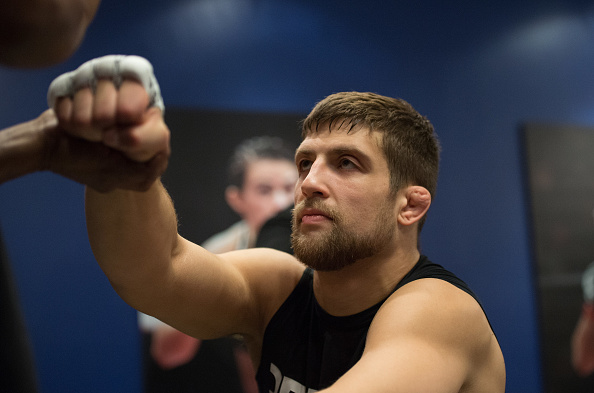 Ultimate Fighter Season 23 contestant Andrew Sanchez is back in Las Vegas. If you’ve missed the current season, Sanchez is a gifted wrestler who defeated favorite Phil Hawes in the fights to get in the house and then won again in his opening round fight against Myron Dennis.

Sanchez isn’t in Las Vegas this weekend to fight – the show still has half the season yet to air - but here to corner UFC middleweight fighter Jake Collier (9-2). Collier is slated to fight unbeaten Albert Uda (9-0) in the FS1 prelims on Sunday night, which starts at 7pm/4pm ETPT.
RELATED CONTENT: WATCH: Sanchez elimination fight against Phil Hawes | Get to know Andrew Sanchez | Recap his win over Myron Dennis

The two began training in Missouri back in the day and Sanchez says he originally taught Collier how to wrestle. Collier was a quick learner and before long he was the one taking down Sanchez.

“We trained in a shed out in the boonies,” Sanchez said. “But he didn’t know how to wrestle and I pretty much taught him and he just ran with it and now the guy is taking me down. He’s really gotten good.”

Though the two don’t train together anymore, Collier has continued to ask Sanchez to corner him – Sunday will mark his fourth UFC fight.

“I motivate him I guess,” Sanchez said.

Collier is looking to bounce back from a loss to Dongi Yang and bring his UFC record to 2-2. As for Sanchez, there are two more first round fights on The Ultimate Fighter before the show airs the next round of the tournament. Tune in on Wednesdays at 10pm/7pm ETPT on FS1 to find out his fate.