Andrew Holbrook: His Wait is Over 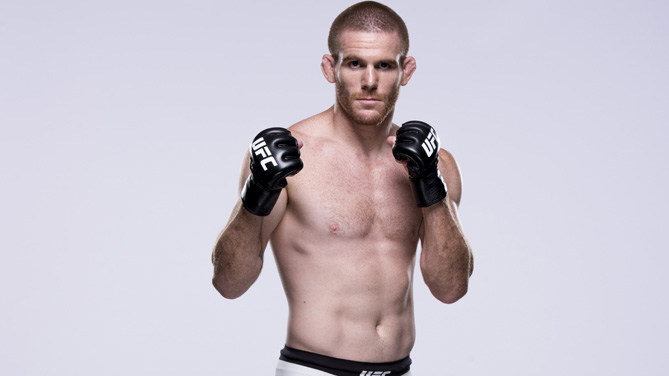 In the life of a young fighter on the rise, there is only one phone call that matters. When it comes, and the doorway to the UFC opens up, everything up to that point becomes validated, yet there is still so much left to prove. Furthermore, the road traveled and the time spent waiting for the phone call to come can present a unique set of challenges. Patience has to be shown and progress measured, all the while operating in a space where a misstep of any variety can tear it all down.

Hovering in that limbo has been known to take the fire out of some, but Andrew Holbrook knew his arrival to the UFC was inevitable. Not in the overly self-assured or entitled sense, because nothing is given in the fight game, but more in the vein of the yield his hard work would produce.

The Indiana representative has spent the past several years smashing through regional circuits in the Midwest and has garnered acclaim and renown as the state’s best prospect in the process. Yet, where most young fighters are outright eager to get to the show and have the stamp of approval that comes with fighting under the UFC banner, Holbrook and his team were more concerned with taking the right path to keep development rolling at a rapid pace.

The 29-year-old Indianapolis-based fighter knew he would get to where he wanted to go, because the two men guiding his career knew that long before the chance to fight inside the Octagon ever materialized. When those two men are UFC vet Chris Lytle and his longtime coach Pat McPherson, things are only going to move in one of two directions. Training in the no frills environment at IBG (Indy Boxing and Grappling), either the hard work will be invested and improvements made toward the ultimate goal, or somewhere along the way the fighter is going to figure out that maybe that’s not what he is.

In Holbrook’s case, Lytle’s tutelage and McPherson’s blue-collar push were the perfect combination to bring out the best in him.

“It’s been great working with Chris and Coach Pat because they kind of took me the same route Lytle traveled,” Holbrook said. “We did boxing, kickboxing and grappling as an amateur, and just to follow in his footsteps has been amazing. It’s turned me into the fighter I am now and I wouldn’t be here without them because the days of being a one-dimensional fighter are over. You have to be versed in all elements of the game and Chris was one of the first guys who could kind of do it all.

“That’s been the focus with developing my skills as a fighter, and I can honestly say I’m comfortable wherever the fight takes place.

The undefeated lightweight has steamrolled through every opponent he’s faced in his professional career, and he will be looking to take his momentum to new heights when he makes his official debut inside the Octagon against Ramsey Nijem at UFC on FOX: Dillashaw vs. Barao 2 on Saturday night.

And where just getting the call to fight on the sport’s biggest stage was something he had been waiting for, the moment to show and prove he can run with the best is the real opportunity at hand.

“I was ready to take any opportunity the UFC threw my way,” Holbrook said. “We knew they were interested for a while now, but they wanted me to get another win or two over opponents with bigger names. That sounds good in theory, but it really became tough to get anyone to fight me. That’s frustrating and started to get to me a little bit, to be honest. I would get a fight, the opponent would change several times because they all pulled out, then it was right back to training again. Waiting and training, but I just kept my focus on making it to the UFC

“When I got that call it was amazing. I mean it sucks that someone got hurt and had to pull out of a fight, but it doesn’t suck for me. When the call came and before he even finished saying the name of the guy I would be fighting I said yes. It wasn’t even a matter of who it was because I wasn’t going to turn down the opportunity I had been waiting for.”

The ideal scenario for a young fighter about to make his first run at the highest level of the sport is to face an opponent of similar experience, but that’s not always how things shake out inside the Octagon. The UFC’s current schedule creates a lot of openings for those who are ready, willing and able to step in and fight, and those conditions sometimes create even bigger opportunities than what would be expected for a promotional debut.

In Holbrook’s case, an injury to Erik Koch opened up a slot opposite of The Ultimate Fighter finalist Ramsey Nijem on the Chicago card. Nijem has been competing in the talent-rich lightweight division for several years and has faced a collection of notable talent during his time in the 155-pound ranks. The 27-year-old Californian will come into the tilt with Holbrook having won two of his past three outings, and he will be looking to sour the surging prospect’s first showing under the UFC banner.

And while Holbrook is excited to be facing an opponent with solid name recognition, at the end of the day it’s only the fight and what this fight means that matters to him.

“Honestly I think it’s kind of cool to be fighting someone I’ve actually sat down and watched a few times,” Holbrook said. “He has a good name and that makes for an even bigger opportunity in my UFC debut. But even as cool as I think it is, this is all still business and I’m going to go in there and fight him.

“The way I see it, everything I’ve done up to this point was to prepare me for what comes next. All of my fights have been at the professional level, but I always thought of it as playing AAA ball. The UFC is the major leagues and now that I’ve been called up to the big show a whole new chapter begins. This is where everybody wants to be, and I have to come out in this first fight and show I belong here.”
>UFC FIGHT NIGHT: DILLASHAW VS. BARAO 2, 8PM/5PM ETPT.