Andrew Craig: Preparing for a Changing of the Guard

"I think I'm a more refined Chris Leben. I'm younger, I'm more athletic,
and I have way more to offer than just swinging for the fences." - Andrew Craig 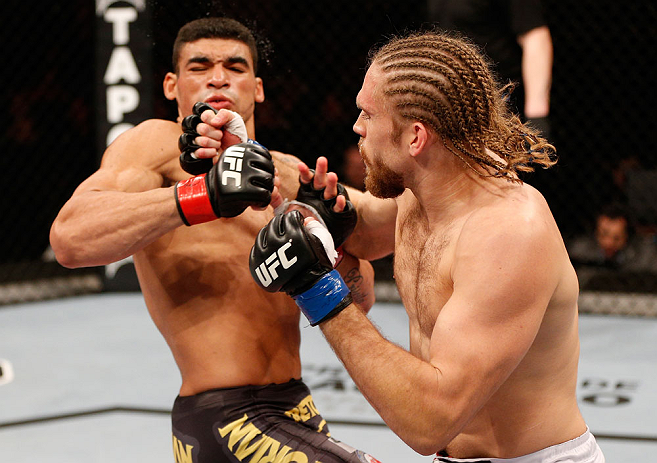 Maybe it’s like playing golf with a handicap. Or spotting the other team a few points in a pick-up basketball game. Possibly, he only likes to show off his A-game when he’s really feeling the pressure. Most likely, Andrew Craig is simply a slow starter, but a strong finisher. And at UFC on FX 7 in Sao Paulo, Craig just waited a little too long to unleash his full potential.

“I had been fighting since '09 and I had done nothing but win,” tells Craig. “Sometimes I would get put in a bad position, but I would come out on top. That's kind of still what happened, but I didn't come out as much on top as I needed to. I lost the first round and won the last round. It was kind of a kick in the ass. I need to let loose sooner and not wait around. Sometimes I kind of wait around for them to gas or I'm concerned about my own cardio or something like that. I think it was evident that if I had done what I did in the third round a little sooner, I could have taken that fight home with me.”

On that night in January, the 27-year-old middleweight out of Houston, Texas experienced his first loss as a professional MMA fighter to Brazilian strongman Ronny Markes by unanimous decision. With an overall record of 8-1, including back-to-back wins inside the Octagon in 2012, Craig has shown a lot of promise as an upcoming talent, but he’s also shown an Achilles heel of sorts by losing the first round in each of his three UFC performances. The “Highlight” dropped the opening round to both Kyle Noke and Rafael Natal before running the tables on Noke to a decision win and knocking out Natal with a head kick in the second. An all too familiar situation developed in the bout with Markes, but Craig ran out of time.

“First round, he took me down pretty quickly and took my back,” discloses Craig. “I had lost that round kind of as soon as it started. In the second round, there were a couple of opportunities. In the third round, he tried to put me up against the cage and I made myself get off the cage and I think I could have done that in the second round. Also, after I got out of that kimura he tried on me in the second round, I kind of followed him around the cage for a while and only threw like two kicks the whole time. I think I followed him around the cage for a minute. I could have let go more there and I think I could have done some damage and possibly stolen that round. The third round, I was in half-guard and I was asking my corner if I should go for a submission. I think in hindsight, I thought I was going to be able to knock him out in that position, but that's just a grinding position. I should have gone for something, even if that meant I ended up on my back. You have to go for the kill.”

The lesson learned from the Markes matchup? Craig easily has the gas tank to go all three rounds and Markes is a South American Hercules. Admittedly, the Texan should have pushed himself harder in the middle of the fight instead of saving it all for the end. It was one of those rare fights that leave a bitter taste in everyone’s mouth when one sees fighter A control the first ten minutes and fighter B do the most damage in the final five minutes, but still come up the loser. Looking toward the future, Craig knows he has to press the pedal to the metal earlier to help fill out his win column and his bank account.

“I was always really scared about getting rid of that “0” on my record and keeping that perfect record intact,” explains Craig. “I didn't know how I was going to react when I lost, but it wasn't nearly as bad. It made me put the sport in a different perspective. It didn't change my perspective on training, but it did change my perspective of what I have to do in the fight. It changed my mind on what I have to do as far as to win the fight. Also, my pay was cut in half. I'm used to getting two checks and I only got one check. I didn't like that.”

Up next, Craig is gearing up for a striker’s showdown on July 6th with fan favorite Chris Leben at UFC 162 in Las Vegas. Absolutely one of the most entertaining scrappers to ever enter the Octagon, Leben will be looking to provide the proverbial fireworks for this Independence Day weekend with his KO-ready heavy hands. The Ultimate Fighter 1 alum has a decorated 22-9 record and will be making his 21st appearance inside the Octagon, searching for a much needed win to break his recent slump. Much like Craig, Leben’s last fight was a decision loss via takedowns and “The Crippler” will be raring to go for a bout with a lot more slugging involved.

“Even though I did lose, I think it's a good sign the UFC gave me Chris Leben,” reveals Craig. “They know I'm not the type to go in there and put on a boring fight and, obviously, Chris Leben isn't the type either. I think even with the third round alone against Markes, they can see that I'm going in there and going for the kill and going for a knockout or some sort of stoppage. I felt very complemented and rewarded by getting the Leben fight. A, it's going to be a fun opponent, and B, he has such a following and people tune into watch him, so putting me in there with him will only up my value as well.”

Even a cursory fan could tell you what Leben is looking to do once inside the cage; the better question is what the lesser known Craig is picturing. “I see a big collision,” states Craig, which is music to all Octagon enthusiasts’ ears, as he wants to meet his foe in the middle and see which fighter blinks first. “I envision our fight as two guys who don't do a whole lot of backing up.”

In preparation for Leben, Craig is taking full advantage of the cache of skilled fighters in Houston, as well as traveling to a few other gyms. The University of Texas longhorn fights out of his Carlos Gracie BJJ black belt cousin Travis’ gym, called Team Tooke. The “Space City” is home to several other gyms like Paradigm, 4oz. Fight Club, and boxing vet Lou Savarese’s gym, where Craig puts in quality work. Outside of his hometown, Craig travels to Austin to battle with Tim Kennedy and as far as Colorado to tangle with the heavies at Grudge Training Center.

“Since 2010, I've been going up to Colorado before my fights and training with the guys at Grudge,” says Craig. “That's always been a huge aspect. Not only the hard training because of the elevation, but there are a lot of high level guys, high level wrestlers, and more than that there are a lot of big guys. I'm one of the bigger guys in Houston, but at Grudge I've got 185ers, 205ers, and heavyweights to spar with.”

Besides a win being on the line, Craig sees a spectacular stoppage over Leben as a possible passing of the torch in the middleweight division. Earning a KO victory over the hard-headed Leben has never come easy, but the few who achieved it, like Brian Stann, Mark Munoz, and the division’s boss, Anderson Silva, have had their UFC careers propelled by it. Inside the Octagon at 185 pounds, it’s a noble goal to stand toe-to-toe with “The Crippler” with both risk and reward hanging in the balance, and Craig believes he’s ready for the challenge.

“I think my standup is more dynamic,” asserts Craig. “He throws a heavy left, a heavy right, he throws some leg kicks, but not a whole lot, and some head kicks, but not a whole lot. He's got more knockouts on his resume, but he's also got a helluva lot more fights. In my fights, I've hurt people in every way. Head kick knockouts and punching knockouts. I think I'm faster, longer, and more dynamic. I think people can expect if they're fans of Chris Leben's fighting style then they're going to be fans of Andrew Craig's. I think I'm a more refined Chris Leben. I'm younger, I'm more athletic, and I have way more to offer than just swinging for the fences. I have crisp striking that can put people down.”

On July 6th in lovely Las Vegas, the new breed takes on the old guard in a middleweight melee between Craig and “The Crippler”. “I've gone 2-1 and it's going to be 3-1 once I'm done with Chris Leben,” declares Craig, who looks to make a fast start and a statement with a highlight reel finish of the seasoned veteran. “I want them all to know that I'm the new guy in town and I'm here to stay. I'm going to be the guy who people are going to think twice about fighting because with my style, I hurt people.”