Andrew Craig: From Fan to Fighter

"I think you have to be wired a tad differently to really enjoy this so much." - Andrew Craig 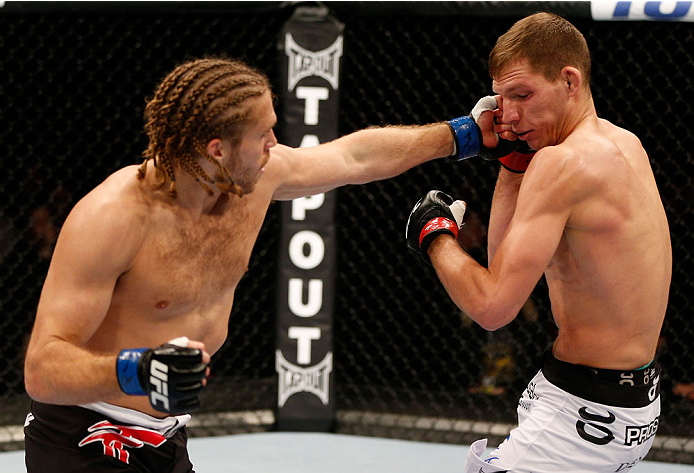 Andrew Craig is not your typical fighter, and yet he doesn't really have a marketable "hook" that makes him stand out. Which is not to say he's not a talented fighter, and his movie star good looks probably don't hurt; apparently I'm not the first person to joke about his resemblance to Chris Hemsworth, the actor who plays Thor. Plus, there’s no doubt that his UFC debut against Kyle Noke impressed a lot of hardcore MMA fans. Stepping in on short notice in Australia, Craig displayed his grit and toughness by coming back strong after clearly losing the first round and earning a unanimous decision victory against the salty veteran. That being said, Craig is still flying under the casual fan's radar in the UFC - for now. And considering his back story - or perhaps more accurately the lack of a back story - Craig's level of achievement in the sport becomes all the more impressive.

He wasn't a troubled kid growing up in a rough neighborhood, fighting for respect and survival. He didn't study martial arts as a young boy. He wasn't an accomplished college wrestler that transitioned into mixed martial arts. He's just an athletic kid from Texas with an unglamorous degree in corporate communications who was a fan of martial arts that decided he wanted to be a professional fighter. And with a late start compared to a lot of other fighters, he succeeded. In fact, he came into his UFC debut against Noke with the Legacy Fighting Middleweight belt and an undefeated 6-0 record. So, why fighting? And how fighting?

"I'm kind of an adrenaline junkie. Fighting is something that fills that void and it keeps me grounded and helps me grow physically and mentally," he says of the appeal of the sport.

Craig's friends and family were supportive when it came to this bold career ambition, but he admits that he didn't let the whole cat out of the bag right away. "I knew my goals and aspirations but I kept them to myself," he recalls.  "I was teaching some classes at the gym I trained at and just said 'I just want to take a couple fights and enjoy it,' but I could also say I was teaching kickboxing and jiu-jitsu too."

But it's the leap of faith and commitment that Andy thinks is the key to his success. "I just read the Steven Pressfield book 'Turning Pro' about how he talked about being a [professional] writer but when he finally made that commitment, he made it happen. It's all about the commitment and whether you're willing to put in the work." Craig sees the parallel to fighting in that both writing and fighting require courageous self-belief, with your success dependent on each performance. The pressure of your future is there every time out, or, as he succinctly puts it, "I better go in there and put on a good fight and win or I'm F-ed."

Pressure and struggles aside, Craig stresses that he loves what he does. "I think you have to be wired a tad differently to really enjoy this so much and make as little as some people do. Luckily, fighting in the UFC you're compensated better than anywhere else, but some people fight their whole lives and don't make it to the UFC and they still enjoy it."

Having achieved his goal of getting into the UFC and beating tough veterans like Noke and Chris Leben, Craig found himself having to refocus and set new goals. He doesn't want to look too far ahead to the belt just yet. His current goal is to crack the top ten and the first step is beating TUF Brazil 1 winner Cezar Ferreira on June 28th. It'll be the first time Andrew has fought in Texas since 2011. After fighting guys in their hometowns in three of his UFC fights, Craig is excited to be the hometown hero for once - to have the crowd behind him and not have to deal with the physical rigors of traveling overseas. He says he doesn't feel any additional pressure fighting in Texas, but admits that coming off a loss to Luke Barnatt he does feel some added pressure to win. "There's a little added pressure. No one wants to lose twice in a row but I think it's how you deal with that pressure. But I'm really excited to be fighting so close to home."

Houston’s Craig seems to know exactly where he went wrong in his last fight with Barnatt. "I didn't know who he was and I looked him up and I saw he had a small record," he admits. "I was lacking a little motivation. I kinda had a big head coming off the win over Leben and I expected a bigger name. So, I think I came in a little mentally underprepared. I started slinging leather trying to put him away and when he didn't go away, I got a little sloppy. I think I learned from that fight to be patient and mentally prepared."

Watching tape on his opponents something Craig likes to use to mentally prepare himself. "My coaches are better at formulating a game plan, but when I watch [Ferreira] guillotining dudes and winning fights it helps me realize he's dangerous and motivates me to get in the gym and train a little harder."  It's something that also serves him well come fight time. "I try to stay as calm as possible," he says, "but that little bit of anxiety and nervousness makes me much better."

Andrew was supposed to fight Chris Camozzi in April but was not cleared to fight due to an illness so, as far as he's concerned, "I've been training for five months so I never got out of shape. I'm ready to go."

Of course, training for Camozzi is not all applicable to Cezar. "They're both southpaws, but they're way different fighters. Camozzi is more of a traditional kickboxer and Cezar has more of the capoeira style and throws really hard kicks and spinning kicks. He has a better double leg than Camozzi. He has a killer guillotine. I don't think he's a more dangerous fighter; they just have different weapons." But perhaps Craig sees more of a clear path to victory in his hands with Ferreira. "I think all three of Cezar's losses are from KO," he says. Actually, his first loss was via decision but that was in 2007 so, point taken.

Don't be surprised if you see Andrew Craig crack the top ten soon. He has a pretty good track record of accomplishing his goals. Also, don't be surprised if one day you see him on the big screen. "I don't know if I'm as big as the guy who plays Thor but maybe in a sequel I could be Thor's younger brother. That'd be cool and I'm not opposed to being in a movie with Natalie Portman. That'd be all right."