Making his pro debut in 1999, Andrei Arlovski has competed against almost every name you can think of in the heavyweight division.

He’s beaten legends from his class and has fearlessly taken on the new breed of young heavyweights, truly standing the test of time.

A former UFC Heavyweight champion with a legendary career spanning two decades, his career is filled with many memorable and exciting moments, but at 43 years old, he has shown no signs of slowing down as he continues his climb back to the title. At UFC Fight Night: Font vs Vera, Arlovski makes the walk to the Octagon for the 38th time to take on Jake Collier. Check out some of “The Pit Bull’s” greatest career moments inside the Octagon before he makes the walk once more.

By his seventh fight in the UFC, Arlovski had amassed an overall record of 8-3. With his last three wins ending by knockout, “The Pit Bull” was becoming undeniable for a chance at UFC gold, and after a bad motorcycle accident would force UFC heavyweight champion Frank Mir to relinquish the title, Arlovski and Tim Sylvia met at UFC 51 to determine the future of the division as they competed for the interim UFC heavyweight championship.

Andrei’s performance against Sylvia was flawless. Despite Sylvia being taller than Arlovski by five inches, “The Pit Bull” broke through his opponent’s reach and landed a powerful right hand. As Sylvia dropped to the canvas dazed by the shot, Arlovski intelligently went for a heel hook submission while his opponent covered up to defend himself from punches. Sylvia fought the submission for a few seconds, but Arlovski continued to squeeze and apply pressure on the ankle, forcing a tap. At 25 years old, Arlovski became the interim UFC heavyweight champion.

“The Pitbull” Makes His Octagon Debut

At UFC 28, Andrei Arlovski made his UFC debut. The Belarus native had a record of 3-1 before signing with the promotion, and after losing his pro debut, Arlovski showed real promise as he went on to win his next three fights. Two wins came by knockout while the other came by submission. What made Arlovski a big prospect was that he showed major potential.

All it took was 55 seconds for “The Pit Bull” to make a statement, as he submitted Aaron Brink in the first round by armbar. Who knew this would be the beginning to a successful career that is still going strong more than two decades later?

“The Pit Bull” vs “Bigfoot”

In 2008, Arlovski and UFC parted ways. For five years, he continued to compete for other fighting promotions, racking up notable wins over Ben Rothwell and Roy Nelson during his time outside the Octagon. In 2014, Arlovski made his return to the UFC’s heavyweight division.

After a 15-minute hard-fought battle with Brendan Schaub, Arlovski won the bout by split decision. For his next assignment, Arlovski was given the daunting task of fighting Antônio Silva. Standing at 6-4, not many were clamoring for a fight against “Bigfoot”. This would be a real test to see if Arlovski really was back and ready to compete with the very best in the UFC.

Arlovski’s plan against Silva worked perfectly. He continued to stick and move while staying outside of Silva’s reach. Silva was able to corner Arlovski for a brief moment, but “The Pit Bull” responded with straight punches that broke his guard. As Silva crashed to the canvas, Arlovski swarmed the Brazilian and landed a few hammerfists until the Brazilian was done. Arlovski delivered the statement he was looking for as he silenced Silva’s hometown crowd with a massive upset.

Falling short in his previous two bouts inside the Octagon, Arlovski needed an impressive win if he wanted to find himself in title contention. For his fourth bout inside the Octagon, Arlovski took on 13-5 Ian Freeman. Freeman was a formidable foe who was on a three-fight win streak and coming off a first-round knockout over future UFC heavyweight champion Frank Mir.

Staying just out of Freeman’s range, Arlovski was able to land solid leg kicks and deliver a right hand that would rock his opponent. As Freeman tried to recover, Arlovski was consistent with blasting leg kicks. Once he had Freeman against the cage, he let his hands go and delivered a barrage of heavy strikes. Freeman was out on his feet and the fight was soon over. 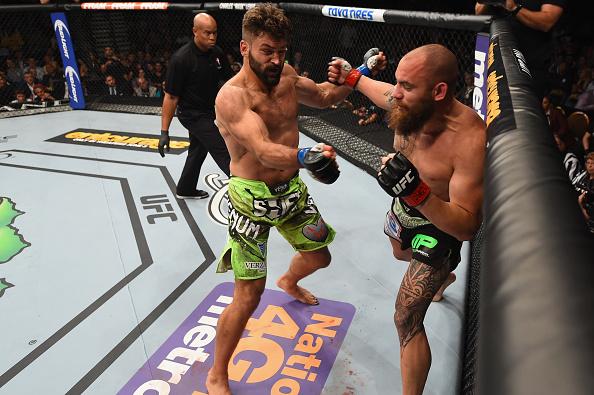 Arlovski and Travis Browne exchange punches in their heavyweight bout during the UFC 187 event at the MGM Grand Garden Arena on May 23, 2015 in Las Vegas, Nevada. (Photo by Josh Hedges/Zuffa LLC)

After losing to future heavyweight champion Fabrício Werdum and beating Brendan Shaub by TKO, Travis Browne was looking to do whatever he could to find his way to earning a UFC title shot. At UFC 187, Browne would get that chance as he was slated to take on a former champion in Arlovski.

Browne tried to use his reach against Arlovski, throwing punches from the outside while landing leg kicks. As soon as Browne was in range, Arlovski landed a short left hook and immediately wobbled his opponent. Once Arlovski hurt Browne, he swarmed the Hawaiian and tried to end the fight there. Browne recovered, but the punches and power from Arlovski were clearly doing damage. When Browne was in range, Arlovski landed a back fist that dazed his opponent. He would hurt Browne with that same punch a few moments later but would even be dropped himself after Browne countered Arlovski’s barrage with a hard right hand.

Arlovski quickly recovered and reapplied the pressure to Browne, who was still hurt and on wobbly legs. After being blasted with more hard shots, referee Mark Smith called a stop to the bout. Keeping his win streak intact, Arlovski’s had proven that he was still one of the best heavyweights out there.