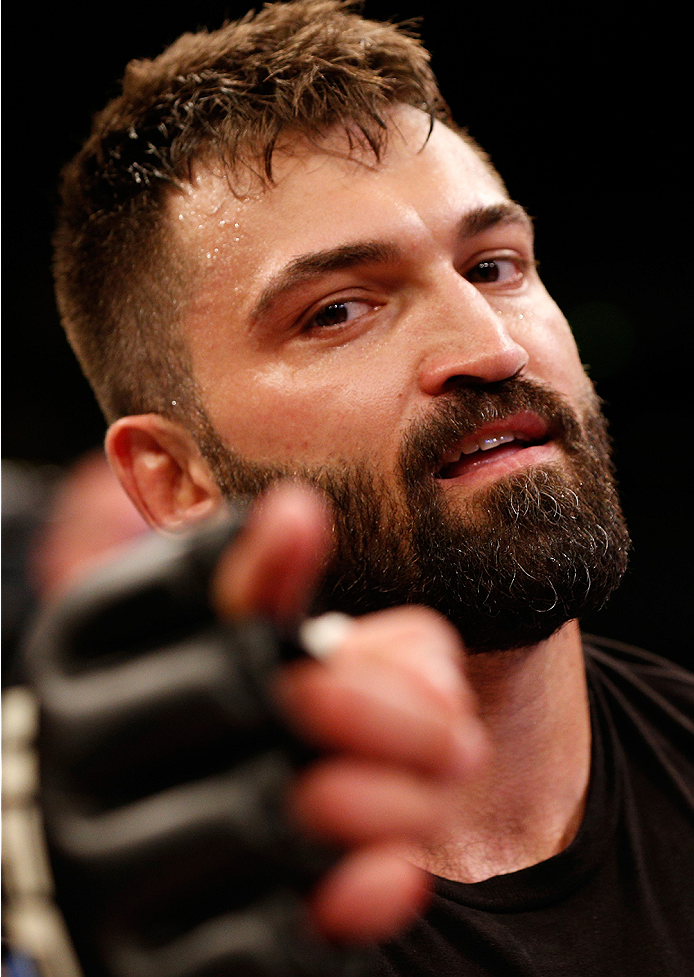 At 36 years old, Andrei Arlovski has to do things differently than he did when he was 25. That means early morning rituals that he doesn’t really care for.

“I don’t remember when the last time I had a workout at 6 o’clock in the morning,” he chuckles. “I have to wake up at 4:45, have some tea or coffee, walk my dog and go to the gym. It sucks, I don’t like to wake up early in the morning.”

But he does it, each day recalling something his longtime coach, Dino Costeas, told him.

“Discipline is remembering what you want.”

“Every day I remember what I want.”

What Arlovski wants is what he had when he was 25 and wrecking the UFC’s heavyweight division. As he made the transition from 24 to 25 in 2004, the Belarus native was in the midst of a six-fight winning streak that would see him finish all his opponents, submit Tim Sylvia in less than a minute to win the UFC heavyweight title, and establish himself as a fighter who could not only do it all in the Octagon, but that might do it from the top for as long as he wanted.

Nothing lasts forever in mixed martial arts though, and after losing his title to Sylvia in 2006, Arlovski seemed to go off into the wilderness as far as his career was concerned. Oh, he kept winning for the most part and he remained in the public eye, even when outside of the UFC, but he only showed flashes of the tenacious “Pit Bull” he once was. And after a four-fight losing streak in 2009-11, he was written off as a serious threat.

But just like nothing lasts forever in MMA, what seems to be conventional wisdom can often be wrong, and beginning in 2011, the Pit Bull started biting back, and to get to that point took a lot of soul searching.

“I became more disciplined and more focused on my MMA career,” he said. “Deep inside, I know I’m not 25 years old anymore, so I need to train even harder to stay focused and be more disciplined, follow the game plan and follow the schedule and the diet. That’s the key.”

He also made the long drive from Chicago to Albuquerque to train with Greg Jackson, and his goals were clear when he arrived in the gym.

“I came with the attitude that I’m going to get better,” Arlovski said. “I’m going to learn something or somebody’s going to whup my ass. I didn’t come here to make friends; I just came here to be better.”

“And then I met Travis Browne.”

The same Travis Browne who Arlovski will be facing at UFC 187 in Las Vegas this Saturday. When they first met in New Mexico, Browne was a star on the rise in the UFC and Arlovski was in the midst of putting together a body of work that would eventually return him to the Octagon. The two spoke, and Arlovski told his new training partner of his intentions.

“I remember we went out one time and I told him ‘you have to understand that one day we might fight each other because I want to come back to UFC,’” Arlovski recalled. “His answer was ‘I don’t have any problem with it.’ I said, If it’s fine for you, then it’s fine for me. Then we went to some sushi place.”

And a friendship began. Arlovski even stayed in Browne’s home while training, and after going 6-1 with 1 NC from 2011 to 2013, the former heavyweight champion was brought back home in 2014, with wins over Brendan Schaub and Antonio “Bigfoot” Silva putting him in the top ten and in a pivotal meeting with someone he knew he might eventually fight.

“I call him a friend and it’s a weird situation, but we’re in a business where we have to fight each other,” he said. “It’s nothing personal.”

Is it a situation Arlovski has experienced before?

“No, because I didn’t have friends in Albuquerque.”

Now he has to fight the first one he made, but one he knows will still be there when the dust settles on Saturday night. He has to know this is one of MMA’s great stories, right?

“Not for me,” he chuckles, not particularly thrilled with the idea of fighting a friend. But when it’s pointed out that the reference was to the whole story, the rise, the fall, the rise again, he does agree that it’s a pretty compelling tale.

“Okay, everybody loves comeback stories. And I want to be champion again.”

But for the moment, all that matters is the fight in front of him.

“Of course I have to have those ambitions to be champion, to be one of the best fighters in the world some day,” he said. “But I’m not going to fight for the title on May 23rd. It’s going to be a very big test for me, it’s very important, and Travis Browne is tough and dangerous and I have to take this fight very seriously.”

“I still have that fire in my eyes.”