Andrea Lee Has Always Been On The Rise

"Sometimes I re-watch my fights just so I can remind myself. When you watch, sometimes you’ll go back and realize, ‘Whoa. I’m pretty good."
By Walker Van Wey, UFC FIGHT PASS • Nov. 20, 2019

To leave a footprint in Invicta or LFA is a feather in the cap for any mixed martial artist. To dominate both is a feat reserved for a very narrow range of fighters.

Candidates in this range can be identified by, but are not limited to, blond hair, a cowboy hat, a southern drawl and a BJJ brown belt.

Andrea Lee is a four fight UFC veteran with a 3-1 record in the Octagon. Taking unanimous decision wins over Ashlee Evans-Smith, Montana De La Rosa and Veronica Macedo in a Fight of the Night performance, Lee has proved herself a rising contender in the UFC’s flyweight division.

Yet it wasn’t her UFC showings that solely put Lee on the map; she has been turning heads her whole career. In fact, since her second fight, she was running the show at flyweight for Invicta FC and the fans have been locked in ever since. 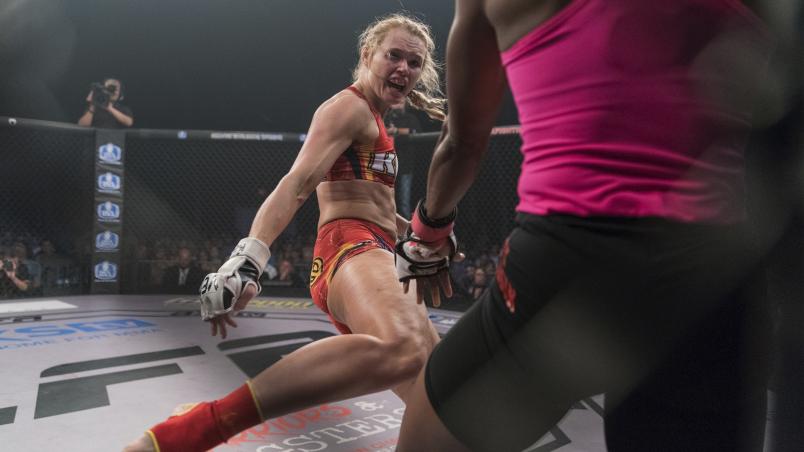 “There’s a lot of fans out there who have seen my fights from Invicta,” Lee said. “I seem to get that one the most. People will come up and be like, ‘Hey! The first time I saw you was your Shannon Sinn fight for Invicta!’ I always get people that are huge Invicta fans as well as fans of LFA.”

In fights two, three and four for Lee, she went 2-1 in the promotion losing only to future UFC star Roxanne Modafferi in a razor-thin split decision. With a strong showing but no 125-pound division yet in the UFC, Lee made the transition to Legacy FC in a strong outing against Ariel Beck. All the parts seemed to be moving seamlessly when Beck put her arm in the wrong place at the wrong time and Lee made a “W” out of it.

It was a strong first showing and Lee went back to Invicta for a couple fights before LFA came calling for a chance at a belt only a stone’s throw from Lee’s Louisiana stomping grounds.

“I had quite a few fights early in my career that I really enjoyed,” Lee said. “My fight with Ariel Beck was a lot of fun but I think the one that stands out the most would probably be Heather Bassett. I was fighting in front of my hometown, so I was just thinking, I’m not going out there and getting embarrassed.” 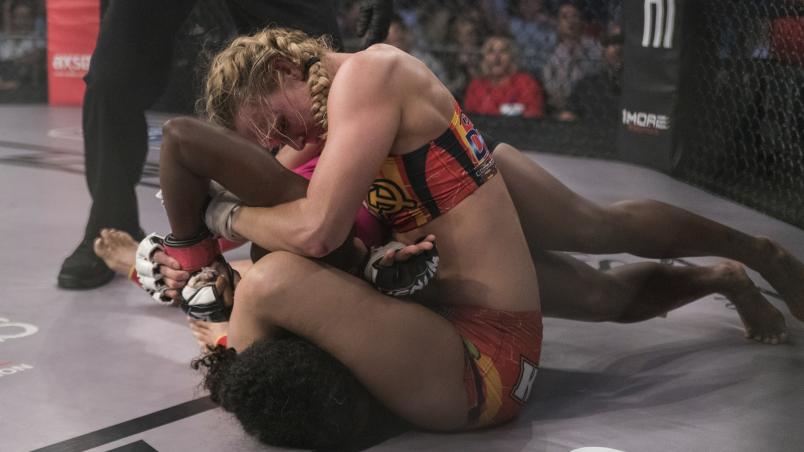 While stakes were as high as they’d ever been for Lee and with many familiar sets of eyes on her, she stepped in the cage feeling free of any negative connotations that may come with elevated expectations.

Round one was an onslaught of strikes from Lee, who decided promptly that a win wasn’t enough but that a KO was the plan. When the strategy hadn’t worked in the first round, Lee went out guns blazing in the second round too.

“I was going all out because I wanted a knockout, but as the rounds go on and the more fatigue sets in, I knew my power was going to go down as the rounds went by,” Lee said. “Sometimes you end up second guessing yourself, but I knew I was loading up on some of my shots and even hit her with some elbows. She was just tough.”

Through the first two rounds it couldn’t have been choreographed any more perfectly for Lee. From the strikes to the defense, to the pressure, to the conditioning, nothing was going wrong.

No real pressure was ever put on her either. After two rounds it was textbook training gone right and a performance she was pleased with every step of the way.

“I just think it was pretty exciting the whole fight,” Lee said. “My movement and everything, I could just tell I was on and I was just crisp. I felt like I was on point. I felt unstoppable.”

When Bassett was still standing after Lee’s flawless efforts, Lee decided a change needed to be made. The fatigue that was at first threatening the KO in front of her family and friends was looking to have now eliminated the possibility altogether. Despite the improbability of the KO, Lee never had to resort to desperate haymakers. Instead, she just used another very sharp weapon. 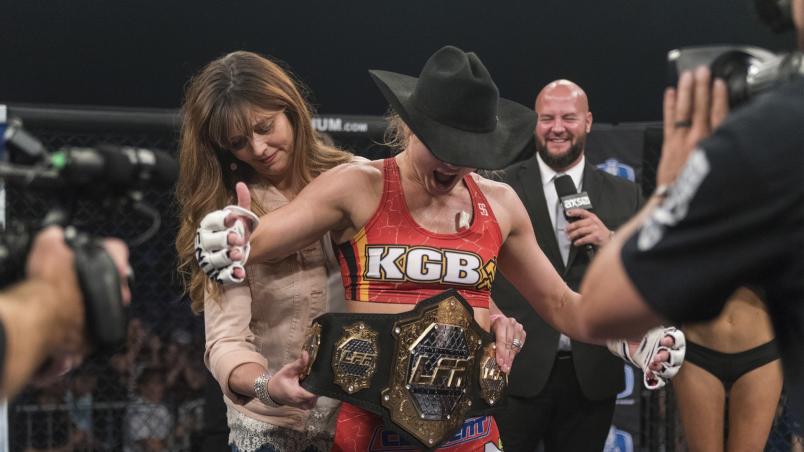 “I made up my mind that as soon as I got the opportunity, I’m going to take this down to the ground and get a sub,” Lee said. “I knew I had already done so much damage that getting a submission probably wouldn’t be that hard.”

Just the way she drew it up, a shot led to a takedown which led to the perfect chain of events that she had envisioned only moments prior. One misplaced arm by Bassett and the finish was only seconds away.

“I remember thinking how I needed to inch my way up into high mount and she happened to be wrapping her arms around my back,” Lee said. “And that as soon as she does that then I’m going to step in and pin the arm and I remember everything working out perfectly. That doesn’t normally happen in a fight. I was thinking a couple of steps ahead and baiting her into that and it actually went how I wanted it.”

Bassett tapped and Lee got to raise her first professional title belt in front of her family and friends, making her a force in the 125-pound division with or without the UFC.

Lee went back to Invicta a few months later and came back to LFA to successfully defend her title a few months after that. With UFC bouts both in front of and behind her, Lee still looks back at her LFA title fight with admiration for her performance and who she is as a fighter when she’s in peak form. It sometimes even serves as an inspiration to herself when things just don’t feel like they’re adding up.

“Sometimes you go so long without watching yourself fight that you forget who you are as a fighter,” Lee said. “Sometimes I re-watch my fights just so I can remind myself. When you watch, sometimes you’ll go back and realize, ‘Whoa. I’m pretty good.’ Sometimes you don’t always feel that way, so when I watch I’ll think to myself that I need to go back to that.”

With an 11-3 record, the ninth-ranked flyweight contender has plenty of confidence boosters at her disposal and more than likely many more inspiring performances to come. With LFA’s library now exclusively on UFC FIGHT PASS, 13 out of the 14 “KGB” fights are only a click away.

Catch Lee’s title fight and all her other career-defining LFA performances ONLY on UFC FIGHT PASS!