Even After A Disappointing Result On The Return Of The Ultimate Fighter, Andre Petroski Knew He'd Get Another Shot At The UFC
By Thomas Gerbasi, On Twitter: @TGerbasi • Aug. 24, 2021

If Andre Petroski was like the rest of us, the moment he found out that he wasn’t fighting on this weekend’s UFC Fight Night card would have been a signal to eat all the cheesesteak in Philadelphia and enjoy the rest of the summer with his wife and daughter.

“I'm always in the gym, regardless,” he said. “If I miss one day, my coach hunts my ass down and sends executors to my house.”

Yep, sounds like Philly all right. So there was no question that when the call did arrive for him to face his Team Ortega squadmate from The Ultimate Fighter 29, Micheal Gillmore, he was going to take it.

"He's standing in the way of my opportunity."

“I wasn't expecting it, but I was ready,” said Petroski, who made it to the semifinals of the reality series before losing to Bryan Battle.

Get To Know Andre Petroski

“Ready” is the default mode for the 30-year-old middleweight, who admits that while a full training camp is always nice, there’s something about getting a late phone call and showing up for a fistfight.

“I love it, personally,” he said. “There's benefits to having a full camp, too, but I love the short notice fights. It's just go out and fight.”

That’s the Philly attitude for sure, and with fighters like Sean Brady, the Daukaus Brothers, Jeremiah Wells and Pat Sabatini all representing for the City of Brotherly Love in the Octagon these days, is it something in that Cheese Whiz? 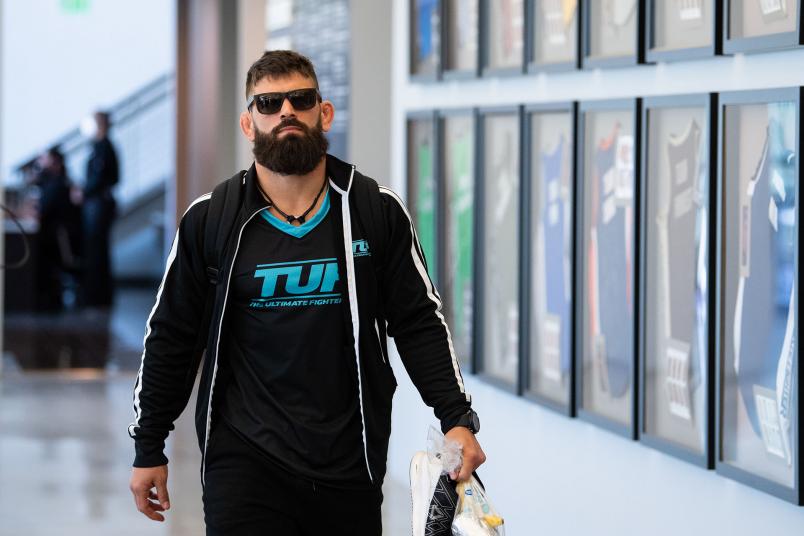 Andre Petrovski arrives to UFC Apex during the filming of the The Return of The Ultimate Fighter on April 29, 2021 in Las Vegas, Nevada. (Photo by Chris Unger/Zuffa LLC)

“I think the east coast in general, whether it's Jersey or Pennsylvania, has great high school wrestling, and I think you're seeing more wrestlers transitioning to MMA,” said Petroski. “Philly was notorious for great boxers, so when you put those together and take a boxing coach and take a good wrestling coach and make one team, I think it's a recipe for success.”

But Philly is something extra, right?

“There's definitely a pattern here of fighters coming out of Philly, for sure,” he said.

On Saturday, Petroski joins his brothers in harm in the UFC, something he wasn’t sure wasn’t going to happen immediately after TUF wrapped up taping.

“A few people told me that I would definitely be back, and then I saw that the card was full,” he said. “There were 14 fights announced on the card so, at that point, I told my manager, ‘That doesn't look good. I haven't heard anything and the card's full.’”

Petroski wasn’t discouraged. He just stayed in the gym and prepared for whatever came next. That whatever was his UFC debut, and while that can be a daunting prospect, he’s looking forward to it.

“I'm more excited than nervous, for sure,” Petroski said. “I don't think I have anything to lose, to be honest. It's awesome. Hard work paid off. I've been competing one-on-one in wrestling or combat sports since I was four years old. It's a long time coming.”