Andre Petroski Earned All Of This

After Earning His First UFC Victory, Andre Petroski Has Bonuses On His Mind At UFC 267
By Thomas Gerbasi, on Twitter @tgerbasi • Oct. 29, 2021

Andre Petroski has a question for his two-year-old daughter, Rylee.

The little one ponders her dad’s question, while the UFC middleweight reveals his intentions for his business trip to Abu Dhabi to face Hu Yaozong on Saturday.

I'm looking for a bonus, nothing less,” he said.

That explains where the funds for Elsa or a pony are coming from, but bonus or not, Petroski is already a hero to his daughter, the clear prize for a job well done not in the fight game, but in life. 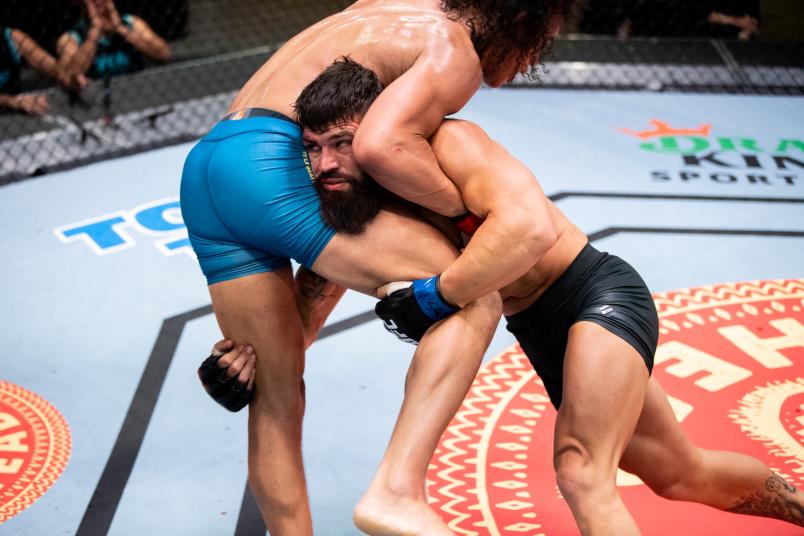 LAS VEGAS, NEVADA - MAY 20: (R-L) Andre Petroski takes down Bryan Battle in their middleweight bout during the filming of The Return of The Ultimate Fighter at UFC APEX on May 20, 2021 in Las Vegas, Nevada. (Photo by Chris Unger/Zuffa LLC)

It wasn’t always going to be that way for the Philadelphian, who hit rock bottom in 2018 as he fought a battle with heroin addiction. Needless to say, the budding mixed martial artist never pictured that three years later he would be in the UFC. Or anywhere.

“Honestly, I never thought I would get off drugs,” Petroski said. “My drug use went from I wanted it to I needed it to tomorrow I'm gonna stop to I can manage this to the reality of I'm never gonna stop and I'm gonna die a drug addict. I was just trying to get to the next day without being sick for the longest time.”

Petroski got to the next day, and the next, and the one after that, and after going through treatment, he emerged as someone determined to not repeat the mistakes of the past. He had too much to live for, and today, there’s another mouth to feed and a fighting career to think about. That’s more than enough motivation, and his rise from the bottom should be motivating for those who are walking those same roads. 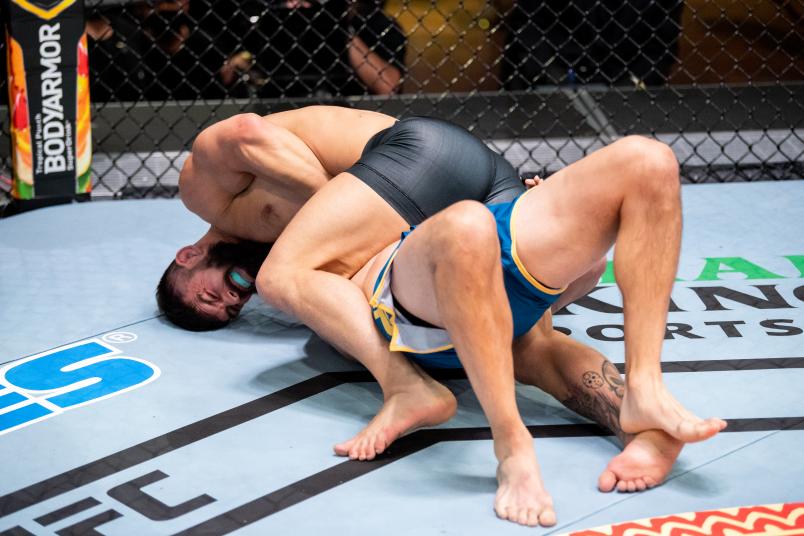 “Look, by no means am I the best role model or anything like that, but my mom's proud of me today,” he said. “I got a daughter and I take care of her. My mother is in that church praying that I'm not gonna die. So if I can help someone, a hundred percent I'll try to help them.”

Hearing that, it’s clear that Petroski has already won. But he’s far from content with just making it to the UFC after a stint on The Ultimate Fighter and winning his debut against Micheal Gillmore in August. He’s chasing more wins, more goals, bonuses and some gold, and it continues in Abu Dhabi against China’s Hu, who makes his first start since 2018 at UFC 267. It wasn’t an expected call for Petroski, who steps in for Alen Amedovski, but that’s not an issue for a fighter who also took his Octagon debut on short notice. So what’s he going to do when he gets a fight with a full camp?

“I don't know, man,” he laughs. “I guess I'm gonna have to do a full camp. But I'm the type that can't really pass up an opportunity, to be honest. And I just think I'm better than all these guys. Whether it's eight weeks or three weeks, I just love fighting and I'm not gonna pass up great opportunities just because I didn't have eight weeks to get ready for it. This is what I do. I've been doing this my whole life.” 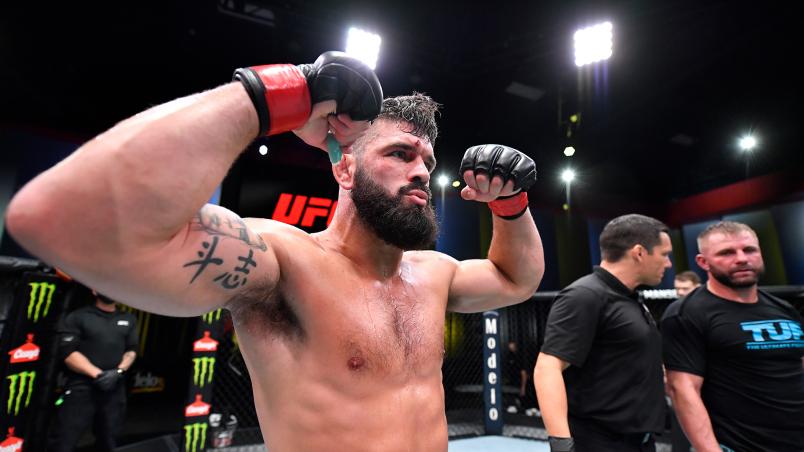 Andre Petroski celebrates after his victory over Michael Gillmore in a middleweight fight during the UFC Fight Night event at UFC APEX on August 28, 2021 in Las Vegas, Nevada. (Photo by Chris Unger/Zuffa LLC)

He’s not going to stop, and it’s that intensity and pressure that has become his trademark. That could be bad news for Yu, who is making his middleweight debut after fighting his first two Octagon bouts at heavyweight and light heavyweight. Making that transition after a long layoff has to be a big question mark in Yu’s mind, and Petroski is happy to make even more questions surface on fight night.

“As we can see, he's had some adversity,” said Petroski. “He got popped by USADA (in 2019), he's dropped a couple weight classes, he's lost some fights, so I'm sure at some point the question is in his head of 'Am I gonna make it here or not?' And that's my job to further remind him.”

So what does a former heavyweight have to dread about fighting at 185 pounds?

“That pace, and when I watched him against Rashad Coulter, you could see that he gasses,” said Petroski. “A pace of a 205-pounder is not the same as the pace of an ‘85-pounder. That's big - the pace and speed is totally different.”

You can almost see Petroski smiling through the phone as he talks about the bout. Or maybe that’s just Rylee making dad grin from ear to ear.

“Not that I know what the older years are like, but I wouldn't trade this age for anything,” said Petroski of his daughter. “The first year for me was brutal, and the second year was awesome, and since she turned two, it's been even better.”

Petroski earned it. All of it.