Andre Muniz Is Ready For The Division’s Best

It took two chances for Brazil’s Andre Muniz to break into UFC, competing in two Dana White Contender Series bouts before earning his contract. Since his arrival, Muniz has won four straight, submitting three consecutive opponents in the process.

“It’s a great opportunity to be here on International Fight Week and on the Independence weekend,” Muniz said. “I know this is considered one of the biggest events of the year. It’s a whole week of shows and other events, so it shows I’m on the right path, it shows the company trusts me and they are giving me an opportunity to showcase my work.”

The two were originally featured as the co-headliner of UFC Fight Night: Luque vs Muhammad in mid-April, but Hall was forced out of the bout. Rather than finding a last-minute replacement, the matchup was postponed until July 2, forcing Muniz to wait nearly three more months to fight.

“This was a good camp,” Muniz said. “The only setback was that the fight was postponed. There was also a bus accident on a trip I went to, but everything turned out fine. I feel very well prepared, focused and ready to brawl on Saturday and give a treat to the fans.

“It’s kind of frustrating for an athlete because we plan ourselves mentally, financially and with our team for a certain date, and we must reorganize everything when the date changes,” he continues. “But God knows of all things, and it wasn’t supposed to happen then. I cooled down a little bit, because I had already lost some weight, so I gained some of it back. But I’m an athlete all year long and I’m prepared all year long. When they gave me a new date, I was ready, I took it and I’m just happy to be here today.” 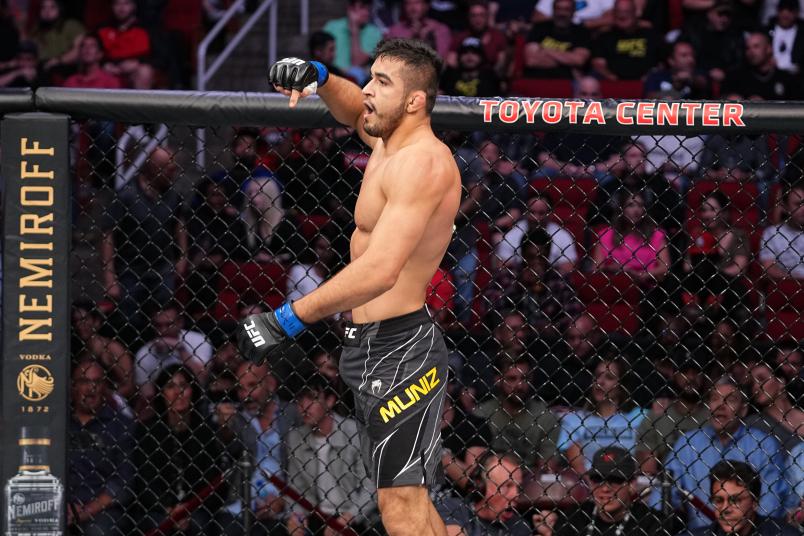 Andre Muniz reacts after defeating Ronaldo Souza of Brazil in their middleweight bout during the UFC 262 event at Toyota Center on May 15, 2021 in Houston, Texas. (Photo by Josh Hedges/Zuffa LLC)

Unlike fellow middleweight Alex Pereira, who’s fighting the No. 4 ranked contender three fights into his UFC career, Muniz is taking his path to UFC gold slowly. Putting it in the matchmakers’ hands, Muniz has enjoyed the process of gradually fighting tougher competition as his career progresses.

But after three quick submissions, all by armbar, Muniz is ready to fight the best fighters in the world, and Hall is the first step in reaching the division’s elite.

“I don’t pick opponents,” Muniz said. “When the UFC offered me Hall, I took it right away. It’s an opportunity to get into the Top 10, so I’m very happy about it. I trained a lot and I’m very focused. I know it’s going to be a tough fight, because we’re talking about one of the 10 best athletes in the world, but I know the path to where I want to be won’t be easy. I must climb a stair and I hope that on Saturday I’ll take another step towards the top.”

Stylistically, Muniz and Hall are polar opposites. Hall throws hard low kicks and punches from unconventional angles to surprise and out strike his opponents. He also has the power to end the fight early, as evidenced by his 13 knockout victories.

Muniz, finishing 15 of his professional bouts by submission, always looks to hit the mat, finding success in nearly every grappling exchange. 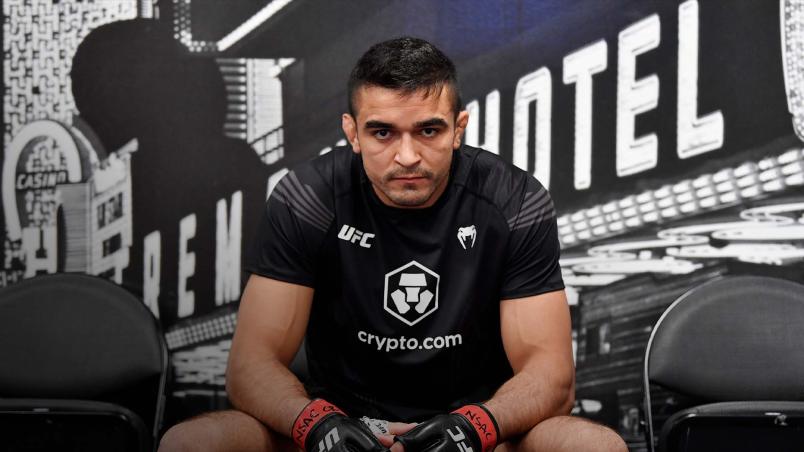 “It takes some time to get the fight to the ground, but I won’t deny it, and everybody knows that jiu-jitsu is my main weapon and striking is his,” Muniz said. “For sure, his goal is to keep the fight standing, while mine is to take him down and submit him.”

As easy as “Sergipano” makes it sound, Hall has never been submitted, so finishing the fight by that method at UFC 276 will add personal satisfaction on top of getting the win.

At the same time, it’s difficult for anyone to count out Muniz getting that desired finish, since his last three opponents have all succumbed to his skills on the ground. Defeating Eryk Anders, Ronaldo “Jacaré” Souza and Bartosz Fabiński all by armbar in a 15-month span, it’s become Muniz’s trademark finish in UFC.

“I believe repetition is the key to success,” Muniz said. “If you train it to exhaustion, when the fight comes, your body repeats it automatically. So I believe that I’ve been doing that in training, so it has been happening in my fights.”

“But that’s just one of my moves. If you take a look at my record, I have submitted guys in many different ways, so I’d say these three in a row were in the heat of the moment: I saw the opportunity and managed to lock the armbar.”

Not only is Muniz looking to break into the middleweight division’s Top 10 and eventually fight for a title, but there’s also another achievement on his mind. Currently chasing Gerald Meerschaert for most submission wins in UFC middleweight history, Muniz is nearly halfway there despite only having a quarter of the Octagon experience.

“One thing I say is that my goal is to have the most submissions among middleweights,” Muniz said.