Andre Fili Is Putting It All Together

“I think I’m going to win,” Fili said. “Fights (are) chaos. You can predict it, and sometimes you’ll be right, but I think, for me, I’m a guy who really feels things, and whatever opportunity presents itself, I’ll capitalize on it.”
By Zac Pacleb, on Twitter: @ZacPacleb • Jan. 16, 2020

Fighting comes easy to Andre Fili. That fact got him in trouble often as a kid, but for more than a decade, it’s how he’s made his living. More than half of Fili’s fighting career has been spent competing in the UFC, but there’s a feeling around him that the 29-year-old is starting to make good on his vast potential.

His most recent fight felt like a microcosm of that fact. Fili knocked out Sheymon Moraes in the first round, his first finish since 2015 and his fourth win in his last five fights. Not only did that happen in front of a friendly crowd in Sacramento, where he has lived and trained at Team Alpha Male for years, but it came in front of his dad, whom he hadn’t seen in 17 years.

“It was just the best moment of my life so far,” Fili told UFC.com. “It was just a really emotional, really beautiful moment for me. Being around friends and family, some of them I haven’t seen in over a decade, they got to make it out to the fight, and getting that win in Sacramento with my team there, with my teammates and coaches there, and also some of them getting wins on the same card, it was perfect.”

As sweet of a memory as that is for Fili, he intends to top it on Saturday.

“It’s going to be hard to top, but that’s the beautiful thing,” Fili said. “You can’t – that’s something that my coach Urijah (Faber) preaches a lot – you can’t get too high with the highs or too low with the lows, so it’s the best moment of my life, but right on to the next fight.”

Following his last win, some wondered whether Fili would get a crack at a top 15 opponent. Instead, he faces streaking up-and-comer Sodiq Yusuff. Yusuff, a Contender Series graduate, is undefeated in three UFC fights with a pair of first-round finishes.

It’s an exciting matchup for those who know what these two bring to each contest, and while it might seem like a classic rising star versus veteran bout, Fili is only three years older than his 26-year-old opponent.

“He’s athletic, he hits hard, but everybody hits hard,” Fili said. “Everybody is athletic. If you’re going to be a professional fighter, those are prerequisites.” 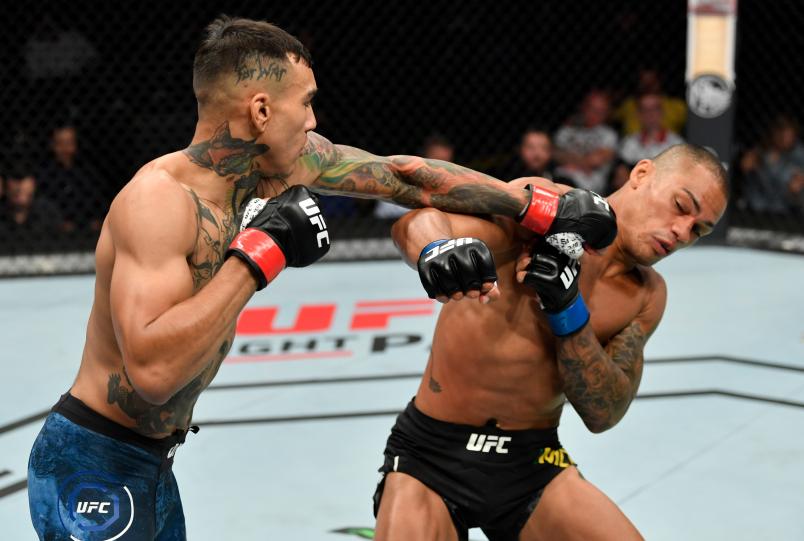 Where Fili says he has the edge is in the mental side of the game. Not just in mindset, but also in processing information while inside the Octagon.

“There’s these intangible things,” he said. “There’s a vision. There’s an awareness. There’s a sixth sense of timing that I bring to the table that I don’t think anybody can match right now.”

Part of how Fili got there, and something he quickly brings up as a difference maker, is his dedication to working on his mind the same way he works on his game. While he said he always felt like he trained hard physically, he used to shrug off the idea of seeing a sports psychologist.

“I thought if you needed to talk to someone about fighting or have a sports psychologist to get ready for a fight, then you weren’t a real fighter,” Fili said.

That proved untrue for Fili, who described his spirit as “kind of sick” and that he felt “sort of a void.” To combat that, he put in the work to grow his way of thinking and approaching things, and it has paid dividends to the point that Fili now believes neglecting that aspect of fighting is akin to ignoring wrestling, jiu-jitsu or standup as a mixed martial artist.

Against Yusuff, he gets to showcase his growth against someone many are touting as the next great featherweight contender. Fili, however, has plenty to say, and he just might have the correct tools in his bag to get a number next to his name should he continue this run of success.

“I think I’m going to win,” Fili said. “Fights (are) chaos. You can predict it, and sometimes you’ll be right, but I think, for me, I’m a guy who really feels things, and whatever opportunity presents itself, I’ll capitalize on it.”