"I plan on being a lot more precise, a lot more fluid, and an all-around more technical fighter in this next fight." - Andre Fili 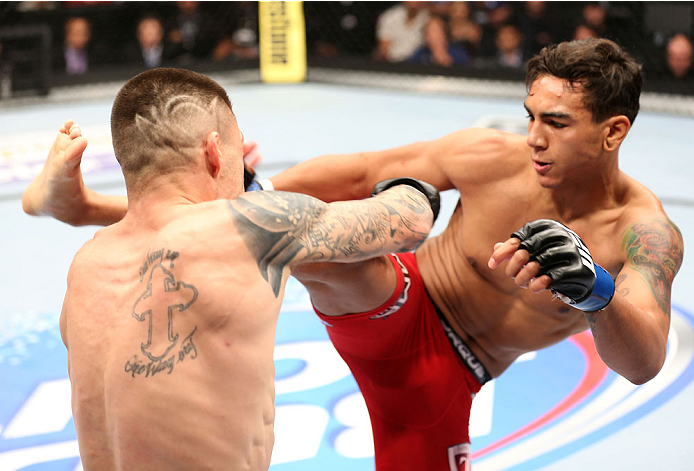 With a nickname that inspires giggles and after walking to the Octagon at UFC 166 with a “piano key belt in JoeJitsu” around his waist, one can rightfully assume that Andre “Touchy” Fili knows how to enjoy himself and have fun in the moment. But make no mistake, once the Octagon door closes – the featherweight prospect is a stone-cold serious stoppage machine, something which was on full display against Jeremy Larsen inside the Octagon in Houston last October.

Owning a 13-1 pro record that includes ten finishes, Fili is an all-consuming destructive force in the cage who has been unbeaten in nine fights since joining the ranks of Urijah Faber’s Team Alpha Male in Sacramento, California. After jumping into the hybrid combat sport at 19 years old, Fili scored four straight stoppages due to strikes before entering a battle for a belt in a local promotion. In that title clash, Fili experienced his first and only loss – by way of a knee injury in the fifth round – prompting him to make a life change which would guide his restless spirit on a path toward his dream of competing in the UFC.

“When I got to Team Alpha Male, I had an ankle monitor on and I was under house arrest,” reveals Fili. “My probation officer counted fighting as part of my job, so I got to leave and train, but I had to go straight home after so the ankle monitor wouldn’t go off. I was just kind of a punk kid. I was getting in trouble, partying a lot, and I was surrounding myself with negative stuff. When I got to Team Alpha Male, I started seeing a better way of doing things. Urijah is such a positive guy and he looks out for everybody and that rubs off on everyone. We have a family mentality at Team Alpha Male and they saw the best in me. I didn’t have a lot going for me then and they took me under their wing and, now, I’m a part of the team. I’m really thankful I have those guys and they pointed me in a positive direction. I’ll always be indebted to Team Alpha Male for that.”

After four years of tearing through opponents on the California circuits, Fili finally got the call from the UFC that he was going to be making his long awaited debut against The Ultimate Fighter 15 alum Larsen. Of course, there was one caveat - the featherweight tangle was in less than two weeks, which is problematic enough for most, but was a major issue since Fili was in the process of gaining weight for a welterweight bout. Besides any / all UFC jitters, Fili would be fighting outside of California for the first time and would need to cut from 178 pounds to 146 pounds in less than 14 days.

“I was at my day job when I got the call from my management,” remembers Fili. “They told me that I fight in two weeks, but it was at 145. I clocked out of work and went to the gym and started running. I’ve dealt with a lot of weight cuts before, so I was no stranger to that. When I was hungry and when I was on a stage, it was a really bad feeling to have my first UFC weigh-in go that way. I was feeling really down on myself and feeling a lot of shame, like I let everyone down. Once I got back to my hotel room and rehydrated and got some food in me, I started thinking more clearly. I pushed that all away and just focused on the fight. What was done was done. I didn’t want to dwell on it. It still really bothered me and I knew I had something to prove - I knew that I needed to win that fight. Because of the weight cut and everything else, I had to make a good impression with a win.”

The official scale read that Fili was 2.5 pounds over, which was truly a valiant effort to shed 30 pounds in that short of time. As mentioned, the performance in the cage would mean more than the weight on the scale and that’s where Fili delivered tenfold. Locked inside the Octagon with a hard-headed and heavy-handed striker like Larsen, Fili pushed the pedal to the metal from pillar to post in the first five minutes with a wide variety of stand-up attacks, which staggered and cut his opponent early. In the second, Fili scored with a pair of power punches which dropped Larsen, and some ground and pound sealed the victory.

“I’m very happy with the win,” asserts Fili. “It’s like a childhood dream come true to get that win in the UFC. I don’t even have words for it for how good it felt to win in the Octagon. But I’m not happy with my performance. I felt sloppy. I felt tense, a little apprehensive. I wasn’t flowing as well as I wanted. I wanted to just get in there and get that knockout because I wanted to make an impression and I wanted to get it over with, really. I plan on being a lot more precise, a lot more fluid, and an all-around more technical fighter in this next fight.”

Up next, Fili travels to Baltimore, Maryland for UFC 172, where he will collide with Hawaiian striking ace Max Holloway. With an 8-3 pro record, including seven fights inside the Octagon, the 22-year-old is a cardio machine who easily rattles off a hundred significant strikes a fight and has already scored a Knockout of the Night win this year. One of several young UFC fighters trained by Rylan Lizares at Gracie Technics, Holloway is a confident and aggressive stand-up specialist who has already fought a lot of top competition in his two years in the UFC.

“I’m a Max Holloway fan,” admits Fili. “I almost always root for him when he fights. I guess I can’t do that this time. He seems like a really cool guy and he’s a really exciting fighter. He’s young like me. I think stylistically we’ll match up really well because we’re both young, hungry guys. We’re long and lanky 145ers who come to fight. Neither of us back down, and I think it could be Fight of the Night.”

In preparation for Holloway, Fili is sharpening his skills with the renowned talent at Team Alpha Male. “You’re going to get your ass kicked, but you’re going to get better as well,” states Fili about training with household names and highly-ranked UFC fighters like Urijah Faber, Joseph Benavidez, Chad Mendes, and the list goes on and on. As for coaches, Fili has former K-1 kickboxing champ Duane “Bang” Ludwig for striking, BJJ black belt Fabio Prado for jiu-jitsu, and a whole team of great wrestlers like four-time NCAA Division I All-American Lance Palmer for wrestling.

“I have some guys in my camp who are built a lot like Max Holloway and I’m building a game plan around what I think are his strengths and weaknesses,” affirms Fili. “A fight’s a fight, and you have to go in there with a game plan, but you also have to be ready to adapt because that’s usually not how it goes. I’m going to go in there and fight him and he’s going to fight me and we’re going to figure out who is better. Fight fans should expect more of the same from UFC 166 as far as being aggressive and looking for the finish, but I’m going to be throwing much more technical, tight punches, and a lot more combinations. I’m going to be mixing a lot of techniques together. I’m looking to put on a really exciting fight and make a name for myself, but I’m going to do it a lot more technically sound. I’m going to stay tight, mix up my techniques, and it’s going to be a good show.”

This Saturday in “Charm City”, a frenzied featherweight fracas will aim to excite and get the blood pumping, as Fili clashes with Holloway. “I feed off the pressure of people watching me fight,” declares Fili, whose performance art is pain and whose canvas will be his opponent’s face. “MMA is being on a stage and expressing how you feel. I fight pretty aggressively. It’s all an expression of who I am and I think that comes out in the way that I fight.”