Andre Fili Is Doubling Down On Himself

Andre Fili knows he's lost fights before, but he believes he hasn't lost his last two that have gone to the judges. So he's not making changes for UFC Vegas 2
By Zac Pacleb, on Twitter: @ZacPacleb • Jun. 12, 2020

If you ask Andre Fili, he’s on a six-fight winning streak. Kind of.

To challenge NFL Hall of Fame coach Bill Parcells’ adage of “you are what your record says you are,” Fili strongly feels the judges got the scorecards wrong in his decision losses to Michael Johnson and Sodiq Yusuff.

Fili is a smart guy, so he knows the decisions are final, but in terms of how he lets past results impact his preparations for his June 13 bout against Charles Jourdain, he hasn’t felt the urge to go back to the drawing board.

“I’m heartbroken about the losses, but I’m not ashamed about my performances,” he continued. “I just think (doing) more of the same. I think I’m doing the right things. I just need to double-down, triple-down on them. Quadruple. Quintuple-down.”

That confidence is more than understandable when considering Fili’s time spent in the UFC. Compiling a 8-6 record inside the Octagon since joining the roster in 2013, the 29-year-old chooses to focus on maintaining the momentum he believes he has built over the last two-and-a-half years.

Standing across from him is an exciting up-and-comer in Jourdain, who secured his first UFC win with a second-round TKO over Dooho Choi in Busan last December. The Canadian is building a reputation as an exciting, flashy striker, and Fili is relatively stern in his evaluation of him.

“He’s aggressive. He spams flying knees, so you gotta watch out for that,” Fili said. “He seems to be pretty athletic, and he believes. Every shot he throws, he really believes. You can tell he believes in his striking, so I’m excited to put that to the test. 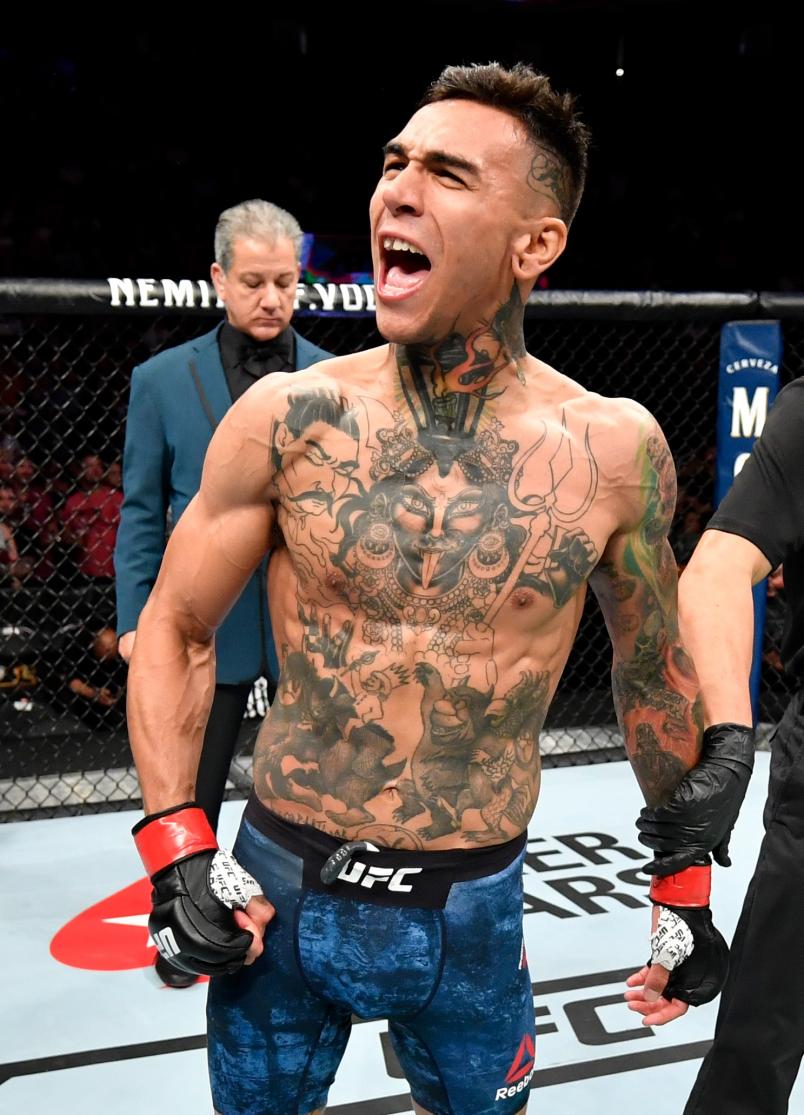 SACRAMENTO, CALIFORNIA - JULY 13: Andre Fili reacts after his knockout victory over Sheymon Moraes of Brazil in their featherweight bout during the UFC Fight Night event at Golden 1 Center on July 13, 2019 in Sacramento, California. (Photo by Jeff Bottari/Zuffa LLC/Zuffa LLC via Getty Images)

SACRAMENTO, CALIFORNIA - JULY 13: Andre Fili reacts after his knockout victory over Sheymon Moraes of Brazil in their featherweight bout during the UFC Fight Night event at Golden 1 Center on July 13, 2019 in Sacramento, California. (Photo by Jeff Bottari

Looking at Fili’s body of work, ever-improving skillset and still relatively young age, it’s hard to not believe his time is around the corner. Heading into his UFC 246 clash with Yusuff, Fili had won four of his last five fights and became the only person to knock out Sheymon Moraes in an emotional performance in Sacramento.

The bout with Yusuff was closely contested, and while Fili holds plenty of respect for him, he thought he did enough to secure the victory. He didn’t, however, and Yusuff found himself in the top 15 for the first time.

Those sliding door moments seem to come often for Fili, who has shown he has the goods to compete in a talent-rich featherweight division. With that in mind, he’s looking to put the brakes on a Canadian hype train that is in itself trying to gain traction. A win might not earn him a number next to his name, but in his mind, it’ll continue a strong stretch of seven fights that could find Fili back in the rankings mix.