"We get after it, man. I don’t think any other team spars like we do. We beat the hell out of each other, but we take care of one another as well." - Andre Fili 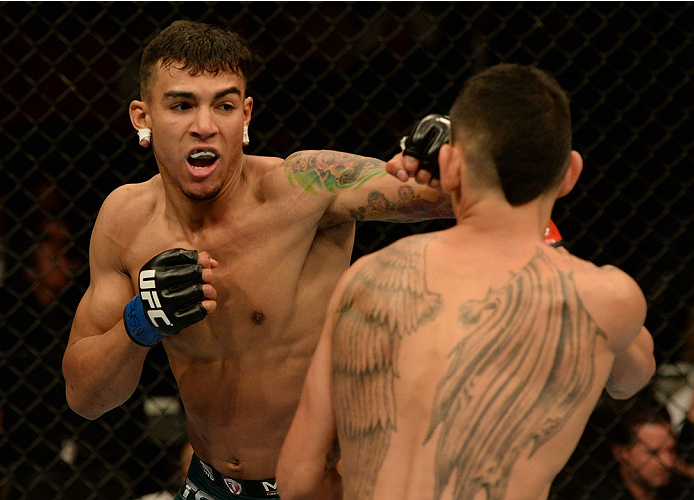 Talent and technique go a long way in MMA, but a passionate love for the scrap can work wonders inside the Octagon. Andre Fili may be a young prospect on the rise with time on his side to sharpen those previously mentioned aspects, but his appreciation for the ruckus is already there in spades. “Touchy” loves to throw down and he’s in the perfect profession to serve those impulses.

As for the evolution of his skill set, the 24-year-old Washington native relies on his Team Alpha Male squad to provide that push. The Sacramento-based collective has proven to be one of the elite gyms in the sport, with a host of current and former champions and contenders crowding lining their roster. Walking into the gym on a daily basis and mixing it up with the likes of perennial title contender Urijah Faber and reigning bantamweight champion T.J. Dillashaw has forced the California transplant to fast track his development, and Fili wouldn’t have it any other way.

Diving headlong into a grinder of that caliber is either going to make or break a fighter, and from the results Fili has produced since his arrival in the “City of Trees,” he’s certainly of the latter variety. His tattoos and tangible charisma may be a step outside of TAM’s standard clean-cut, All-American presentation, but once he steps in to do business, his affiliation with the title hungry NorCal crew comes front and center.

“We get after it, man,” Fili said. “I don’t think any other team spars like we do. We beat the hell out of each other, but we take care of one another as well. There are certain gyms where they go 100 percent and try to hurt each other, but that’s not what we do. We have a perfect chemistry at Team Alpha Male because we push each other hard but everyone helps build everyone else up in the process.

“I’ve been with the team for four years and the intensity took some adjusting to. I was 19 when I joined the team and I had never seen sparring like that. I thought I was a 155er and Justin Buchholz and Danny Castillo beat the hell out of me every week until I realized I was a 145er. In my opinion, our team is the best in the world and I truly believe we have something special. We have a bunch of guys who are established and are the best fighters in the world, but we also have a group of talented fighters no one has heard of yet.  Iron sharpens iron and we have a lot of big things coming.”

While Fili’s time under the UFC banner is still in the early stages, it has been a chaotic stretch for the Tacoma native. He made his debut on two weeks’ notice and cut a large amount of weight to make that happen. Yet the sacrifice proved to be worthwhile as he earned a second round TKO victory over Jeremy Larsen at UFC 166.

He had far more time to prepare for his second outing as he faced fellow upstart Max Holloway at UFC 172 back in April. The bout was a matchup of two talented featherweight prospects and figured to be an action-packed affair. And while the ruckus certainly ensued once the two fighters collided, it was Fili who would end up on the business end of a guillotine choke from the scrappy Hawaiian.

Despite suffering the loss, Fili left Baltimore with his head held high. He knew it would be a learning experience and one he would come to appreciate.

“It was crazy experience because the first fight was so hectic,” Fili said. “I didn’t get to enjoy the process because I took the fight on two weeks’ notice and had to cut 30 pounds. I went out there wanting to finish the fight as quick as possible and I got the TKO. As for the second fight, I really enjoyed everything that went into it. I had an eight-week camp that went great and I really thought the fight against Max Holloway was going to make a real statement at 145. I thought I was going to solidify myself in the weight class.

“I felt as close to perfect as I’d ever felt and the fight didn’t go my way. It was really like the exact opposite of my first fight. It was a pretty crazy experience going from a short camp and winning to getting a long camp and losing. I feel like I had a lot of hype coming in and I dropped the ball. I’m embarrassed by it. It made me reassess some things and I’m excited to get back. I think I have a lot to prove. I need to prove I belong in the UFC and my first fight wasn’t a fluke.”

Fili will get the chance to do just that this weekend at UFC 179. He will step into the Octagon to face Felipe Arantes - another fighter who has built his reputation for being tough as nails. While there are drastic stylistic differences between the two fighters, Fili believes all the elements are there for a memorable battle in Brazil.

To put it bluntly: He wants that bonus. And he’s willing to bring the violence directly to his Brazilian opponent on his native soil to get the job done.

“I think this fight with Arantes could easily be Fight of the Night,” Fili said. “We both come to fight. I’m not a safe fighter and I take risks. I come to fight and that’s how it always been. Arantes is the same way. He likes to throw, and even when he’s on top of guys, he puts everything in his punches and he’s trying to hurt you. I’m the same, where the entire 15 minutes I fight you I’m trying to put you away.

“I want to walk away with a big bonus because we are going to put on a show. I can definitely guarantee that. We are going to beat the hell out of each other and I’m going to come out on the winning end of it. I’m going to finish him.”