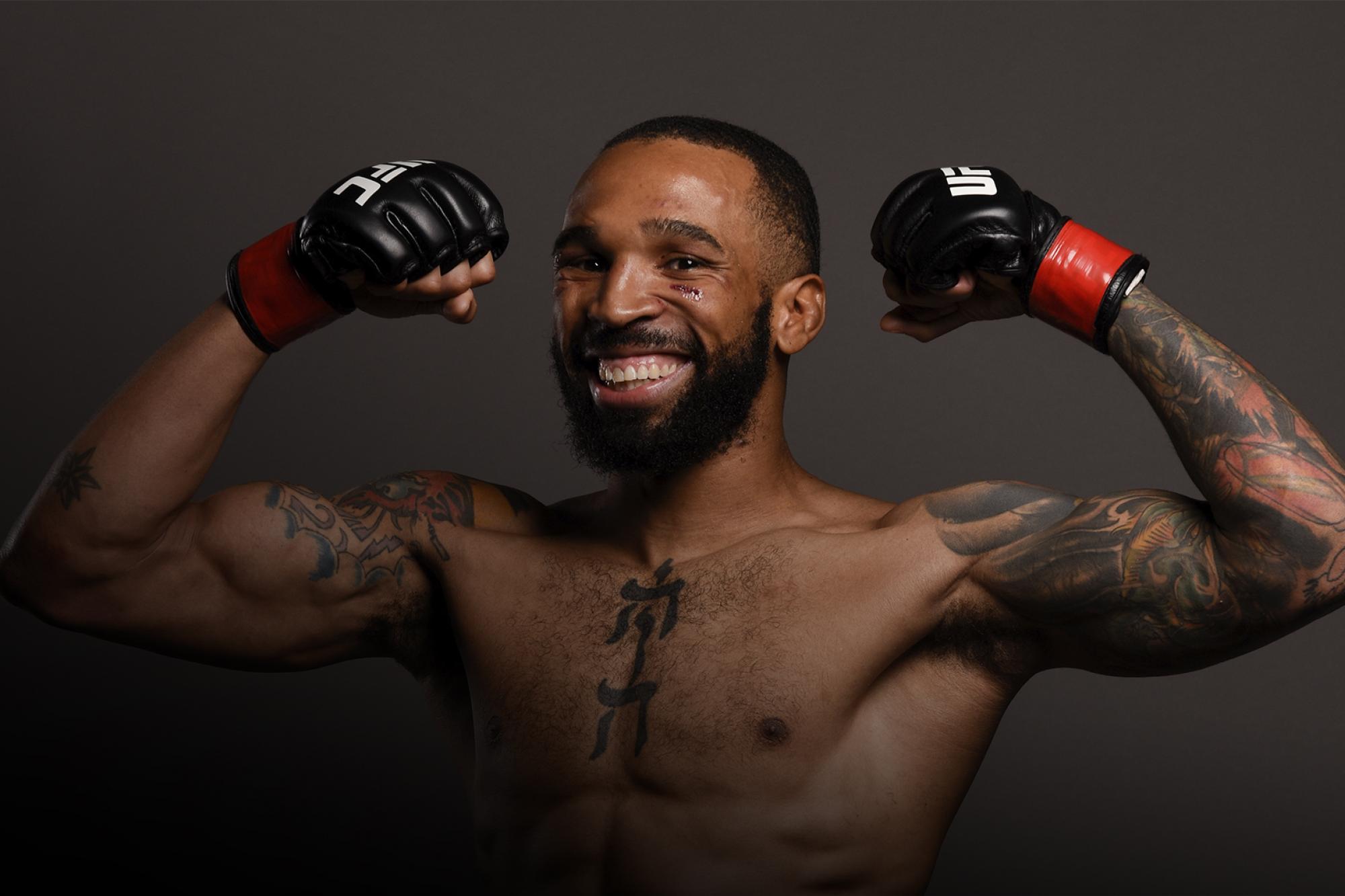 Andre Ewell In A Better Place A Year Later

A year later since his Octagon debut, Andre Ewell is in a better place these days.
By E. Spencer Kyte, on Twitter @SpencerKyte • Oct. 7, 2019

Set to begin his sophomore year as a member of the UFC roster on Saturday, Andre Ewell will step into the Octagon in a much better place than he was 385 days earlier when he crossed that threshold for the very first time.

The 31-year-old California native made a splash upon arriving on the big stage, venturing to Sao Paulo, Brazil for his first assignment, where he edged out former champion Renan Barao by split decision. While his come-from-behind performance during the 15-minute battle opened some eyes, Ewell’s post-fight interview pulled on some heartstrings, as the exciting new addition gave a brief glimpse into the challenges he’s faced outside of the cage, including his struggle to remain a part of his son Eli’s life.

The win over Barao pushed his record to 14-4, with a 9-1 mark over his previous 10 bouts, but then Ewell ran into a bantamweight buzzsaw named Nathaniel Wood, who swiftly halted his five-fight winning streak. But after ending 2018 on a loss, the affable and talkative 135-pound hopeful kicked off his 2019 campaign with an entertaining performance opposite Anderson dos Santos in June, getting back into the win column and once again moving forward in the talent-rich weight class.

As is often the case, life was imitating art for Ewell, with the ups and downs of his freshman year as a UFC fighter mirroring the highs and lows of his personal life.

“Truth be told, at the beginning of the year, it actually got worse,” he said regarding his ongoing quest to be a part of his son’s life. “They’ve taken away my rights of being a father, so I’m still trying to figure that out and how I should be going about the process and continuing to fight, but it’s all about having the right direction for me to try to be involved.

“I know there is going to be a time when he’s going to try to figure out who his real dad is and what is going on and he’s going to understand the whole truth and what really happened and how hard I was fighting for him.

“But from that, I ended up getting some bright news,” he added. “On the day when I signed my contract, I found out my lady is pregnant and we’re having a child in April 2020.”

The excitement is evident in Ewell’s voice, as it almost always is, because despite having myriad hurdles placed in front of him, the talented fighter who will be making his 14th appearance since 2017 on Saturday has constantly found the resolve to pick himself up each time he’s been knocked down.

“There are moments where it becomes depressing and going into my fight with Nathaniel, it kind of sideswiped me, knowing that I had court a couple days after my birthday (towards the end of January), but things happen for a reason,” he said. “Me fighting to be in my son’s life ended up resulting in more people noticing me and paying attention and wanting to know my story and then people who are going through the same thing reach out and look at me and say, ‘If he’s going through it, I can too,’ and they’re using me as motivation to go forward.

"Things are flowing in positive directions because I’m looking for answers, so I’m trying to be the best person I can be because when that time comes when me and my boy are back together, he’ll be able to see what I’ve gone through and use that as strength for himself.”

With a year on the roster under his belt and firmly established as a member of the bustling bantamweight division, Ewell has set his professional sights on bigger goals and sees this weekend’s showdown with Vera as a perfect opportunity to set his plan to achieve them in motion.

“If you’re not doing the extras besides just fighting, people aren’t going to see you,” said Ewell,  who has an entire Instagram collection of him dancing and promises to have something special on tap should he get his hand raised Saturday. “You have to be doing the extras. You have to know how to promote yourself. You have to be that person that people end up loving and wanting to watch every time.

“I don’t only want to fight in the U.S. — I want to fight in different countries, travel overseas, so that they can understand that I’m a great fighter and so that in 20 years, they’ll still be talking about me. That’s my goal.

“He’s a pretty cool cat, really dangerous and people know him,” he said of his opponent. Vera, who hails from Ecuador and sports an 8-4 record in a dozen trips into the Octagon. “He has a country on his back and I’m honored I get the chance to fight someone like that because his fans will end up respecting me for taking him on and beating him.”

Beating Barao in his promotional debut set a pretty high bar for Ewell as far as name-brand wins are concerned, but while toppling the former champion certainly carries a great deal of cache, getting the better of Vera on Saturday night will likely prove to be much more difficult.

Fighting in the UFC since late 2014, the 26-year-old Vera has grown up inside the Octagon and is now starting to showcase the elite talent that only appeared in flashes during his first couple years on the roster.

After back-to-back losses to John Lineker and Douglas Silva de Andrade five months apart, Vera has rattled off four straight victories, all by stoppage, following up his wins over Wuliji Buren and Guido Cannetti in the second half of last year with a first-round finish of Frankie Saenz and a second-round submission win over Nohelin Hernandez at UFC 239 in July

So while he knows Vera is in top form and enters the contest as the betting favorite, there is still only one way Ewell sees things playing out this weekend.

“I definitely see him bringing it and trying to out-dog me in the fight, bring me out into deep waters, but not realizing that I can actually go to the deep waters,” he forecasted. “I’m going to end up owning it. It’s going to be me schooling him — out-techniquing him, out-dogging him for the whole fight.

“Fans are going to see me very aggressive and me landing a KO,” he added. “That’s how I’m getting my hand raised and then I’ll have a victory dance for the whole world to see.”