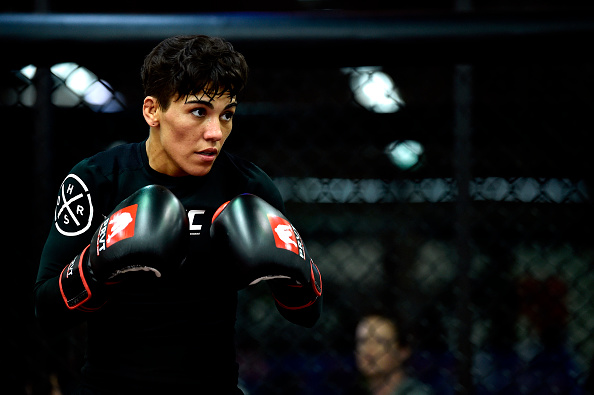 Jessica Andrade of Brazil holds an open workout for fans and media at UFC GYM Orlando on February 21, 2018 in Orlando, Florida. (Photo by Jeff Bottari/Zuffa LLC/Zuffa LLC via Getty Images)" align="center" />
Four and a half years ago, Jessica Andrade arrived in Seattle as a short-notice replacement scheduled to take on Liz Carmouche, who was competing in her first bout since challenging Ronda Rousey in the inaugural women’s bantamweight fight in UFC history.

The diminutive Brazilian was a mystery to most outside of her home country – a pint-sized powerhouse chosen to replace Miesha Tate, walking into the Octagon for the first time sporting a 9-2 record, seemingly unfazed by the bright lights of the UFC or the idea of debuting on network television.

Saturday evening in Orlando, Andrade will make her second appearance on a UFC on FOX card, squaring off with Tecia Torres in the co-main event of the evening that will have a serious impact on the title picture in the strawweight division.

“It’s pretty interesting that it took so long for me to be on FOX again,” said Andrade, who will be stepping into the Octagon this weekend for the 13th time, the most of any female in UFC history. “I believe I’m much more skilled now. I’m a completely different fighter. I think I’m going to put on a much more interesting performance this time around than last time I was on FOX.

“If they didn’t catch any of my previous fights,” she continued, speaking through her translator, Tiago Okamura, “I think they’re going to like what they see. If they only catch this one, I’m pretty sure I’m going to stay in their mind.”

In the time between her debut against Carmouche and this weekend’s clash with Torres, Andrade has established herself as one of the top talents on the women’s roster. After compiling a 4-3 record while competing as an undersized bantamweight, the 26-year-old Parana Vale Tudo product relocated to the 115-pound ranks, where she proceeded to take the division by storm.
RELATED CONTENT: Torres believes the winner of Saturday could get a title shot

Victories over Jessice Penne, Joanne Calderwood and Angela Hill delivered Andrade into a championship pairing with Joanna Jedrzejczyk before the one-year anniversary of her arrival in the division. Though she came out on the wrong side of the result against “Joanna Champion,” she acquitted herself well and cemented her standing as one of the elite competitors in the highly competitive division with a lopsided decision win over Claudia Gadelha in her return to the cage last September.

That fight seemed to be personal for Andrade, who has chaffed by her opponent’s decision to leave their shared homeland in order to train with Greg Jackson disciple Chris Luttrell’s team in Albuquerque, New Mexico.

“I wouldn’t say it was a personal thing, the fight with Gadelha in Japan,” began Andrade when asked about the clash in Saitama, Japan, which earned the duo Fight of the Night honors and stood out as one of the best bouts of 2017. “I have so much respect for the people that are around me, the people that put me in the position that I am in today and I think it was important to show something different from what everybody keeps talking about back in Brazil and all over the world really, asking me, ‘When are you moving to the U.S.? When are you going to change camps?’

“I felt the need to show people that you have to be the agent of change,” she continued. “You don’t need to go and move away and go and find something else when you have the power and the skill to make your place better, make your home better. That’s what we’re working on – trying to make what we have back home just as good as anywhere else.”

So far, the results have been tremendous for Andrade, especially since shifting divisions.

In addition to piling up a 4-1 record and becoming a fixture in title discussions, the aggressive offensive dynamo has racked up record-breaking striking numbers, including landing a staggering 242 total strikes in her bout against Gadelha, which was only a three-round fight.

It’s the same approach Andrade employed while she was out-performing expectations at bantamweight and the one she intends to deploy again this weekend when she squares off with Torres, another high-output athlete looking to move one step closer to challenging for the title in 2018.

“I really like the matchup because it’s the kind of fight where for sure the fans are going to get a show out of it,” Andrade said of this weekend’s penultimate pairing. “She’s very aggressive, I’m very aggressive and it’s a fight where no fans should be blinking at any point because we’re coming after each other.

Tabbed as a future title challenger from the time she made her professional debut at Invicta FC 3, Torres has lived up to expectations to this point in her career. Sporting a 10-1 record overall and 6-1 mark in the Octagon, “The Tiny Tornado” has split a pair of matchups with reigning champ Rose Namajunas and arrives in Orlando on a three-fight winning streak.

With both women stationed in the Top 5 and the championship rematch between Namajunas and Jedrzejczyk just six weeks away, many believe Saturday’s co-main event could determine who is next in line to challenge for the belt, including Andrade, who prepared for this weekend’s contest as if it were a title fight and will be prepared to make the most of her second chance to claim UFC gold whenever that opportunity comes.

“After the fight with Gadelha, considering that Rose got the win, we were expecting a title fight to be next,” admitted Andrade. “But the UFC chose to give Joanna the rematch and that’s fine. Now we’ve got to do this one and we’ll see how it goes. I’m pretty sure that with a win, we’ll get a title shot again.

to be in my corner,” she added. “We’re training for everything and training as if this were a title fight and when the time comes, I’m going to be in the best shape of my life to get the belt, unlike what happened in Dallas.”

As for how this weekend’s affair will play out, Andrade kept her thoughts short and sweet.