Ask Jessica Andrade if she’s thought about how May 13 will look like for her, and she hasn’t just pondered the day she challenges Joanna Jedrzejczyk for the UFC strawweight title. She has the whole day and night planned out.

“I will wake up, have a nice light breakfast and work out a little bit in the morning to get my juices going,” she said through manager / translator Tiago Okamura. “Head over to the venue, put on one of the best strawweight performances the UFC has ever seen, get that belt around my waist, go to the press conference, get a performance bonus. And from there I can go to my after party and enjoy how the day went.”

It’s a long way from September 2015, when Andrade had lost a rematch with Raquel Pennington that left her with a 4-3 UFC record. Despite that slate, she was clearly one of the best bantamweights on the roster, but at 5-foot-1 ½ with a 35” reach, the Parana native was stepping up to the plate with an 0-2 count every time. Of course that never stopped her from trying to battle bigger opponents.

“It was nothing new,” she said of her time at 135 pounds. “I have fought girls as big as 155 in my career in Brazil, so fighting bigger people has been the story of my life. But when you add the size difference to how good the level of these girls is at the UFC you start running into some very, very hard fights. When I got to fight girls closer to my size, even at bantamweight you could see the huge difference in performance.”

By the time of Andrade’s rematch with Pennington, Jedrzejczyk was already queen of the 115-pounders and was preparing for her second title defense against Valerie Letourneau. Andrade made the decision to join her future rival in the strawweight division. In June of last year, she debuted with a second round stoppage of Jessica Penne. A Performance of the Night submission of Joanne Calderwood and a Fight of the Night decision over Angela Hill followed, and just like that, “Bate Estaca” has become one of the most feared fighters in the division.

And she’s loving it.

“I feel like at strawweight I’m finally getting to become a proper professional fighter,” she said. “The results have been great proof that it was the right decision at the right time, but if I didn’t get the experience at bantamweight first I don’t know if I would have had the success at strawweight I’m having now.” 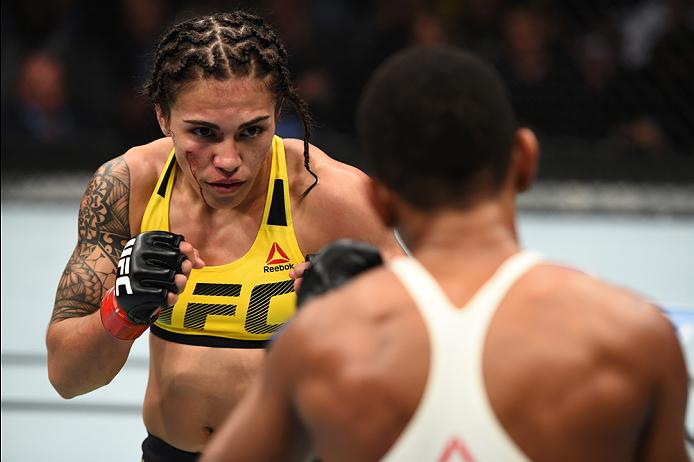 Call it the School of Hard Knocks, but that’s been nothing new for the 25-year-old, who has been fighting in one way, shape or form since she was in high school. Along the way, the humble battler has become a role model for women back home in Brazil, something she is still getting used to.

“I’m not sure about being comfortable about that, but I guess it’s not something you choose, it just happens,” she said. “I have gone thru a lot to get to where I am today, so I think to some extent I can be that for them.”

She can also be a shining light for all fighters in Brazil, as a win in the UFC 211 co-main event will see her join Amanda Nunes as female world champions for the nation, with Nunes’ hope that Cris “Cyborg” Justino will soon join them.

“It (winning the title) would mean all we have to do is wait for Cyborg to take that belt (UFC featherweight champion) Germaine (de Randamie) is holding up and Brazil would have total dominance of WMMA in the UFC. For me it would be more than a dream come true as, let’s be honest, when I joined the UFC there was no hope in hell I could become a champion at 135 and that was the only division in the promotion, so even thinking about a belt was out of reach. We hoped for 125 for a long time and when they skipped that one to do female 115, my dreams got thrown out the window again. But back then, as much as my support team knew I could make 115, I didn’t believe it, but here we are today. I’m 20 pounds lighter and taking on a defending champion for her belt.”

It’s a Cinderella story for sure, but there is still the reality that Andrade has to face and beat Jedrzejczyk, who has successfully defended her crown four times since defeating Carla Esparza in 2015. That’s a daunting prospect for any 115-pounder, and while Andrade is confident of victory, she’s also respectful of the champion’s skill set.

“She is a phenomenal striker with some of the best takedown defense in the UFC,” Andrade said of Jedrzejczyk. “Plus, she has the habit of making sure you pay for every failed takedown attempt which makes her game very interesting to watch and especially hard for a pure grappler to deal with. Since I’m not really a pure striker or pure grappler, I think I will eventually have to deal with her takedown defense, but first I have to deal with her long range striking, which is very sharp. I normally don't mind taking a punch to land one of mine, as I know I usually overpower my opponents once I can get inside, but with someone like her over five rounds, I have to be extra careful.”

Careful, but not tentative, as a fighter like Andrade, who has been compared to Wanderlei Silva, is at her best when charging forward, fists flying. It’s why UFC fans can’t wait for May 13 and why many of them are calling this a bout with Fight of the Year potential. That’s a lot of pressure on top of winning a title, being a role model and bringing the belt home for Brazil, but the challenger is as cool as ever.

“All the pressure is on her,” Andrade said. “She is the one with the legacy in the division, she is the one getting close to her 30s, she is the one saying she wants to stop fighting to start a family, so all the urgency is on her side. I’m still 25 years old and getting my first title shot. All I have to worry about is being in the best form possible and performing to the best of my abilities.”