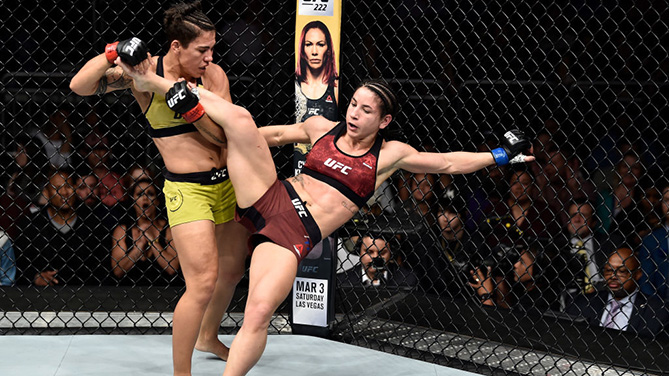 Brazil’s Jessica Andrade may have stamped her ticket to a second shot at the strawweight title with a hard-fought three-round unanimous decision over Tecia Torres in the UFC Fight Night co-main event at Amway Center in Orlando.

Torres’ striking was sharp in the first round, as she repeatedly tagged the aggressive Andrade. Andrade kept the pressure on, though, landing several hard shots of her own before delivering a thunderous slam just before the end of the frame.

In the second minute of round two, Andrade dumped Torres to the mat again, and after a spell on the mat, Torres got to her feet and fired off some hard shots before another Andrade slam. With a minute left, Torres looked for an armbar and then landed an upkick, but the Brazilian’s power was ruling the day, and that was never more evident than in the third round, as Andrade simply swarmed the game Torres, utilizing a smothering ground game until the final horn.

UPSET SPECIAL! Ilir Latifi with the biggest win of his career, locks in the front guillotine for the win over Ovince St. Preux! #UFCOrlando https://t.co/5RotEZzsFS
— FOX Sports: UFC (@UFCONFOX) February 25, 2018

No. 8-ranked light heavyweight contender Ilir Latifi made it two straight wins in impressive style, submitting No. 5-ranked Ovince Saint Preux in the first round.

Saint Preux (22-11) was able to control the action from range for much of the first round, but with a little over 90 seconds remaining, Latifi (15-5, 1 NC) scored with a short left hand that put OSP on the deck. Saint Preux appeared to recover quickly, but Latifi went all in for the finish and had his foe on the run, putting him on the canvas a second time with another left to the head. This time, Latifi sunk in a standing guillotine, and that ended the fight, with the official time of the finish coming at 3:48 of round one. 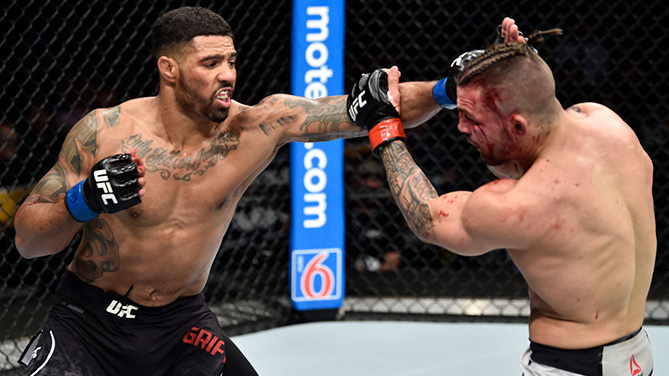 A quick combination by Griffin opened up a cut on Perry’s forehead in the opening minute, but Perry didn’t stop throwing the bombs that he hoped would end the fight early. Griffin used his reach advantage well, though, as he kept Perry at bay with kicks to the legs and body while moving smoothly around the Octagon. In the closing minute, the two traded takedowns, with Perry holding the edge when it came to control on the mat.

Griffin began tagging Perry with right hands early in round two, all of them getting the Floridian’s attention. But it was the left hand that put the bloodied Perry on the deck with 43 seconds left in the frame, and while some more ground strikes followed, Perry was able to survive, get back to his feet and make it to the end of the round.

Refusing to go away, Perry rattled Griffin with a right hand to begin round three, and midway through the round, he landed two more bombs. A head kick in the final minute had Griffin on the defensive, but Perry simply ran out of time to get the finish.