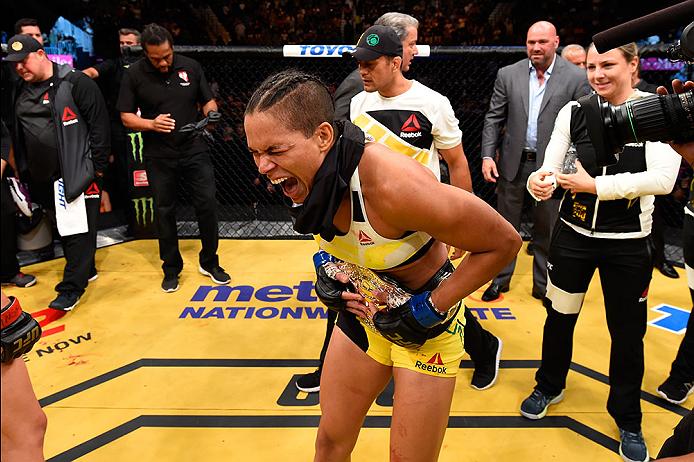 “Miesha is a tough opponent, I respect her a lot, but I’m the new champion,” the 28-year-old Nunes said of her win, which came in front of 18,202 fans, a Las Vegas record for a UFC event. And to get it, she just had to take her time.

"My plan for this fight was to work on my patience. I knew I had everything to beat Miesha. I just had to take my time and wait for the right moment."

It came sooner than most expected.

Las Vegas’ Tate got on the board first with a takedown one minute into the fight, but Nunes bounced up immediately, nullifying the move. Moments later, another takedown attempt ended in an even worse fashion as Tate ate a knee on the way up that stunned her. Sensing the finish, Nunes went for it, bloodying Tate with her punches and putting the 29-year-old into a defensive shell. Looking for one last attempt to turn things around, Tate shot for a takedown but Nunes wouldn’t be denied, as she pushed Tate aside and sunk in a rear naked choke that produced a tap out at 3:16 of the first round.

With the win, Nunes moves to 13-4; Tate falls to 18-6. Since Ronda Rousey lost the women's 135-pound title to Holly Holm in November of 2015, each subsequent champion (Holm and Tate) has not made a single successful title defense. Nunes hopes to break that curse, and she's willing to take on all comers to do it.

"I'm the champion," Nunes said. "Whatever (UFC President) Dana White puts in front of me, I'm gonna take it."

As for the former champion, Tate took the defeat with grace.

"I trained very hard for this fight," she said. "I just got caught. I've been telling everybody that Amanda is very worthy to be here. Maybe if we get a chance to do it again, it could be different, but tonight is what it is. It's not about me tonight, it's about Amanda. She did what she came to do and I have the utmost respect for her."