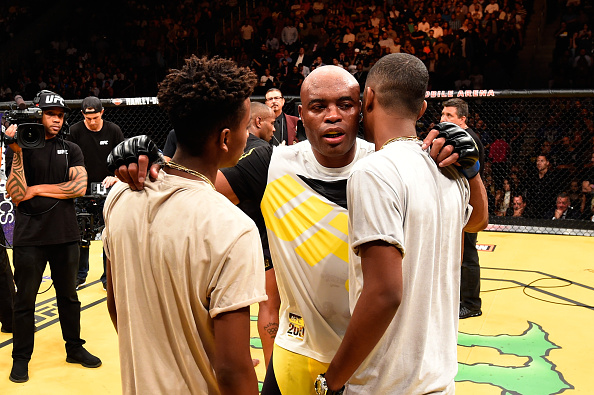 Former UFC middleweight champion Anderson Silva steps into the Octagon on Saturday at Barclays Center to face Derek Brunson in UFC 208 co-main event. And while fans worldwide will be rooting for The Spider, two of Silva’s five children, Gabriel and Kalyl, will be Octagon-side for what is just another day at work for their father.

Following Silva’s open workouts at Gleason’s Gym in Brooklyn on Thursday, they discussed their father’s important legacy — as a sports hero, and as a parent — and how it feels to be the son of arguably the greatest mixed martial artist of all time.

“I like to go along with him to his fights because I grew up watching him become the fighter he is now,” said Gabriel, 19, the eldest son and the one Silva says knows the most about fighting. "I pay a lot of attention to details and try to help him at what he can improve on as we’re always talking.”

Kalyl, 18, agreed with his brother. For him, the exciting atmosphere of fight week is what he enjoys the most.

“It’s something I don’t see everyday,” Kalyl said. "Before, I used to get really anxious, but I’m used to it now. He’s very prepared and I’m sure he’ll do great in the Octagon and do his job.”

Both Gabriel and Kalyl train everyday at Silva’s gym in Los Angeles. Despite being fond of fighting, they most likely will not follow their father’s legendary path and become professional mixed martial artists. But they are very grateful for everything the sport has done for their family.

“It’s just crazy. I keep thinking as I lay down on bed before I sleep about all of this, and I just can’t find the words to describe it,” said Kalyl, his words filled with emotion. “We used to live in a one-bedroom house, he used to work at a restaurant, and now here we are. It’s just crazy."

Said Gabriel, “It’s very satisfying, especially for us, because we watched his development very closely. He’s still humble and true to his ideas. We always learn something new talking to him."

At 41, this will be Silva’s 22nd appearence in the Octagon. The former champion has considered stepping away once, following his crushing loss to Chris Weidman in 2013, claiming retirement was his family’s wish. But he didn’t stay away for long, returning to the sport only six months later. His children tend not to disagree with him.

But both of them ruled out retirement for their father, insisting that Silva should keep doing what makes him happy – and, ultimately, that is fighting.

“He still has a lot of it inside him,” Kalyl said. "Before, I wanted him to quit, but this is all part of him. My dad’s been doing this since he was 15 years old, his whole life is in it. I don’t want him to stop doing what he loves the most.”

Gabriel agreed. “I was always against the idea of him retiring. He must keep training and getting in the Octagon while he has the energy and the health to do so,” he said. "If that’s what’s keeping him happy, I’ll always be there supporting him.”