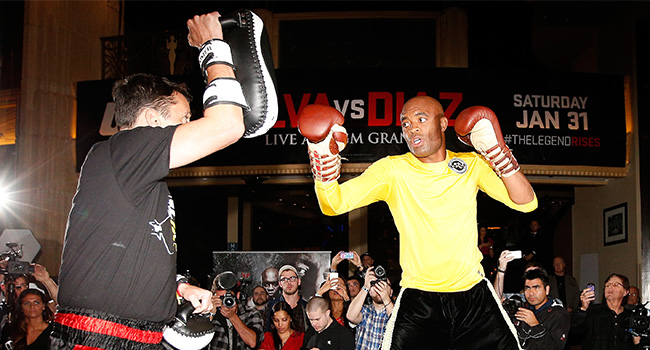 Anderson Silva hit pads and grappled with teammates for about an hour just outside the sports book in the MGM Grand casino on Wednesday afternoon to officially kick off fight week with the UFC 183 Open Workouts.
Fans clamored for just a glimpse of “The Spider,” who is fighting for the first time since breaking his leg against Chris Weidman at UFC 168. Men, women and children were almost climbing on top of each other to reach their cell phones high enough to snap a picture or shoot a few seconds of video.
Silva received the rock star treatment, and he didn’t disappoint. The former UFC middleweight champion signed autographs and took pictures with fans before and after his workout.
The joy on his face was present throughout the afternoon, as Silva joked with teammates and even invited a young fan up on stage for a moment to say hello.
“I am very happy,” Silva said. “After the year that I’ve had and the horrible things I’ve went through over the past year I am very happy and very excited. I just pray to God for him to lead me through this fight. I’m happy to be back.”
Absent at the open workouts was Silva’s UFC 183 opponent, the enigmatic Nick Diaz, who missed his flight on Tuesday.
Diaz has since arrived in Las Vegas, and Silva said the only issue with Diaz not being there was that it was unfortunate for the fans that came out.
“The fans are the ones that missed out,” Silva said. “That’s unfortunate, but he missed his flight. It’s just unfortunate for the fans.”
During his workout, Silva looked like his old self. He threw power kicks and put that famed striking accuracy, speed and power on display as DJ Albert Lineses rocked the house with an energetic set of music.
Next up is the UFC 183 Media Day, which happens at noon Thursday at the MGM Grand in Studios A & B. The event is open to the public and will include UFC President Dana White, Silva, Diaz, Kelvin Gastelum, Tyron Woodley, and more.