Silva, the greatest of all time, is treating Nick Diaz like the first fight of his career. 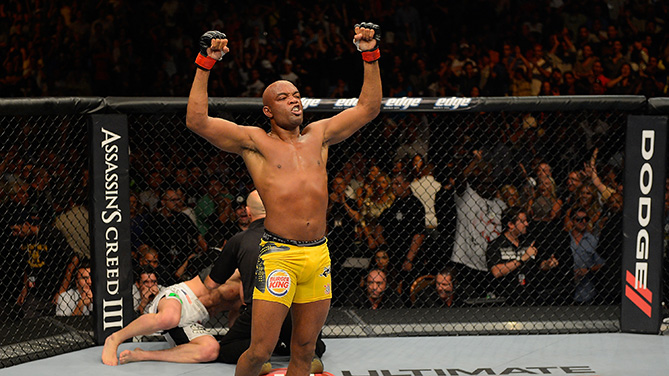 At the moment of impact – that horrific instant when bone met bone in a gruesome collision – everything suddenly stopped. A fight. A career. Perhaps even the future.

Anderson Silva lay on the Octagon canvas grimacing in pain. That was 13 months ago. Certainly, to those who witnessed it, it seemed like the end.
Silva, his left leg broken, couldn’t stand on his own two feet, but he still could have walked away. He could have retired from the UFC, his legacy intact, his imprint on the sport untouchable. Who could have blamed him?
But it would have been anticlimactic. The greatest fighter in MMA history doesn’t go out on his back. Silva’s career is poetic, lyrical; anything less than a triumphant return wouldn’t have worked.
> READ: Nick Diaz Knows What You Think About Him. He Also Knows You Cannot Turn Away
And so everything points toward Saturday night and UFC 183, his rebirth of sorts, a comeback fight against Nick Diaz at MGM Grand in Las Vegas that Silva is treating like his debut. In a way, it is.
“For me, this is my first fight in UFC,” he says. 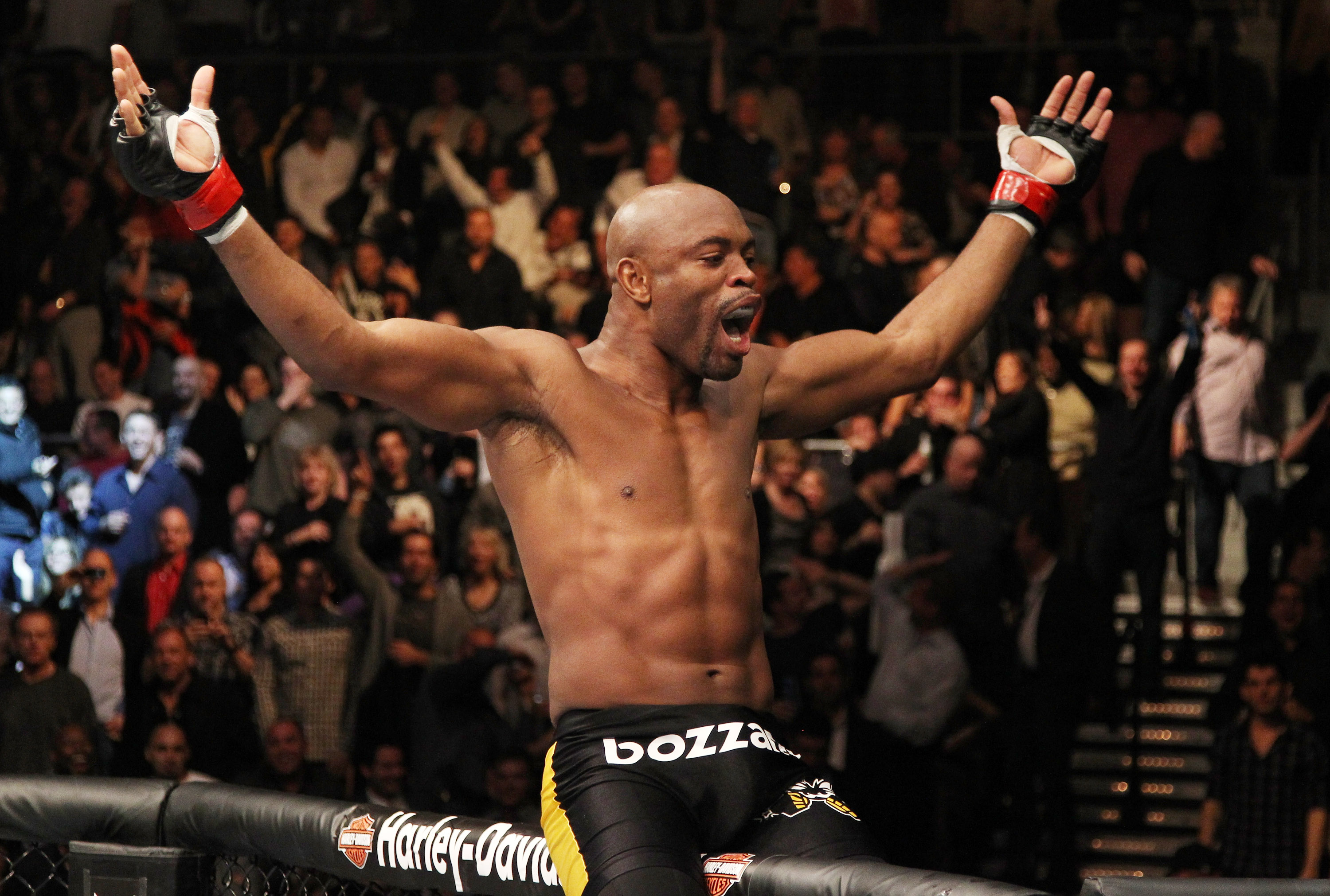 He’s starting over, or at least it feels like a new beginning. Silva is looking forward, not reliving his past – and certainly not the night his lower left leg snapped in half when it struck the kneecap of Chris Weidman at UFC 168. “I don’t talk about this anymore,” he says firmly. “I’m good. I’m very good.”
Or is he? Silva returned to training several months ago, but he discovered quickly that overcoming his fear of throwing leg kicks was not easily overcome. In fact, his concern was so great that he sought out a psychologist to help him chase away his “ghosts” – that fear that enveloped him every time he thought about throwing his leg.
“I feel no pain at all,” he said in a recent interview with the Brazilian TV news program Fantastico. “The hardest part is self-confidence, to kick again as I used to.”
-----
“In my opinion, it’s very hard to come back from that type of injury. The main effect is in your mind. Sometimes your body can recover everything, but your mind still feels the pain and has no confidence.” - Lyoto Machida
-----
Whether he has conquered his fear remains a question. He won’t know until he faces Diaz and commits to throwing a kick without worry. 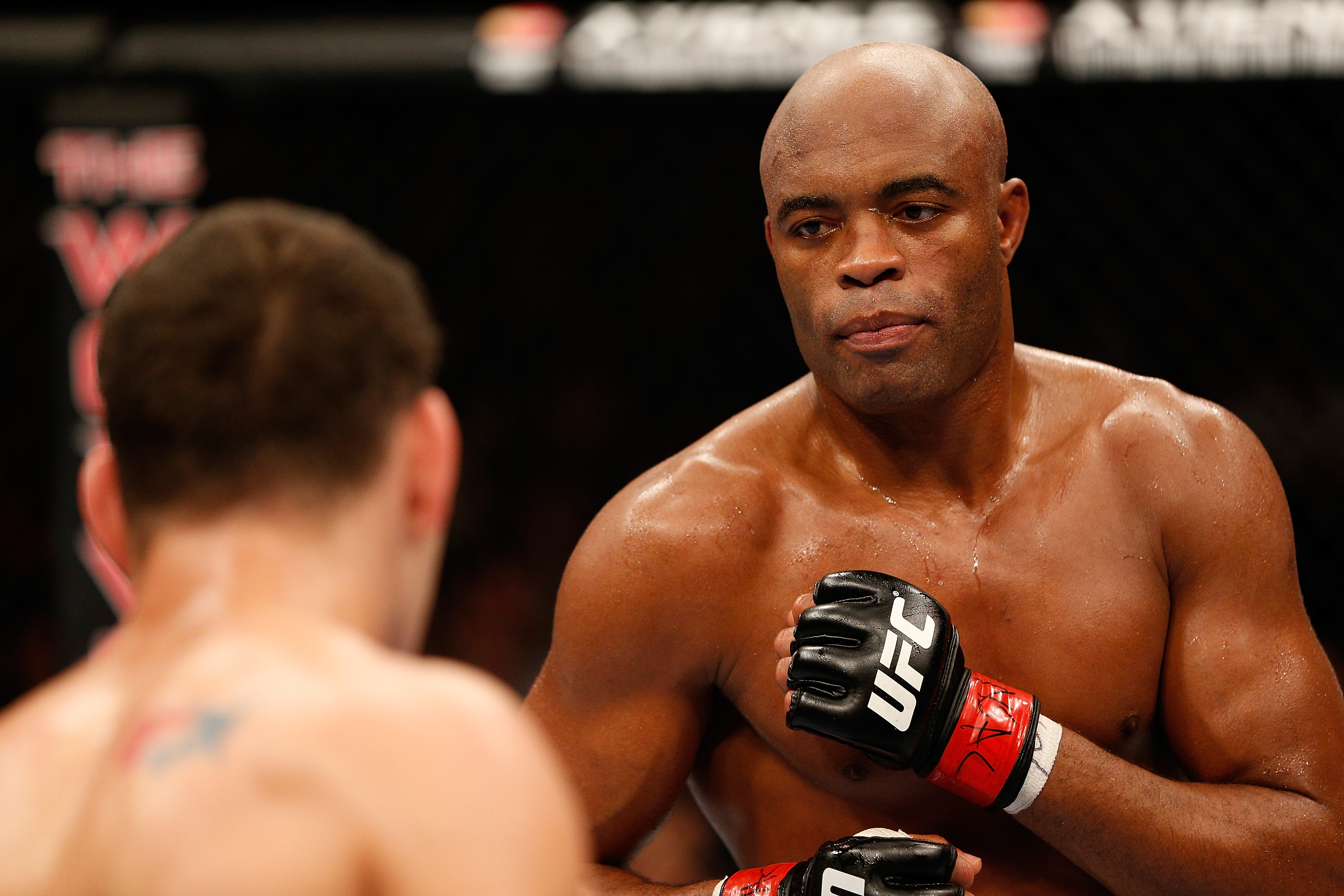 “My mind now is good,” he said last week in Torrance, California, where his Muay Thai College is headquartered. “My leg is good.”
But collective breaths will be held. Silva and Diaz are likely to engage in a stand-up fight, and Silva’s long legs have been critical to his success. Unless he can throw kicks with abandon, his comeback won’t be complete.
“In my opinion, it’s very hard to come back from that type of injury,” fellow Brazilian fighter Lyoto Machida said. “The main effect is in your mind. Sometimes your body can recover everything, but your mind still feels the pain and has no confidence. That’s the main thing.
“This fight is going to be very important to Anderson.”

Such an injury is not uncommon in sports. Thirty years ago, Washington Redskins quarterback Joe Theismann suffered a compound fracture of his leg against the New York Giants and never returned. Indiana Pacers star Paul George broke his right leg in the same manner playing for Team USA last August. His rehabilitation has been slow, although he hopes to return next season.
> WATCH: UFC 183 Extended Preview
Conquering his fear, and convincing himself that he can throw kicks without fear, will be Silva’s most significant challenge.
“There’s a mental barrier there, that concern inside your head that it could happen again,” UFC executive Marc Ratner said. “To even fight at all, you’ve got to be fearless. But overcoming an injury, you have to be mentally strong.” 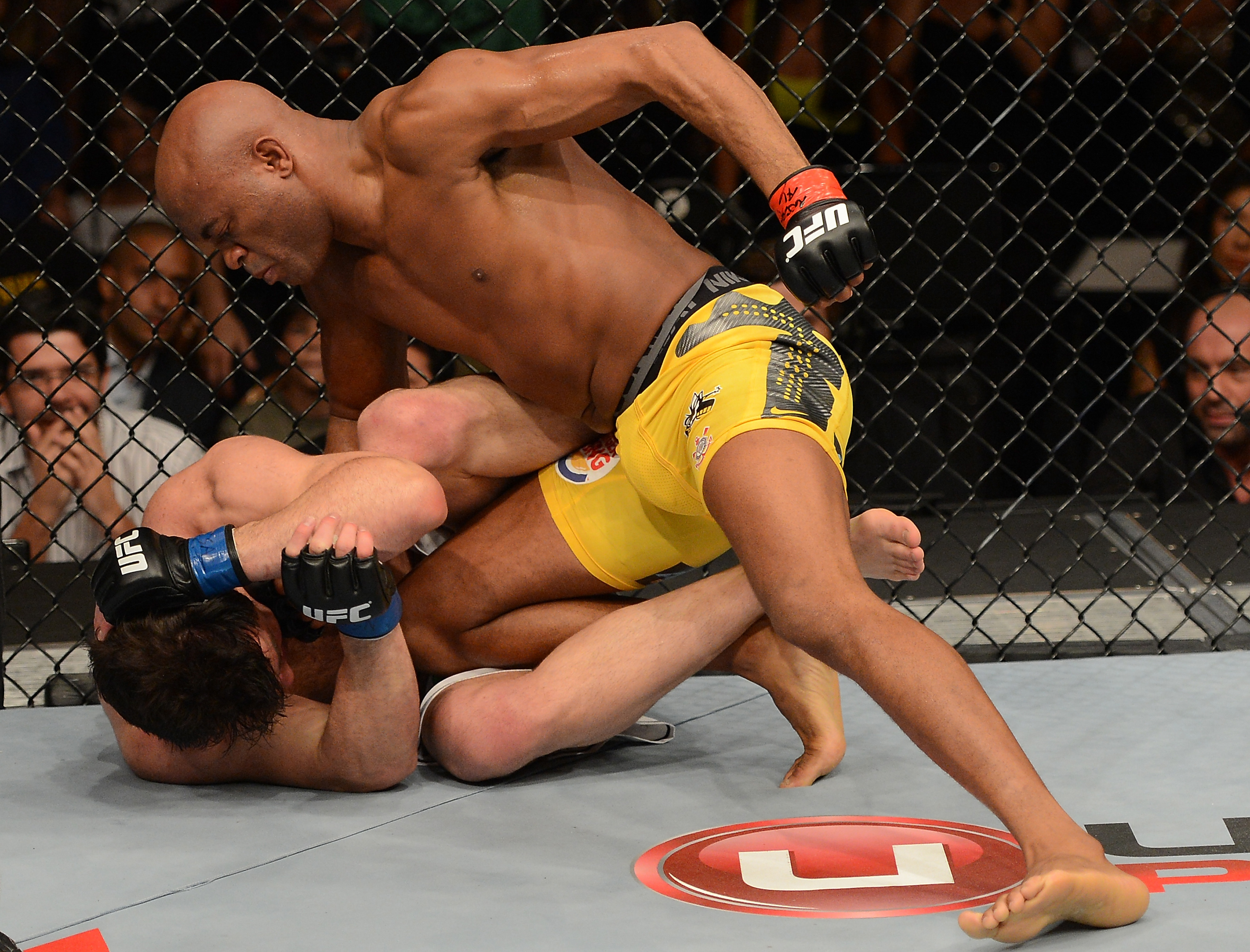 Silva clearly is. UFC President Dana White recalled Silva, while on a table to have his bones set before surgery, asking how quickly he could resume training.
Retirement never entered his mind. But Silva’s teenage son Kalyl begged him to quit following the loss to Weidman. He couldn’t see the point of his father continuing to fight.
“He said, ‘Dad, stop. I need you more. You fight for a long time. Why?’ ” Silva recalled.
“I say, ‘Because this is me, this is my life. I love to fight. I don’t fight for the money. I work hard for UFC for a long time. I have money for my family, but I fight because I love it.’ ”

Who has earned YOUR vote during the UFC Fan Showdown?

It has made him wealthy and immensely popular in Brazil, where he was recently selected No. 27 on a list of the 100 most important celebrities by Forbes Brasil. In a country dominated by soccer stars, singers and TV personalities, it’s a testament to Silva’s overwhelming popularity.
“He’s a very unique guy,” Machida said. “Brazilian fans love his style.”
-----
“It’s already cemented. But should he come back, win this fight, then reclaim the title again, it just takes him to another level. It’s another one of those great stories. If you were watching a movie of Anderson Silva’s life, it would be another part of his life that would be amazing.” – Dana White on Silva’s legacy
-----
His fights have become major events on the Brazilian calendar, and the fight against Diaz will certainly have millions tuned in. UFC Brazilian fighter Alan Nuguette recalled Silva’s first bout against Chael Sonnen at UFC 117, when Sonnen dominated for four rounds before finally losing on a submission.
Nuguette, who lived in the Brazilian city of Manaus at the time, said, “Everyone went crazy. It was like the World Cup final.” 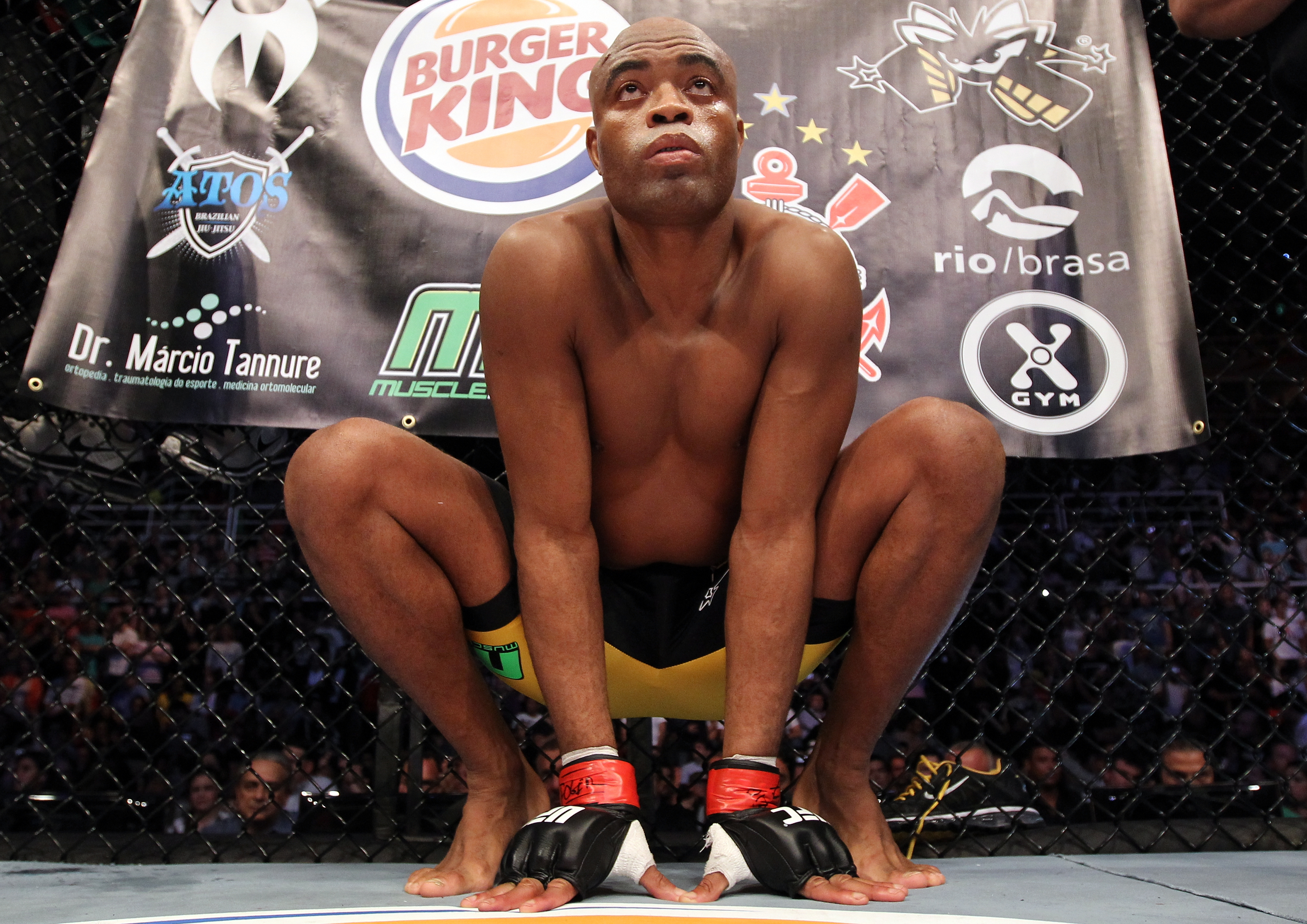 Nothing will likely threaten Silva’s popularity, although a loss to Diaz would be his third in a row following successive defeats to Weidman. If that happens, a carefully laid-out plan to fight for the middleweight title would be ruined.
But if Silva defeats Diaz and Weidman defends his belt against Vitor Belfort in UFC 184 on Feb. 28 at Staples Center in Los Angeles, a Silva-Weidman rematch would be next up.
“If he beats Diaz, you’ve got that one thing out of the way,” White said. “How did he feel? How did he look? Did he throw that leg kick? Did he feel comfortable? That would give him the confidence to decide.”

But here’s the rub: Silva, three months removed from turning 40, said he doesn’t need the belt.
In his interview with Fantastico, he said, “I’m over this thing of being champion, having the title. … In a way, you’ll see me (fight again), but not for the belt, that thing of being champion again. I don’t have the patience for this. I think I’m closer to retirement every day.”
> WATCH: UFC 183 - No Sunshine | Nick In A Cage
He may have been speaking from emotion, his mind still not in balance after his injury. Last week, he said he hopes to fight five more years. He has a 10-fight contract with UFC and eight fights to go. 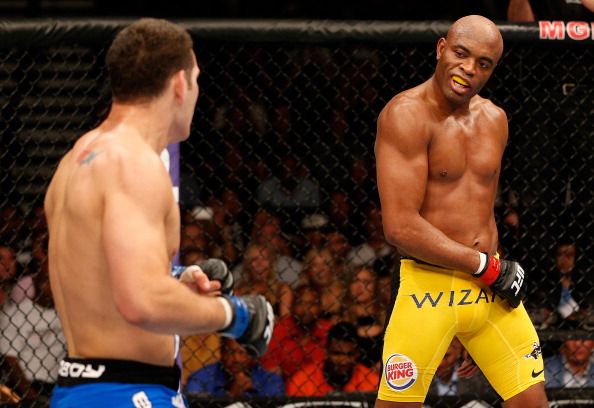 Asked last week about regaining his middleweight title, Silva said, “I don’t know. This is a good question. If Dana gives me a chance for the belt, I fight for the belt.” Despite his prolonged inactivity, he has remained the UFC’s No. 1-ranked middleweight.
So far, his preparation has been exceptional. If the layoff did anything, it may have renewed his energy and resolve. The fight is back in his eyes. He’s smiling again.
“Being around Anderson, he’s back mentally to when he first started,” said his longtime manager, Ed Soares. “He’s very happy, he’s very motivated. He’s got the right people around him. He finishes training with a smile on his face.”
But so much depends on his performance against Diaz, whom White calls “one of the meanest, nastiest opponents in the sport.” Win impressively, and Silva will undeniably signal his return.
Struggle – or worse, lose – and his future is uncertain. 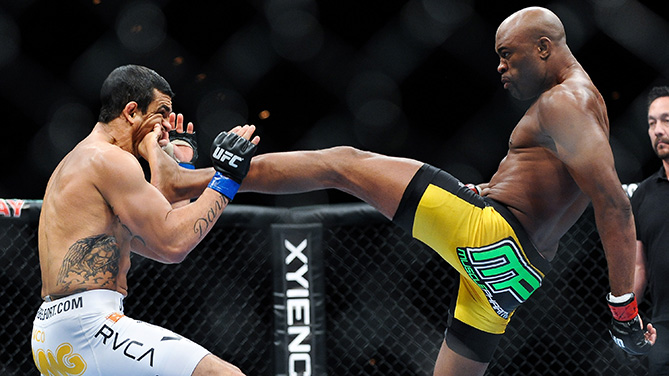 He will have to be vintage Anderson Silva – all arms and legs, always on the offensive, continually unpredictable – to convince his fans he’s back.
“Who knows what he’s going to do?” UFC analyst Joe Rogan said. “We won’t know what’s going on with Anderson until he gets in there. But I’ve seen video of him throwing the leg in training, I’ve seen him kicking the bag, I’ve seen him sparring, both supporting that leg and throwing it as a strike.”
> WATCH: UFC.com The Time Is Now Anderson Silva Interview 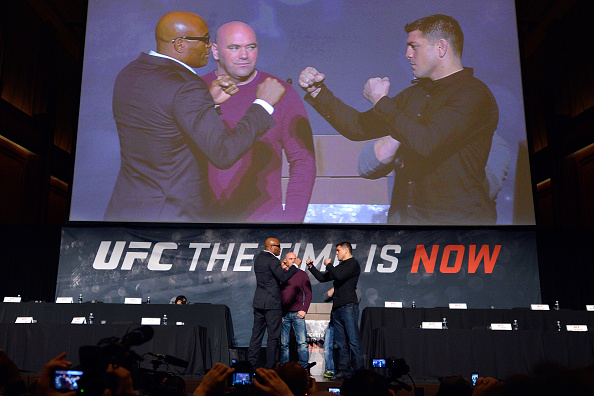 If that’s the fighter who enters the Octagon, it will mark a new day for the UFC and a new day for the Spider. But no matter what happens, his legacy won’t be affected.
“It’s already cemented,” White said. “But should he come back, win this fight, then reclaim the title again, it just takes him to another level. It’s another one of those great stories. If you were watching a movie of Anderson Silva’s life, it would be another part of his life that would be amazing.”
Better than a proud, confident fighter writhing in pain and unable to get up. Even Silva can acknowledge that much.
“For my career, it’s the best,” he said. “Anderson is back and gets the belt back. Perfect.”