Anderson Silva, the fighter and the celebrity

As an athlete, actor and dancer, "The Spider" is a star inside and outside of the Octagon

Before MMA fighters shared the spotlight with famous actors or were followed by paparazzi on the streets, there was Anderson Silva. The former UFC middleweight champion fascinated casual viewers of the sport with his extraordinary performances in the Octagon, and became one of the sport's first crossover stars – a celebrity in and out of the cage.

Silva’s star power is so huge in Brazil that the fighter is constantly compared to Ayrton Senna and Pelé, the country's two biggest sport's idols. In 2011, Silva himself revealed that he was amazed with the new legions of fans.

"Before, the people who stopped me on the streets were from the fighting community. Now, I get love from women, children, older people, people that have no connections to the sport. This is really cool. I am really happy", he told Veja magazine.

And that was just the beginning.

A fighter and a celebrity

Silva’s first notable appearance in a non-sports related TV show in Brazil happened in 2010, when he went to Globo's Sunday traditional Domingão do Faustão program to talk about his controversial fight against Demian Maia. After The Spider's heroic win over Chael Sonnen, though, he became a staple in the Brazilian free/open TV.

As he became a constant presence on Brazilian TV, Silva consolidated himself as an idol. Naturally, the next step was starring in publicity pieces, and The Spider became the poster boy for several companies.

This is when Silva started showing versatility. The Brazilian played the part of the tough fighter, like when he faced-off Rodrigo Nogueira to see who would get the last motorbike available in the store. But Silva also displayed a lighter side by making fun of his distinctive high-pitched voice when lip-syncing "Loving You" by Minnie Riperton, to declare his love for a fast food chain burger.

Months before the 2014 World Cup in Brazil, a mobile phone company promoted the meeting between Silva and Pelé - a true stamp of approval of the fighter's celebrity status in the country. He also starred in advertising for beer, cars and insurance companies. 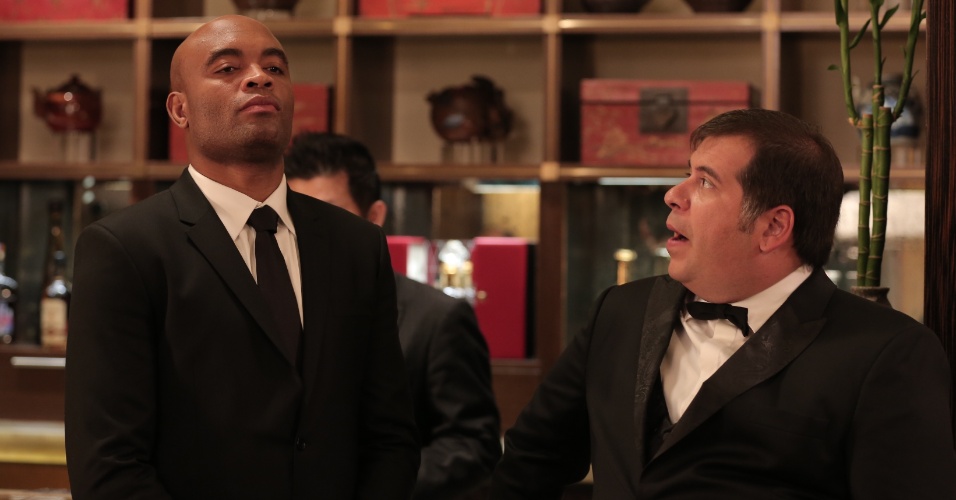 On the big screen

Silva was one of the first MMA athletes to embark on an acting career. Besides his appearances in publicity pieces, he made an appearance in the 2013 Brazilian movie Até que a Sorte nos Separe 2, where he played the part of Andrew Silver, a cop that looks just like – you guessed it – Anderson Silva.

The Spider also starred in Tapped Out (2014), alongside Lyoto Machida. But Silva’s most famous appearance on the silver screen is the documentary Like Water (2011), which chronicled his training before his first fight against Chael Sonnen.

Breathe easy, for it's not because of his well-known voice pitch that has seen Silva also become involved with the Brazilian music scene. Even though he once showed his singing talent in a TV show, Brazilians remember when he participated on a music video of famous MPB singer, Marisa Monte.

On her official website, Monte said that she was looking for a dancing partner to star in her music video for Ainda Bem, but she did not want a professional dancer. That's how Silva’s name - fresh from a win over Yushin Okami on the first UFC Rio card - popped up.

"I invited Anderson because I knew he could dance. I've seen him dancing like Michael Jackson before fights, so I knew he could be a good partner,” Monte said. “I had to shoot the video, but I wasn't sure if he would do it. Happily he said yes. We didn't have a choreography, and we did not rehearse.”

Silva was on the cover of several magazines of large Brazilian distribution that didn't really give much – or any – attention to MMA before The Spider phenomenon. In 2010, he became Michael Jackson for a double cover of Rolling Stone magazine. In 2014, he recreated the iconic Muhammad Ali as St. Sebastian for Trip. He was defined as the "calm gladiator" in Veja, and was an editorial model for GQ Brasil.

In 2012, Anderson released two books: The MMA Bible, in which he details fighting techniques, and The Life Story of a Champion on the rinks in life, a first person biography.

In the company of big celebrities

Silva was the first athlete to sign a contract with 9ine, a sports marketing and advertising agency that has former footballer Ronaldo Nazário as a partner. The contract ensured Ronaldo's presence at Silva’s fights, and has yielded memorable moments such as the sparring session between the former soccer star and the fighter at the UFC 148 open workouts in 2012.

In June of 2011, when Justin Bieber first toured in Brazil, Silva was the singer's special guest and danced onstage in a concert at Engenhão soccer stadium in Rio de Janeiro.

Even though he was suspended by the UFC for an anti-doping violation, Silva has not been forgotten by fans. Last December, Google announced Anderson as the most searched athlete of 2015 in Brazil, followed by UFC stars Ronda Rousey, Holly Holm and Vitor Belfort.

Silva’s professional and commercial success boosted the profile of UFC worldwide and, consequently, other Brazilian athletes who also began to appear in major media programs. The pinnacle of Silva’s national idol status occurred when the rematch with Chael Sonnen was scheduled. Silva took the role of defender of Brazil, the one in charge of teaching a lesson to the loudmouth who tirelessly offended the country and its people.

The Spider even campaigned for the fight to be in Brazil, and when that failed to happen he drew an enormous crowd to Las Vegas for the UFC 148 event, in which he avenged all Brazilians within two rounds.

The fighter's reign as the UFC middleweight champion ended in 2013, but even without the belt, Anderson remains among the most revered Brazilian idols in the sport. For fans of MMA, the hardcore and the casual, it is easy to understand the anticipation for the return of one of the best of all time in the Octagon.