THE SERIES WILL BE FILMED IN LAS VEGAS IN EARLY 2015 AND WILL STREAM ON UFCFIGHTPASS.COM 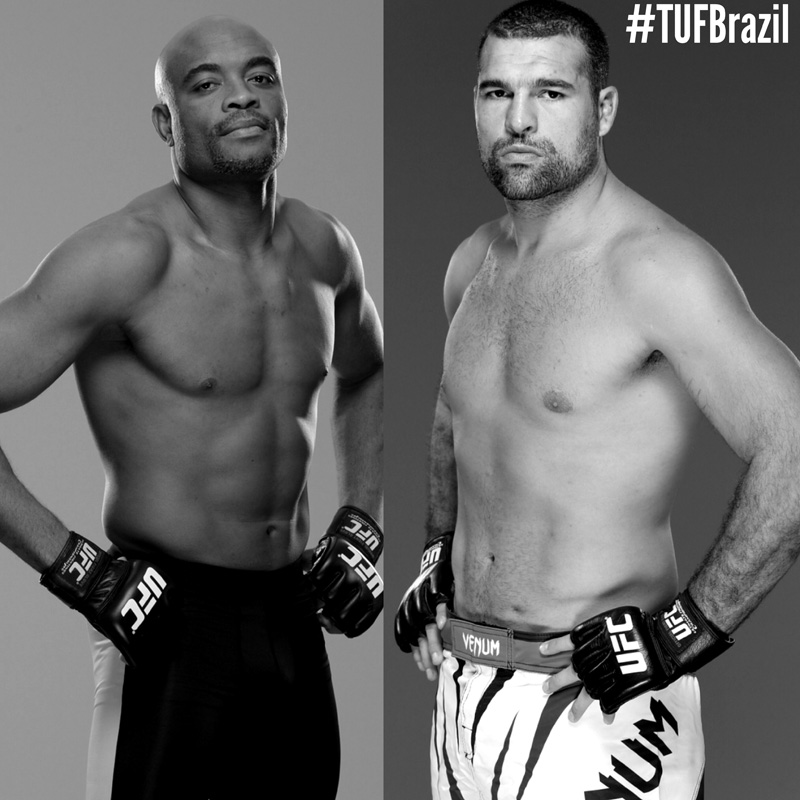 Sao Paulo – Two of the greatest Brazilian fighters of all time will lead the search for the next generation of Brazilian mixed martial artists, as the UFC® and Globo announce that Anderson Silva and “Shogun” Rua will coach the fourth season of The Ultimate Fighter&reg; Brazil.

The legendary icon Silva (33-6 in professional MMA, fighting out of Curitiba, Brazil), the longest-reigning and most successful UFC champion of all time, will coach the UFC’s flagship reality competition series for the first time. He will coach against a team lead by “Shogun” Rua (22-9, also fighting out of Curitiba, Brazil), the highly decorated striker and UFC light heavyweight champion. In this season’s format, the two coaches will not fight each other at the conclusion of the series.

UFC President Dana White said: “A lot of people were worried we’d never see Anderson Silva back in the UFC. But, not only is he back in the Octagon on January 31 at UFC 183, he’s coaching TUF for the very first time. Anderson Silva is as committed to the UFC and the sport of mixed martial arts than he’s ever been, and I cannot wait to see one of the greatest of all time pass his knowledge on to a new generation of Brazilian fighters.

“And if there’s any Brazilian fighter who can go up against Anderson as a coach, it’s Shogun. Shogun Rua has done everything in the sport and if he trains his team to fight in the same attacking style he’s always used, Anderson’s team is in for one hell of a season.”

After three hugely successful seasons filmed in Brazil, the action will now shift to Las Vegas, as the 16 finalists will be flown to live, train and compete in the fight capital of the world early in the New Year. The reality show will continue under the creative direction of legendary Brazilian TV producer Boninho, who promises the change of location will be one of many exciting innovations for the fourth season.

“Once again, The Ultimate Fighter Brazil was designed and developed by the great partnership between Globo and the UFC," Boninho said. "We’ve come up with some great concepts for this new season and supervised the creative execution of what I know will be another hit season.”

Silva added: "I think I can offer this next generation of Brazilian talent real insight into what it takes to succeed in the UFC.  I will bring everything I know about the martial arts, and my own values of what it means to be a martial artist, to my team."

Rua said: "To coach on The Ultimate Fighter Brazil is a dream come true, and an opportunity I wanted for a long time. To have my team compete against a team coached by a legend and former training partner like Anderson Silva makes it even better! Me and Anderson go a long way, training together back when we were both aiming to be stars, and to do this with him now on the biggest platform and having a chance to show people what MMA is really about is just amazing! I look forward to finding great talent and helping them become winners!"

The fourth season of The Ultimate Fighter Brazil will be available outside of Brazil on UFCFIGHTPASS.COM, the UFC’s digital streaming service, beginning in April 2015.

For more show information, bios, videos and photos, visit www.ufc.com/tuf/ and don’t forget to follow us on Twitter @UltimateFighter or on Facebook.com/TUF.

About the Ultimate Fighting Championship®
Owned and operated by Zuffa, LLC, the Ultimate Fighting Championship (UFC®) is the premier mixed martial arts (MMA) organization and largest pay-per-view event provider in the world. Headquartered in Las Vegas with offices in London, Toronto, Singapore and Sao Paulo, UFC produces more than 40 live events annually that consistently sell out some of the most prestigious arenas around the globe. UFC programming is broadcast in 129 countries and territories to nearly 800 million TV households worldwide in 28 different languages. The UFC has a multi-year broadcast agreement with FOX in the U.S., which annually includes four live events broadcast on the FOX network, as well as The Ultimate Fighter® reality television show and thousands of hours of programming on FOX Sports 1 and FOX Sports 2. In 2014, UFC launched UFC FIGHT PASS™, a digital subscription service with exclusive live events, thousands of fights on-demand and original content. The UFC organization also licenses over 100 UFC GYM® locations, and owns UFC.TV® (offering live event broadcasts and video on-demand around the world), UFC FIT® (an in-home fitness and nutrition program), UFC Magazine, and has a videogame franchise with EA SPORTS, UFC Fight Club®, UFC Fan Expo®, UFC branded apparel, DVDs and Blu-rays and Topps Trading Cards. For more information, visit UFC.com and follow UFC at Facebook.com/UFC, Twitter and Instagram: @UFC.