Anderson Silva and His Toughest Opponent

"I’m not concerned about what my opponents do. I want to better myself and I want to overcome anything that I have to." - Anderson Silva 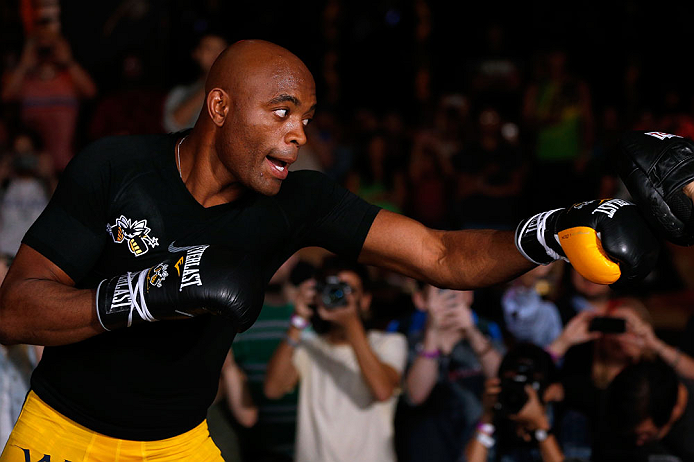 These are the days you talk about legacy when it comes to Anderson Silva. For years, he was just a terror, the unbeatable force who showed up on fight night and wrecked whoever was placed in front of him. Or as former middleweight champion Rich Franklin (the man Silva beat for the UFC middleweight crown in 2006) told me recently, “Anderson doesn't just win, he makes good fighters look bad.”

That’s a gift. Not one handed over at birth, but one developed over decades of practice, sweat, and hard times. For Silva, it’s one he’s been working on since the age of eight, and 30 years later, he’s cemented his place as not only the best mixed martial artist in the world today, but perhaps the greatest ever.

That’s some legacy to have, regardless of whether he can turn back the challenge of unbeaten Chris Weidman or not this Saturday night in the main event of UFC 162. And for Silva, this weekend – or any other weekend for that matter – isn’t about his opponent. It’s about him.

“Every new fight is a new challenge and it’s really going to be up to whoever is better prepared and whoever feels better that night,” said Silva on a recent media teleconference. “You know, win or lose, a loss and a win are always walking side by side. But I’ve been doing this since I was eight years old and there are always new challenges, there are always new things. And my biggest concern is going out there and doing better for myself. I’m not concerned about what my opponents do. I want to better myself and I want to overcome anything that I have to.”

There hasn’t been much for Silva to overcome in the UFC outside of some rough goes with Chael Sonnen in his last two middleweight title fights, both of which he ended up finishing anyway. Sure, there has been tough opposition in the form of Franklin, Sonnen, Dan Henderson, Chris Leben, Forrest Griffin, Stephan Bonnar, Demian Maia, Yushin Okami, and Vitor Belfort, but being considered the best ever means that you make winning look easy. For some, that would be a curse, but in MMA, Silva has no shortage of supporters giving him his just due.

In response, “The Spider” sits back and humbly accepts the praise while never talking about himself in such a lofty manner. In fact, when asked on the UFC 162 teleconference who the top five mixed martial artists of all-time were, he didn’t even make the top four, citing BJ Penn, Randy Couture, Chuck Liddell, and Royce Gracie.

Yet the beauty of Silva may lie in the fact that as respectful as he is outside the Octagon, when in it, he becomes mean, almost disdainful of his opposition. And as soon as he feels like he has your number, then it can get ugly for those challenging him. No one knows this better than the man tasked with coming up for a game plan to beat Silva, Weidman coach Ray Longo.

“The masterminding of the strategy isn’t going to be a technical thing,” he said. “It’s going to be more of controlling the rhythm and mindset. If you let him (Silva) get into a groove, he’s very, very good. In a way, Anderson is a bully. Once he figures you out, then he’s dancing around and that’s a bad rhythm to let that guy get into. It’s dangerous. So we understand what we’re up against. It’s like Mike Tyson. When Mike was coming up, they were losing that fight before they got in the ring. Stephan Bonnar’s a great guy and he’s been around, but his shoulders were hunched up and he was nervous as hell in their fight.”

Bonnar only lasted four minutes and 40 seconds in their October 2012 bout, Silva’s most recent victory. He is expected to get a much sterner challenge from Weidman, whose wrestling is seen as the key for him to scoring the upset, especially after seeing Sonnen’s relative ease in taking Silva down and controlling the Brazilian for the majority of their two fights. Even a veritable army of UFC stars went on the record picking Weidman to win, key among them UFC welterweight champion Georges St-Pierre, but if Silva’s bothered by this apparent belief that he is due for a fall, he’s not showing it.

“Imagine if I were to start listening to everything that people say,” he said. “St-Pierre had his chance to pronounce himself about fighting me and he didn’t do it so that’s what he chose to say and that’s fine. But I’m not paying attention to what everyone else is saying.”

Selfish? You could say that, but it wouldn’t be entirely accurate. What makes the great ones great is that one-track mind, that idea that nothing else or no one else’s opinion matters when it comes to their craft. And as gracious as he is when the gloves are off, when they’re on, Silva’s only priority is the man in the mirror. When that changes, when he’s worried about what his opponent brings to a fight or starts focusing more on game planning for what ifs than preparing for what is, that will likely be what beats Silva. Not age, not apathy, not a rising star with an impressive tool kit. But himself.

Will Saturday be that night? If we’re judging by his demeanor at Thursday’s final press conference, it doesn’t seem like it.

“It’s normal,” said Silva of the fight. “Just another day for working.”