Despite having only been in mixed martial arts for nearly six years, Megan Anderson has been viewed as a contender since day one, and she has learned to tune out all the noise around her fights.
By E. Spencer Kyte • Dec. 24, 2018

Megan Anderson is really looking forward to getting into a fistfight this weekend.

For the third time in four years, the Australian featherweight has spent the holiday season getting ready to step into the cage and, after a long training camp, she’s counting down the minutes until she can make that walk. 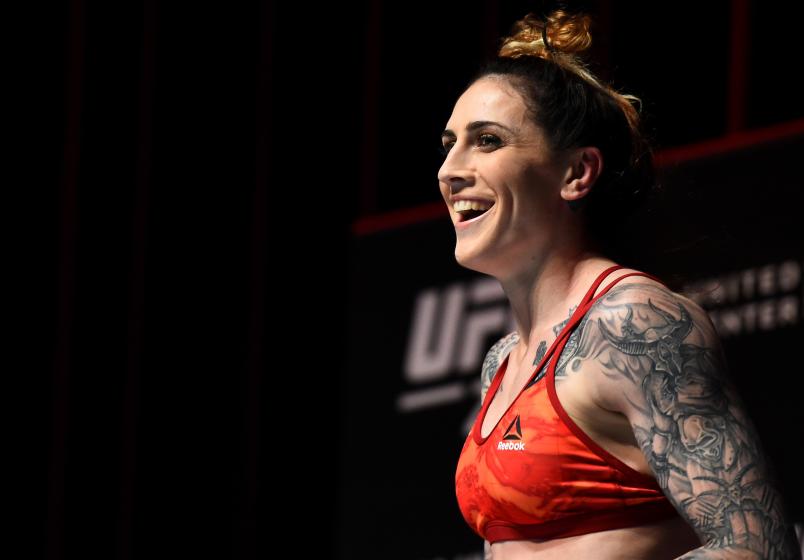 “Out of the last four Christmases, this is the third one that I’ve missed because in Invicta, two of my fights were in early January, so I’m used to it and it’s not that big of a deal.”

In addition to the simple joy of competing and the payoff to putting in long hours in the gym for the last few months, part of what has Anderson champing at the bit is the chance to log two fights in the same year for the first time since 2016, when she competed three times en route to claiming the Invicta FC interim featherweight title in her last post-Christmas appearance against Charmaine Tweet at the start of 2017.

That victory pushed the 28-year-old’s winning streak to four and established her as one of the top featherweights in the world. A move to the UFC and a showdown with former Invicta FC champ Cris Cyborg seemed obvious and imminent and was briefly expected to take place at UFC 214.

But Anderson was forced to withdraw from the contest and her stay on the sidelines continued. 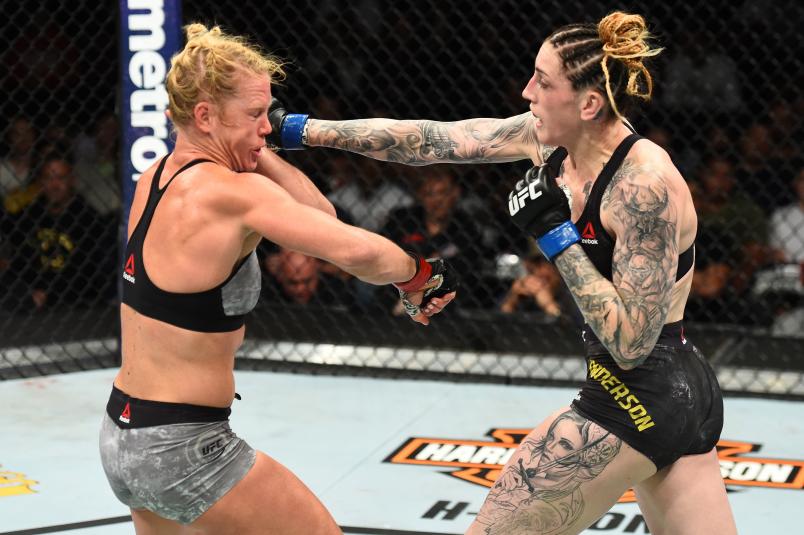 This past June, she finally made her first trip into the Octagon, squaring off with former bantamweight champ Holly Holm at UFC 225 in Chicago. Though the fight didn’t go her way, Anderson still came away from the experience feeling pleased, happy that her lengthy hiatus was finally over and she could get back to being an active fighter once again.

“A lot of that for us was getting to fight; that was big for us just because I hadn’t been able to fight for a long time and had a lot of issues,” explained Anderson, who landed on the wrong side of a unanimous decision verdict, dropping her record to 8-3 overall. “Just fighting was amazing for us and being able to get back in there and be active again (was huge). Now I feel like I definitely showed I belong in the UFC and being able to fight on that stage, we were really happy as well.

“(Not having) fought in a long time, having a long layoff, fighting in a big promotion didn’t really affect me at all,” she continued. “I think Holly just had a really good game plan. We weren’t really expecting for her to take that route, but this is MMA and that’s what happens. She was the better fighter on that night.”

Because of her rapid rise to being a main eventer and ultimately a champion under the Invicta FC banner and being talked about as a title contender before ever setting foot in the Octagon, people tend to forget — or ignore — that Anderson has only been competing professionally for a little over five years.

Fighters generally don’t ascend to the highest levels in the sport in such a short amount of time, let alone find themselves in the thick of the title chase while making that expedited journey from the regional circuit to the biggest stage in the sport, but that’s exactly what Anderson did.

“I think people do forget that this coming May, I will only have been doing MMA for six years,” she said. “I think that’s a testament to how hard I have worked and the fact that I am fighting at this level after only doing this for a very short amount of time.

“I feel like I get unnecessary criticism and hate because of that. I feel like I get a lot of criticism and hate that a lot of other fighters don’t get because I am talked about a lot and I am put in the spotlight a lot, but I’m just doing what I’m doing,” continued Anderson, who now resides in Missouri, where she trains under the watchful eye of UFC welterweight James Krause. “I’m fighting each fight. I’m trying to be the best fighter I can. If I win, I win and if I lose, I lose, but I can tell you for sure that we aim to finish every single fight.”

Catching heat for simply taking advantages of the opportunities in front of you and chasing your dreams can be a difficult thing to wrap your head around, but Anderson has learned to tune out the noise.

“I used to (feel a lot of pressure), but I don’t really anymore,” she admitted. “I think getting so much negative criticism and stuff like that, I’ve become desensitized in a way to all of that s***. I’m my own worst critic — I put more pressure on myself than anybody else will, so nobody is going to compare to what I expect of myself.” 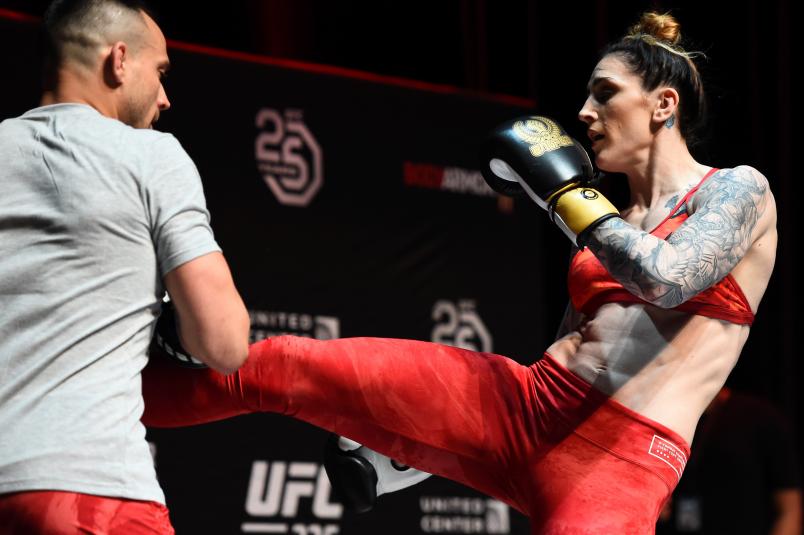 What she expects this weekend is for Zingano to be her aggressive self, which in turn should allow Anderson to showcase the powerful striking and finishing instincts that helped her take the fast lane to the top of the Invicta FC featherweight division and waltz into the UFC as a readymade contender.

“I think this is a great fight for me,” she said of the pairing with Zingano. “Cat isn’t going to be scared to fight me. She’s going to pressure, she’s going to come forward; she does that in every single one of her fights. I’m excited to fight someone who is going to bring it.”

As for the pressure of picking up her first UFC victory and silencing those ever-present critics, Anderson isn’t worried about any of it.

All she wants to do is get back to work and finally punch someone in the face this weekend.

“I don’t really think about that stuff. I think hard work always pays off and it’s been a long fight camp. I just want to fight. I’m just ready to go.”