These days, the former University of Alabama linebacker is a lot more kicking and punching in an air-conditioned gym than doing two a days in the dog days of summer.

“My oldest son plays and I go out there and watch his practice, and I just remember that heat and that sun and how much I appreciated the air-conditioned gym,” laughs Anders, who hasn’t slacked off athletically. He’s just changed his field of play, and he is enjoying being a star on the rise in the UFC’s middleweight division.

This Saturday, the 31-year-old will face Tim Williams in his first bout since a controversial decision loss to former light heavyweight champion Lyoto Machida. It was seen as a big step up for the then-10-0 Anders, but he not only acquitted himself well, but fought a 25-minute fight many believe he deserved to win. 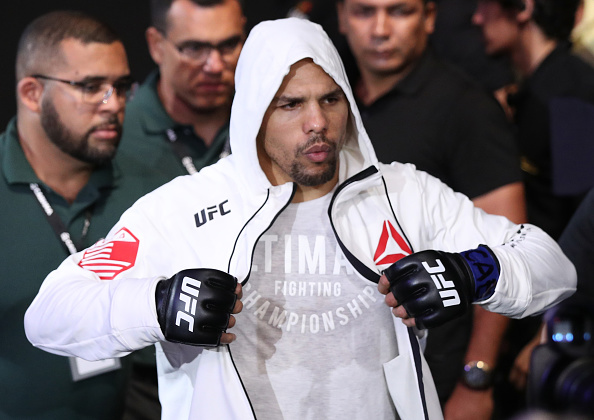 “I just take it as a learning experience,” he said of the split decision defeat. “Now I see how the judges look at the fight. During the fight, I obviously landed the much bigger shots, got takedowns and did more damage. And he just kind of put together leg kicks. He’d kick my leg and I wouldn’t think nothing of it because I didn’t feel like it was doing any damage or really doing anything to affect the fight at all, but if you look at the significant strikes, he outpointed me and it’s all because of leg kicks.”

Despite the “1” in his loss column, Anders made a lot of fans that night in Brazil, as he was poised in battle, went five rounds with a former champion, and handled being a headliner like a seasoned pro. In other words, he proved ready for prime time, which wasn’t a surprise to him.

“I already knew I belonged,” Anders said. “I’m not quite there, but I’m on the way. And I don’t really believe in moral victories. I feel like I could have done more. I finished the fight and I wasn’t even breathing hard, so that’s an error on my part. If a fight goes to a decision, you should be dog-tired from trying to do damage and finish the fight. It’s on me that I didn’t win the fight.”

Yes, Anders is 31, but he’s young in MMA years, having just turned pro in 2015. So to hear such maturity out of someone who hasn’t been doing this as long as most in the promotion is refreshing, but not surprising, given his character outside the Octagon, where he regularly donates his time visiting children at places like the Ronald McDonald House.

“Everybody has a certain set of circumstances they’re born under or have to go through in life, and everybody’s a little bit different,” he said. “And some people, they just need somebody to make them smile. If I can do that, make somebody happy or talk to somebody and do stuff like that, I will. The kids really tug on my heartstrings, so I think it’s awesome to be able to have a platform where someone even cares to meet me. And those kids are resilient. They’re really tough. They live as normal a life as possible and they’re up running around, laughing just like any kid. I bring my kids and they always have a great time.”

Throw in Anders’ time at the top of the game in college football, and you’ve got someone who has more experience than a 10-1 MMA record shows. Yet as Anders points out, when it comes time to perform, life on the gridiron and in the Octagon are two different things.

“The thing about football is, you win or lose individual battles,” he said. “Each play has a history of its own. That’s not really the case with striking exchanges and grappling exchanges. One punch could end the fight; one wrong move on the ground, and now he’s got you. Even if you throw an interception, you get to get back up the next time the offense is out on the field. You make mistakes in a fight, it’s gonna end with you asking, ‘Did I win?’”

You get the impression that Anders likes that all or nothing proposition on fight night, and thus far he’s excelled at it. So much so that when it was announced that he was fighting the talented but unheralded Williams this weekend as opposed to a top 15 middleweight, some eyebrows were raised. Anders wasn’t among the surprised, though.

“Not really,” he said. “A lot of the middleweights have recently fought or are fighting and I’m coming off elbow surgery, so I think it’s a timing thing. The November 3rd card at Madison Square Garden has a lot of middleweights, and Sao Paulo is looking to be the same thing. So Tim was available and I was available.”

Now they’re gonna fight, and whatever happens happens, another nod to a fighter who has his priorities straightened out.

“I think in all sports, but especially in combat sports, there’s a lot of ego involved,” Anders said. “Guys don’t want to admit that somebody else got the better of them. But at the end of the day, this is just a competition. You signed up, I signed up, we’re gonna fight under these rules at this place at this time. There’s only two of us, so somebody’s gotta win and somebody’s gotta lose. And if you come up on the wrong end, it’s okay. You get up, lick your wounds and keep it moving.”