Anders' Full Athletic Potential To Be On Display In Atlanta

Eryk Anders hasn’t had the easiest path since making his UFC debut on short notice against Rafael Natal in July 2017. From fighting without a full training camp to facing a former world champion, from battling a future title challenger in the knockout artist’s backyard to basically learning on the job at the highest level of the sport, it’s basically been a case of Anders having to fight killers night in and night out.

But he’s not complaining.

“I don’t think it’s difficult to be in this situation because I’m a killer myself,” Anders said. “I came up short in a few of these last few fights and that’s just the nature of this business. It’s a one-on-one sport, there’s a winner, there’s a loser, so it is what it is. I just go out there and do what I do and sometimes you win, sometimes you lose, but losing’s never fatal, so you get back in there and try it again.”

Now 3-3 in the Octagon following a split decision loss to Elias Theodorou in December, Anders will be back in action this Saturday in Atlanta, making his second UFC appearance at light heavyweight against Khalil Rountree Jr. He won’t say if it’s a permanent move to 205 pounds, opting instead to take each fight as it comes at whatever weight is available. 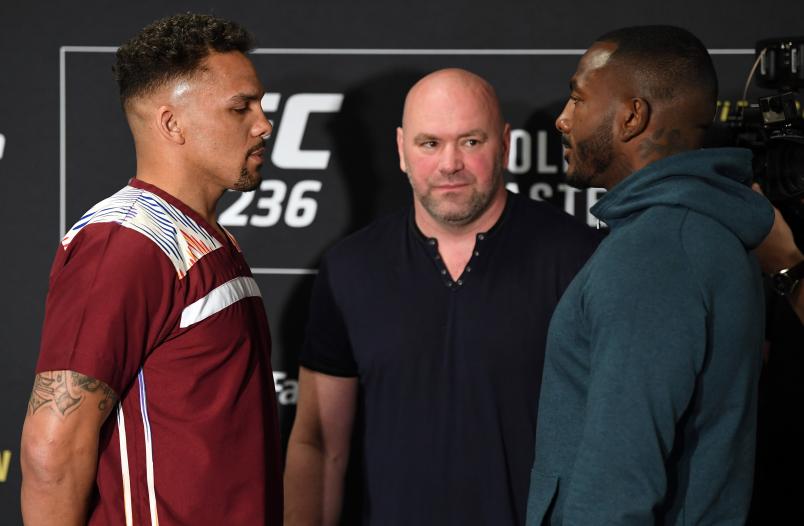 In his last visit to 205 pounds last September, it was another short-notice assignment as he stepped in for the injured Jimi Manuwa to face Thiago Santos in Sao Paulo. Anders would get stopped for the first time in his career by “Marreta,” but he picked up Fight of the Night honors in the process, basically telling the story of a year that saw him go 1-3 but with a couple asterisks attached, thanks to the short-notice loss to Santos and a couple split decisions defeats to Theodorou and Lyoto Machida that could have gone his way.

“I’m not one for moral victories,” he said. “Every time I step inside the cage, I’m looking to get a win. But with that being said, just one or two game plan changes and I win those two decision losses and I definitely feel like I could have finished both those guys. Santos, it was a no risk no reward kind of thing, but I put up more of a fight than the last two guys that he’s fought, so there’s a silver lining in that situation. But I think 2019 is gonna be a little bit different. I’ve changed some strategic things, some coaching points and I think for the first time in my fighting career I’m gonna utilize my full athletic potential as well as show off a newly developed skill set. So I’m excited for April 13th and I’m chomping at the bit to get there.”

As far as those changes go, Anders has supplemented his training in Alabama with longtime coach Chris Connolly by traveling to Colorado to work with Marc Montoya and the Factory X squad. The 31-year-old has been pleased by the results.

“I just needed a change,” he said. “They’ve got great training partners, Marc Montoya’s record speaks for itself and I think the two guys I’ve got in my corner are the best in the business at creating game plans and implementing them. So I think with these two guys in my corner, it puts me in the best possible situation to win.”

Working with the likes of Ian Heinisch, Chris Camozzi and Dustin Jacoby hasn’t hurt, either, and when Anders adds that grind to Montoya’s adjustments to his fighting approach, it’s no surprise that Anders can’t wait to get to work this weekdn.

“I don’t think there’s ever anything wrong with the mental side of my game, but we made a few philosophical changes, like I don’t have to go out there and try to knock their head off with every punch,” he said. “Just go out there, pepper them up. I also think he (Montoya) is doing a good job of helping me utilize my athletic ability to the fullest. So it’s been good all around and I see myself improving every day.”

In Atlanta, he gets to show what he’s learned by facing another killer in Rountree. And though he’s getting a late start after fighting four times each in 2017 and 2017, Anders is planning on making 2019 his best year yet.

“I think my road’s gonna be a little bit longer because I’m bouncing around two or three different weight classes, but by the end of 2019, I’d like to at least be ranked in two weight classes,” he said. “Of course, the end game is always the belt, and it don’t matter what weight class. I think the vast majority of fighters feel that way. However, I feel that only a few are able to have the chance to obtain that. I think I’m one of those guys, so 2019, let’s get ranked in both divisions and 2020, let’s go after the belt.”