MISS THE FIGHTS? WANT TO SEE THEM AGAIN? STREAM THEM ON UFC FIGHT PASS RIGHT NOW!

After spectacular finishes in his first two UFC victories, featherweight prospect Makwan Amirkhani showed off his wrestling game in his third trip to the Octagon on Saturday, winning a three-round unanimous decision over Mike Wilkinson in a UFC Fight Night prelim bout at the O2 Arena in London, England.

Amirkhani got a quick takedown to start the fight and he moved even quicker into side control. He eventually settled into Wilkinson’s guard in an attempt to fire off some strikes, and with 1:45 left, he briefly achieved the mount position. Wilkinson’s defense was solid, but not good enough for him to get back to his feet. The bloodied Wilkinson did briefly see some light with an arm lock, but Amirkhani wasn’t in any serious trouble.

Wilkinson was able to repel Amirkhani’s first takedown attempt in round two, but wasn’t able to stop the second on, with the Turku product proceeding to have the same success he had in the previous round. Suddenly, Wilkinson attempted a guillotine choke and almost pulled off the finish, but Amirkhani was able to free himself after a few dicey moments. In response, Amirkhani got into the mount with 90 seconds left in the frame, Wilkinson eventually getting himself out of immediate danger and staying out of trouble until round’s end.

Looking to turn things around in the third, Wilkinson pushed the pace and was able to put Amirkhani on the defensive briefly with his ground strikes, but Amirkhani held his foe off and got to the mount position once more, allowing him to finish the bout in control

With the win, Turku, Finland’s Amirkhani improves to 13-2; Leigh, England’s Wilkinson falls to 9-2.

A hard-fought battle between bantamweights Davey Grant and Marlon Vera featured some even fiercer exchanges between Vera and referee Marc Goddard before the unanimous decision for Grant was rendered.

Grant had success with his striking as the fight began, prompting Vera to hit the deck in search of a leg lock, but when he grabbed the inside of Grant’s glove, he was admonished by referee Marc Goddard, who restarted the action. In an ensuing scramble, Vera was able to get the now bloodied Grant down and take his back, yet the Brit was cool under pressure as he worked his way into Vera’s guard, where a series of ground strikes followed until the end of the round.

Grant’s striking allowed him to dominate the opening two minutes of round two, Vera pulling guard in response. Grant continued to control matters with his striking on the ground. Again, Vera looked for a submission, but a glove grab produced another stern warning from Goddard and a return to the feet.

A point deduction from Vera took place for the same infraction in round three, putting him even deeper in a hole, and Grant was able to put together enough offense of his own to wrap up the round and the fight.

Doncaster’s Scott Askham got his home fans up and cheering in his middleweight bout against Chris Dempsey, knocking out the American in the first round.

Dempsey looked for a takedown as soon as referee Leon Roberts waved the fighters together, and he got it, proceeding to land strikes from the top as Askham tried to sink in a submission from the bottom. In a scramble in the second minute, Askham reversed position and then rose to his feet. Dempsey kept the pressure on in the clinch, but Askham suddenly threw him to the mat. As the fighters rose, Askham took his foe’s back, but the Pennsylvania product got free. Moments later, a straight left staggered Dempsey and a left head kick finished the job, Roberts stepping in to call the bout at the 4:45 mark.

With another second or two, British featherweight phenom Arnold Allen could have had a knockout of Yaotzin Meza, but instead, he had to settle for a shutout decision victory over the Arizona veteran.

The unanimous decision read 30-27 on all scorecards.

Allen’s first round was strong both standing and on the mat, with the Brit’s ground work being particularly effective as he kept Meza from getting into an offensive rhythm.

The same was true in round two, although the second five minutes remained standing for the most part, with Allen controlling distance and landing crisp, technical punches.

Meza sought the takedown early in the final frame, but Allen was able to avoid the mat. Meza kept Allen locked up against the fence, but a stall in the action brought in referee Grant Waterman to separate the fighters. With under two minutes left, the bout hit the mat, with Allen in control until the two rose, and with the seconds ticking away, Allen flurried furiously, knocking Meza down with a series of blows. 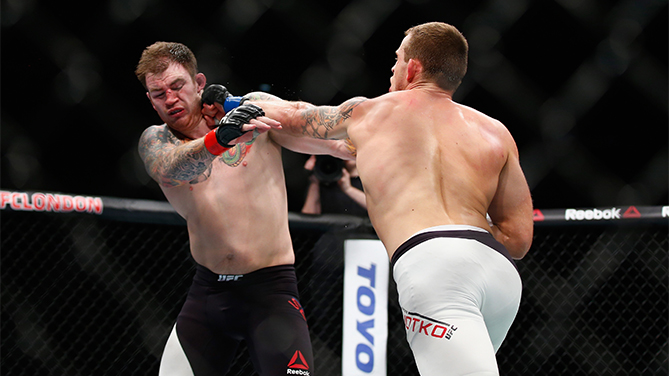 Pressure was the key theme of round one, as Scott was in Jotko’s face for the entire frame. Jotko’s movement was effective and he got in several shots, one which cut Scott on the nose, but the Brit landed some telling blows of his own, with a right to the head and kick to the body being the biggest shots.

As Scott’s pressure let up, Jotko had more space to move and work, and he had a solid second round. Jotko’s conditioning continued to pay dividends in the final round, with two takedowns in the closing stages of the bout ultimately aiding in his win on the scorecards. 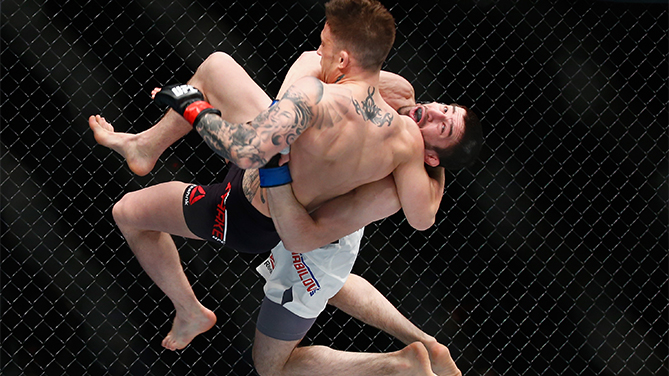 In his first bout since February of 2015, lightweight prospect Rustam Khabilov snapped a two-fight losing streak with a three-round unanimous decision over Norman Parke.

Khabilov scored the first takedown of the fight in the second minute, and while Parke got up quickly, Khabilov’s uppercuts were scoring well while standing. The rest of the round was far from action-filled, giving Khabilov the edge after the first five minutes went in the bank.

Parke came out more aggressively in the second, as he pressured Khabilov with strikes and the threat of a takedown. A straight left got Khabilov’s attention, and Parke kept that attention by mixing up his attacks as he cut his foe over the right eye. With a minute left, Khabilov was able to steal the momentum back with a takedown, leaving the judges to decide the frame.

In the opening minute of the final round, Parke scored with a takedown and then took the Dagestan native’s back as he searched for a rear naked choke. But midway through the frame, Khabilov escaped, reset himself and got a takedown of his own. Khabilov fired off some strikes from the top, keeping Parke grounded, and that was the story for the rest of the fight for the “Tiger.” 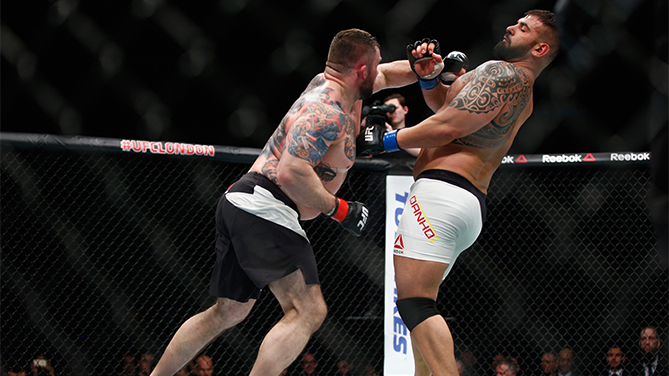 The heavyweight battle between Poland’s Daniel Omielanczuk and German newcomer Jarjis Danho came to an unusual end, with a low blow forcing the bout to the scorecards in the third round, where Omielanczuk took a majority technical decision.

The bombs were flying early between the two big men, each absorbing the thudding punches well. But in the second minute, after a brief clinch, Omielanczuk rocked Danho twice, once upstairs, once to the body. Danho recovered and clinched up with Omielanczuk once more, and the two proceeded to scrap at close range until referee Leon Roberts restarted the action with 1:25 left. After another clinch, Roberts restarted the two again just before the end of the stanza.

The pace slowed in the second, as fatigue set in on Danho. On the verge of scoring a finish, Omielanczuk landed an illegal knee on his downed foe, but when the bout resumed, the Warsaw product went back on the attack, putting Danho in trouble again before the horn intervened.

Both fighters were winded in the final round, with a low blow by Omielanczuk earning the combatants a brief rest and Danho a visit from the Octagonside physician. And shockingly, the fight was called, with Danho unable to continue. The bout then went to the scorecards, with Omielanczuk picking up the victory.

Just moments into the fight, a right uppercut rocked Gouti and sent him to the canvas. Gouti tried to clear his head, but as he began to sit up, Packalen took his back and sunk in the rear naked choke and a tap out resulted.

In the lightweight opener, David Teymur won a clash of Swedish vets from The Ultimate Fighter 22, knocking out Martin Svensson in the second round.

A tick and move strategy worked well for Teymur, as he picked and poked at Svensson, who was unable to get the bout to the mat. Surprisingly, it was Teymur securing the only takedown of the round, as he put his foe on his back in the final seconds.

In the second, Svensson’s desperation to get the fight to the canvas was evident, as his shots were getting more telegraphed. Teymur sensed it and fired off a left uppercut that landed flush, putting Svensson on the deck. Follow-up strikes ended matters, with referee Neil Hall stepping in at the 1:26 mark.