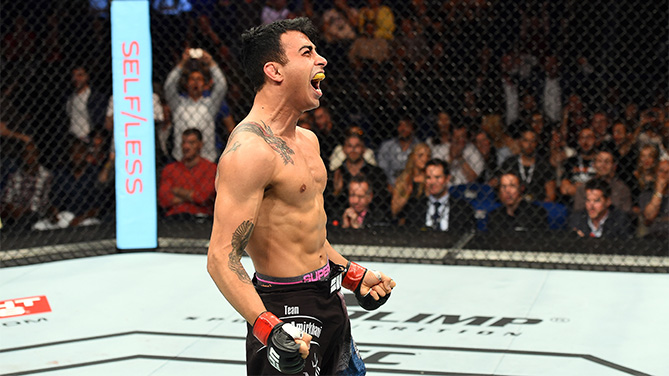 It took a bit longer than his eight-second finish of Andy Ogle in his UFC debut in January, but rising featherweight star Makwan Amirkhani still fought like he was double-parked on Saturday, and he was just as impressive, submitting Mexico’s Masio Fullen in under two minutes at the O2 World Arena in Berlin, Germany.

“I wanted to give a show, whether I lost or won,” Kurdistan’s Amirkhani said.

He won, and he gave a show.

Amirkhani avoided trying a flying knee to start the fight, instead taking Fullen to the mat immediately. Seconds later, Amirkani had his opponent’s back and sunk in a rear naked choke. Fullen courageously tried to get himself free, but “Mr. Finland” wasn’t about to let that happen, with the Guadalajara native tapping out at the 1:41 mark. 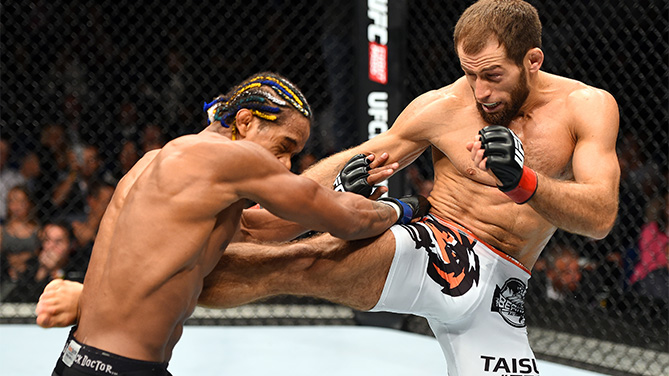 TAISUMOV vs. PATRICK
Highly-regarded lightweight prospect Mairbek Taisumov made it three straight Saturday, stopping Alan Patrick in the second round, handing the Brazilian his first pro loss in the process.

An even start to the fight was interrupted by back-to-back fouls by Patrick, a low blow and an eye poke, the latter nearly bringing a stop to the fight. When the action resumed midway through the frame, Patrick’s reckless attacks were greeted by flush power shots by Taisumov, allowing him to jump into the lead.

The defensive lapses of Patrick cost him the fight in the second, with a missed takedown attempt leaving him wide open for right kick to the head that put him on the deck. Taisumov finished matters moments later, with a barrage of strikes bringing in referee Kevin Sataki the halt the bout at the 1:30 mark. 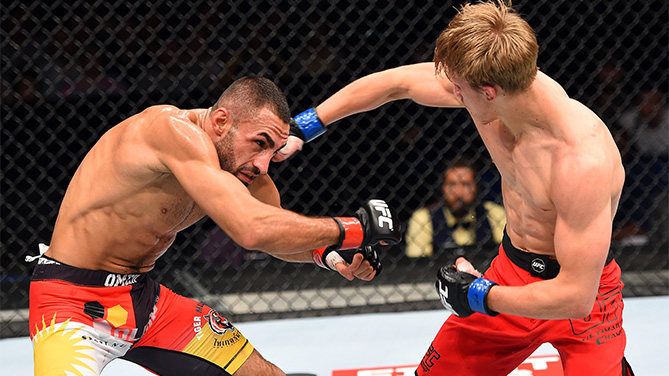 Short notice was no problem for 21-year-old British newcomer Arnold Allen, as he submitted veteran Alan Omer in the third round of their featherweight bout.

Omer’s hard 1-2s worked well for him as the bout opened, but when he got close, Allen fired back eagerly, and as the round progressed, he got busier with his attacks. Omer’s cool under pressure served him well, but with a little over a minute left, Allen began to rally, and he jarred the Kurdistan native as the fight went to the mat. Omer stayed busy off his back though, nearly catching his foe in a triangle choke.

Switching things up to start round two, Omer got the fight to the mat, but Allen rose quickly and dodged a second attempt, landing hard shots as he bulled the crowd favorite to the fence. Allen got a takedown of his own, but Omer reversed position as they scrambled upright, briefly taking his opponent’s back before they rose and clinched once more.

Omer continued to control matters at close range in round three, but as he looked for a takedown against the fence, Allen came in out of nowhere and locked in a guillotine choke, with Omer being forced to tap at the 1:41 mark.

“When I turned professional, my plan was to be in the UFC by 21, win my debut, and so far I've ticked them off, but I’ve got a few more to go,” Allen said. “Now I’m going to get back in the gym, let my hand heal, spend some time with my friends and family and then we’ll see who’s next."

Suffolk’s Allen, who replaced the injured Mike Wilkinson, moves to 10-1 with the win; Stuttgart’s Omer falls to 18-5. 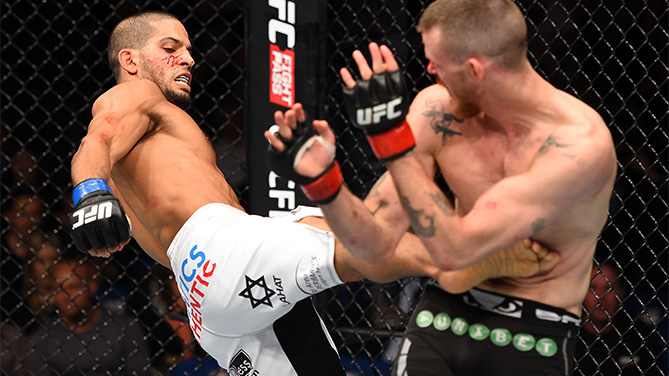 Lahat got the bout to the mat in the opening minute, Backstrom staying busy the whole way as he fired off elbows and looked for submissions from the back. With a little over three minutes left, Backstrom nearly locked in a gogoplata before sweeping his way into the top position and then taking his foe’s back. Lahat stayed cool under pressure as Backstrom tried to secure a rear naked choke and then an armbar, and the bell intervened before any further damage could be done.

Lahat landed several hard shots, including a flush right hand, that cut Backstrom on the forehead and put him back into the fight in the second round. By the midway point of the frame, Lahat was pouring it on and Backstrom looked winded. The fight strayed to the mat in the final two minutes, but as Backstrom tried to catch a breather, Lahat kept the heat on and got into the mount position. An arm bar followed, and though Backstrom got free, Lahat kept pushing for the finish until the horn sounded.

The pace dipped in the final round, yet Lahat’s striking still continued to impress, and even after a Backstrom takedown, the Israel native was able to get the fight back to the feet quickly. Backstrom did put the fight on the mat again, but he was too winded to put together a consistent offense outside of controlling the location of the fight. When it was over though, the Swede had no doubt that he had won the fight.

“I thought it went my way, especially when I heard that two guys scored it one way and then the other one the other," Backstrom said. "I clearly won the first round and the last. Maybe the second round could be a 10-8, and then it could be a draw, but there was no way it was his fight. I won the first and last rounds, there’s no doubt about it. It is crazy to say otherwise, at least from where I was standing and I had the best seat in the arena. He was actually really tough and I didn’t think I was going to get as tired as I did. I’ve gone through some small problems with my camp, so maybe that’s why I got so tired. He landed some mean, mean body shots. Those were crazy body shots, man. If he hits me in the head, I don’t care about that, but I’m not going down on a body shot. So yes, he was pretty tough. But I did what I wanted to and I got back up in the third round. But congratulations to him; he was a good fighter. I’m going to watch the fight again and I hope he does too, so we can determine who was the real winner.” 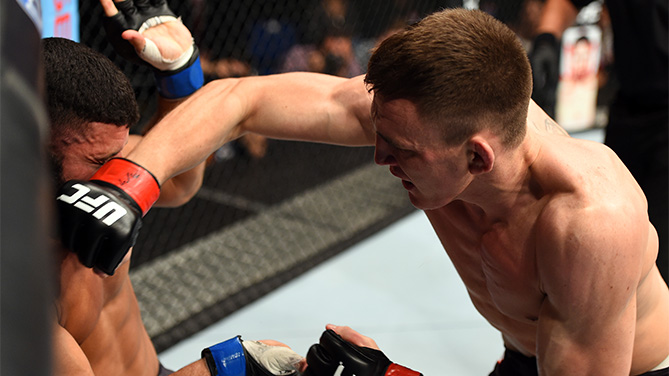 England’s Scott Askham showed no ill effects from the first loss of his pro career to Magnus Cedenblad last October, as he knocked out Antonio Dos Santos in the first round of their middleweight encounter.

“I am feeling absolutely amazing,” Askham said. “I had an awesome camp and I feel great. It went how I expected and I got to finish him. We exposed holes in his game. He came out fast but I was prepared. The support from my family in the crowd always helps me and it’s only going to get bigger. I pick up fans wherever I go and I fight exactly in the style that UFC fans want to see."

An off-balance fall after a thrown kick by Askham opened up the door to Dos Santos’ offense, as he threw several hard haymakers at the Brit. Askham weathered the early storms from the Brazilian, and midway through the round, a picture perfect left to the jaw dropped Dos Santos. Remarkably, Dos Santos survived the shot, but a follow-up knee once the two rose put an end to matters, referee Leon Roberts intervening 2:52 into the round.

Doncaster’s Askham moves to 13-1 with the win; Salvador’s Dos Santos falls to 6-3. 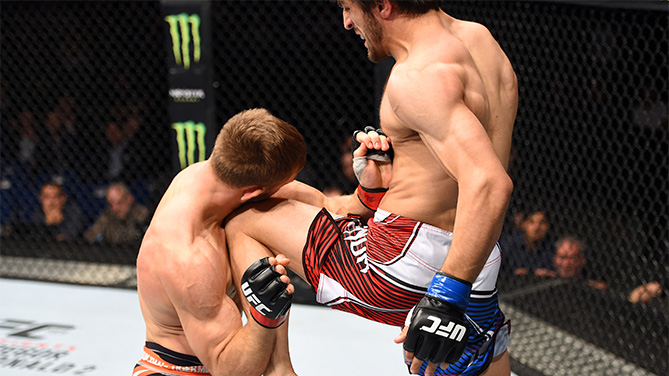 Russian lightweight powerhouse Magomed Mustafaev won in abbreviated fashion against veteran Piotr Hallmann with a TKO due to cuts, but he was impressive nonetheless in nabbing his first Octagon victory.

“I am very happy to get the win in my debut fight in the UFC,” Mustafaev said. “Right now I will rest, but in the next fight, which I hope will be very soon, I will have a better training camp and a better fight."

The two European lightweights engaged in some heated scrambles in the early going, with Mustafaev heavy-handed blows giving him the edge, even with Hallmann occasionally getting the more favorable positions. But by the end of the round, Hallmann pulled ahead with solid ground and pound work from the top position.

Every shot Mustafev (12-1) threw was designed to end the fight, but Hallmann (15-4) took the blows well and closed the distance in order to control matters once more in the second. This time though, Mustafaev’s thudding shots bloodied his Polish foe’s face, and after a visit to the doctor, the cut over Hallmann’s left eye was deemed too severe for him to continue, the end officially coming at 3:24 of round two.

“I feel like after the first round, I was just getting warmed up,” Hallmann said. “I feel I controlled the fight. I think I could have done more to finish the fight when I got cut, rather than waiting to control the fight. Now I’m going to go back to training and I hope that the UFC gives me another chance because I feel like I did a good performance except for those ten seconds that I was not covering myself." 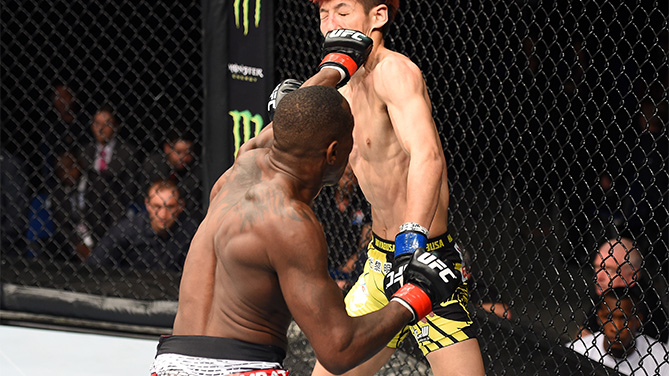 French prospect Taylor Lapilus made it two for two in the Octagon, winning his bantamweight debut with a second-round TKO of Japan’s Ulka Sasaki.

After kicking the fight off with several range-finding kicks, Sasaki went for the takedown and got it, but Lapilus bounced up immediately, resulting in an extended clinch against the fence. In the final two minutes, things finally heated up, with Lapilus landing hard shots at range and especially in close quarters, and he ended the round with a spinning elbow for emphasis.

Lapilus continued to stalk the elusive Shizuoka native in the second round, and after momentarily jarring his foe with a straight left, “Double Impact” didn’t let Sasaki off the hook, firing away with more lefts until referee Wolf Menninger halted the bout at the 1:26 mark.

"The fight went very, very well for me out there,” Lapilus said. “I thank all the French MMA fans and fighters who have supported me for this fight."