Amirkhani refreshed and refocused for Liverpool

Makwan Amirkhani knew how to make an entrance. In Stockholm, Sweden on January 24, 2015, the featherweight prospect needed just eight seconds to defeat Andy Ogle in his UFC debut and announce his arrival as someone the fight world needed to pay attention to.

“After the Andy Ogle knockout, everywhere I went in Finland, people knew me,” he recalled. “And the second fight and the third fight, when I won those fights, it became huge for MMA in Finland.”

But the instant celebrity began to take its toll on “Mr. Finland,” despite the fact that he appeared to be made for life in the spotlight. Then his trio of wins over Ogle, Masio Fullen and Mike Wilkinson led to a loss to Arnold Allen in March of last year, and Amirkhani finally decided that he needed to reevaluate everything.

On Sunday, he returns to face Jason Knight in Liverpool, and he will be the first to tell you that the old Makwan Amirkhani is back. 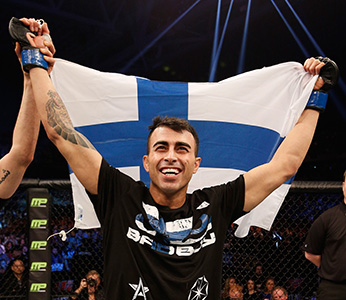 “I’m excited, that’s a good thing,” he said. “I’m happy. I don’t remember when I was this happy, honestly. It just feels amazing that I can do what I love the most. I’ve been waiting patiently to get back in the UFC cage and that’s something that I really look forward to. This year, when I was away, I kind of noticed that the only thing that makes me happy is winning and winning in the UFC and MMA. That’s my main goal in my life right now, competing in the UFC. So I’m happy to be back.”

It hadn’t been that way for a while, when life outside the Octagon wasn’t as easy to navigate as life inside those walls. Even relocating his camp to Dublin to work with the SBG Ireland team before the Wilkinson fight didn’t do the trick, even though he won that fight and continues to train with the John Kavanagh-led squad. But as he explains, the difference between his camp for the Allen fight and the one for his upcoming bout is night and day.

“I spent four months in Dublin for this fight, twice the amount that I was here the last time,” Amirkhani said. “The last time I was here, I was staying at the hotel and I was lonely and training was the only thing in my life there. It’s a good thing to have a focus and be into MMA, but maybe it’s not meant for everybody. When I was in the hotel and the gym and that was the only thing that I did for two months, I think that somehow affected me because I didn’t have any social life. This time, it’s been more fun. Last camp when I was here, I was counting the days until I could go back to Finland. And now, the feeling is the opposite – do I have to go back? (Laughs) I think I found my second home.”

And with his training situation sorted, everything else slowly came into focus for the 29-year-old, who can now look back to those heady days in 2015 with a fresh pair of eyes and assess them honestly.

“Maybe everything happened too fast for me,” he said. “People can handle situations differently. I had this bad side of being famous. I thought I couldn’t be myself like I was before the UFC. So I wanted to be alone and figure out what I really wanted for my life. Can I handle being famous and being the guy everybody wants to pull somewhere? Maybe it was good that I was one year away, so I knew if I wanted to be left alone and by myself, or did I actually enjoy it when I was winning the fights and the only thing that I was focused on was sport? And this year, I realized that the only thing that I love to do is sport, especially MMA. I love winning, I love showing the fans my skills and what I’m about. So I think I belong to the UFC and the cage, and that’s what I’m going to do for the rest of my life.”

Sounds like “Mr. Finland” is back where he belongs. Get ready featherweights.

“You remember when I won my first fight how happy I was,” he said. “I was really happy. And I think the UFC has that same guy back. A happy person, enjoying the life and every moment. You’ve got me back now. I just want to beat everybody who steps in my way.”