Amirkhani Ready To Put The World On Notice

“Anyone who hasn’t trained with me for the last few months doesn’t know what is coming and Saturday I will let the whole world know.”
By E. Spencer Kyte, on Twitter @SpencerKyte • Nov. 1, 2019

There is something about Makwan Amirkhani making his North American debut at Madison Square Garden as part of the biggest event of the year that just feels right.

A magnetic talent who has been one to watch in the featherweight division since winning his debut in eight seconds and then stealing the show at the post-fight press conference with his purple crushed velvet blazer, the 30-year-old Amirkhani is finally crossing the Atlantic to step into the Octagon for the first time.

“They knew that they needed somebody to handle this job and they knew that I could do it, so that’s why I’m here,” joked the ultra-confident Amirkhani, who enters this weekend’s showdown with New York native Shane Burgos on a two-fight winning streak. “It’s the most perfect time; it can’t get better.

“The timing, the opportunity, the place — everything is on time, everything is perfect,” he added. “But that only one part. It’s also me being in shape and happy, so we’re ready for Saturday.”

The charismatic and talented featherweight has admitted in the past that he hasn’t always been the most diligent when it comes to his preparation, which is nothing new in the fight game. Plenty of gifted competitors have allowed themselves to skate by on their natural skills and a healthy dose of confidence, believing that would be enough to get the job done and more often than not, they’re right.

With a 15-3 mark overall and a 5-1 record through his first six Octagon appearances, Amirkhani was clearly doing just fine with his old approach, but coming off his second-round submission win over Chris Fishgold in Stockholm at the start of June, the talented featherweight who is currently hovering just outside the Top 15 opted to make some changes in order to take his game to the next level.

“This is the first time where I’m living like an athlete — taking care of myself, my body, and investing in myself,” said Amirkhani, who completed his training camp with the team at SBG Ireland in Dublin.

“I haven’t done anything other than training. I have been training every morning and every night. This camp was different than other camps. I was spending 10, 12 hours working on my body — training, making food, preparing for the day, waking up early, going to bed early; everything was because of this opportunity.

“Anyone who hasn’t trained with me for the last few months doesn’t know what is coming and Saturday I will let the whole world know.” 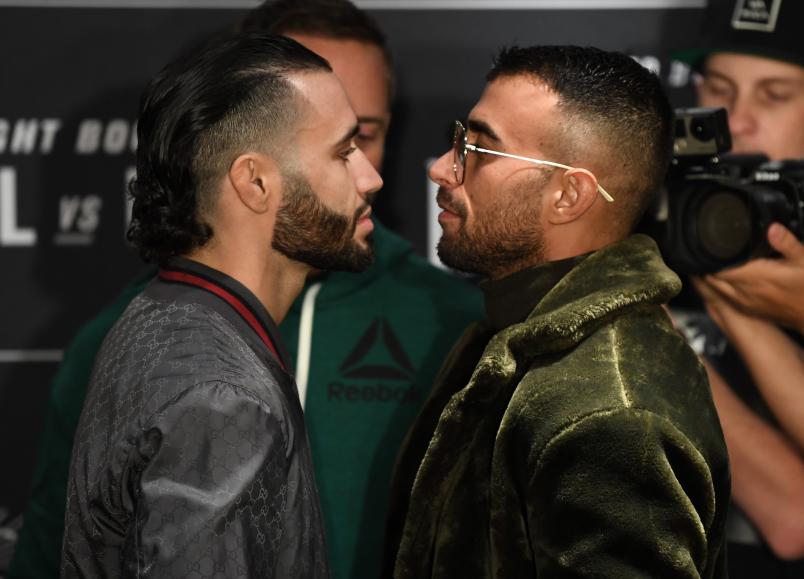 Skeptics will say that sounds like nothing more than the standard fighter-speak that precedes every fight — that it’s Amirkhani saying all the right things in order to hype up his performance and get people excited for his return this weekend — and that could very well be true. Just as some competitors can skate by on natural talent, some have also been known to spin a yarn whenever a microphone is on, knowing that a quality quote before the fight is crucial to getting people to tune in, even if the performance doesn’t match up on fight night.

He’s always been frank in assessing his efforts in camp and in the cage, as well as opening up about his personal life, and guys like that don’t tend to just speak trivially, so when Amirkhani said he’s been motivated to take his training to a different level, it’s a smart move to believe him.

“I love the process now too and I can’t wait to see how much better I will get with more time,” he added. “I am actually in the best shape that I have ever been in before, so that should tell you what I think about this opportunity.”

If there is better yet to come, Saturday is a fine time for Amirkhani to show it, as after proving he’s deserving of a step up in competition through his first six Octagon appearances, he gets one in the form of the Team Tiger Schulmann standout Burgos.

Like Amirkhani, “Hurricane Shane” has gone 5-1 through his first six UFC starts, with his lone loss coming against Calvin Kattar, who headlines next weekend’s return to Moscow opposite Zabit Magomedsharipov. Unlike Amirkhani, however, the 28-year-old with a 12-1 record has already tested himself against Top 15 competition and cracked the divisional rankings, entering Saturday’s contest off split decision win over veteran Cub Swanson and carrying the No. 12 ranking next to his name.

Despite his similar record and recent results, Amirkhani isn’t overly impressed and promises that no matter where the fight takes place this weekend, he’ll have his way with Burgos.

“I don’t care about him or where he’s from or his background — this is about me and the result will remain the same.”

And then, he’ll go back to the gym, back to training with renewed vigor and purpose, and back to chasing down the featherweight title.

“Sometimes I feel that the things that happen in my life are meant to happen and this is one of those moments,” he said of Saturday’s contest. “I know that this train doesn’t stop on Saturday — it will continue; this will be just one stop.