Amir Sadollah - Student of the Game

“You fight at this level, you have no choice to get better. Either you get better or you’re out. And that’s something that kinda vibes with my personality." - Amir Sadollah 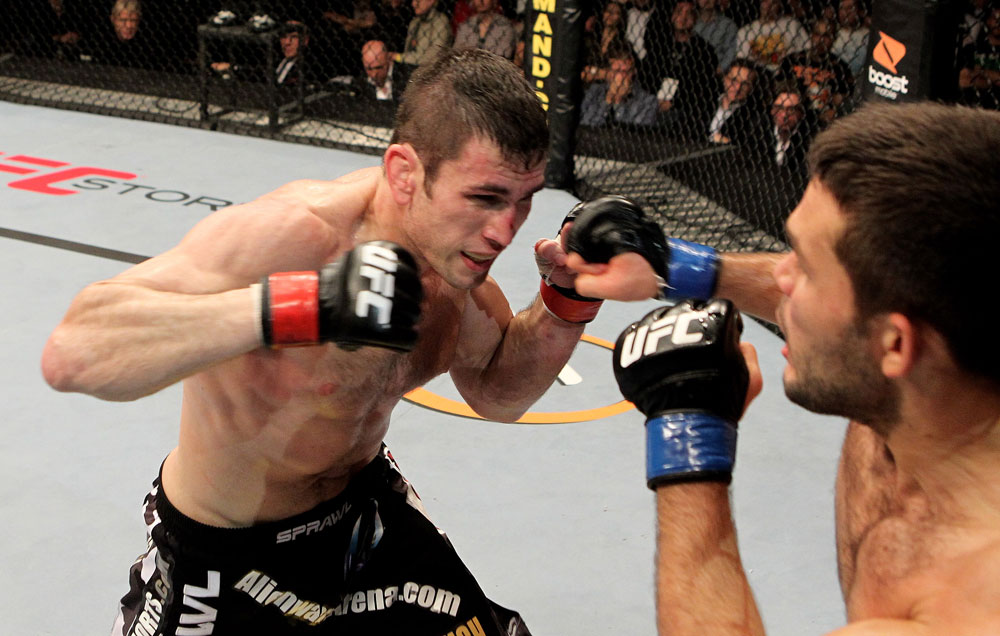 First it was kickboxer Duane “Bang” Ludwig. Next up was jiu-jitsu ace James Wilks. Finally, entering the fray and staying there was jack of all trades DaMarques Johnson.

What do the above welterweights have in common? They’ve all been opponents for Amir Sadollah in the last month. For most fighters, one switch can cause chaos in a training camp; two, that’s off the charts panic. But not for Sadollah, who continues to set new standards daily with his low-key and intellectual approach to the sport.

“Fortunately, my approach to the fight has always been multi-dimensional, so I didn’t have to radically change anything,” he said. “There are differences, but for the most part it’s still the same training for me and I’m still working on things that I think are my strong suits.”

It really shouldn’t be like this. As everyone knows, Sadollah was the quiet underdog who ran the table on The Ultimate Fighter seven, defeating Steve Byrnes, Gerald Harris, Matt Brown, and CB Dollaway (twice) to take the season title. Then, with no pro fights to his name, he has jumped into the Octagon to win three of five bouts, basically learning as he goes. It’s a Cinderella story that shows no signs of ending three years after it began.

“I try to figure out where all the time went,” he laughs. “This career makes time fly. I feel kinda young because it only feels like three weeks have gone by since the show, and in reality it’s been three years.”

And these days in the UFC, with turnover rates rising in order to trim the roster, to be here for three years is a feat in and of itself. Sadollah doesn’t look at such matters though. Frankly, there’s not enough time to reminisce.

“I don’t ever want to look at my career as a summary until it’s over,” he said. “I obviously want to look at what I’m doing and what I’ve done, but I don’t care if my record was 10-0 in the UFC, every fight is just as important to showcase your skill and showcase what you have.”

That’s not to say he’s walked through the welterweight gauntlet unscathed. A controversial stoppage loss to Johny Hendricks and a clear-cut decision defeat against Dong Hyun Kim sandwiched impressive back-to-back wins over veterans Phil Baroni and Brad Blackburn, and these early erratic performances, while expected, kept him from making significant forward progress in the talent-rich division.

But at UFC 122 last November, Sadollah seemed to put it all together in his decision win over Peter Sobotta. It wasn’t a flashy knockout or decision win, just a solid, mature effort that saw Sadollah emerge as a dangerous fighter on his way to the next level.

“I’d be happy to agree with that,” he laughs. “It’s something you work your whole career to get and it’s ever-evolving. The ability to put stuff together and implement something that’s working for you and not get rattled, I think I did a good job of that that night, but it’s not something I think ‘okay, I got that.’ It’s ever-evolving and every fight I want to be working on that ability and getting even better.”

It was almost as if everything clicked and that all the hard work over the last few years in Vegas was paying dividends. And when each UFC fight could be your last, there was no better time to hit that clutch home run.

“You fight at this level, you have no choice to get better,” said Sadollah, now 5-2. “Either you get better or you’re out. And that’s something that kinda vibes with my personality. I have that all or nothing mentality with a lot of things, so I enjoy that. It’s obviously harder, but at the same time, that’s the way I like it. I put high expectations on myself and high benefit with high risk is something I enjoy and something I don’t mind working for.”

The work is far from done. Sadollah knows it as well, and he’s doing everything he can to soak up all the knowledge available to him. Before the Sobotta fight he even got to Europe a few weeks early to work in Holland with his coach Marco van den Broek.

“It worked out for a couple reasons,” said Sadollah, whose bout with Sobotta was in Oberhausen, Germany. “My trainer lives in Holland and his gym wasn’t far; it was less than an hour away from where I was fighting, so it worked out well. I went out there a few weeks early and I like to train with those guys to sharpen up my standup, and obviously it was an advantage to be so close. It wasn’t like a big traveling trip for me, so it worked out well.”

And when it comes to pure striking, Sadollah makes it clear that Holland’s stellar reputation is well-deserved.

“Yeah, I really think so,” he said. “For pure K-1 stuff and striking, absolutely. I think there’s something to learn from every style of martial arts and what I like about their style and what I think works well in MMA is that it’s a very aggressive, forward pressure style of striking, and that plays into how I like to fight anyway. It’s got its pros and cons. Walking forward you have to be more wary of the takedowns, but at the same time you can use your offense and defense. For me personally, I enjoy the style and I think I take away a lot from it. As long as you train with your specific skill in mind, I think you can make anything translate.”

Everything is coming together for Sadollah at precisely the right time. At 30, he’s probably hitting or about to hit his physical prime, and with nearly 13 rounds of UFC experience under his belt, he’s run through the gamut of emotions that a fighter can go through in the Octagon. But as he explains, that can be a double-edged sword, so he never wants to lose that ability to expect the unexpected.

Sadollah has no idea what’s going to happen with Johnson on Saturday night. The Utah product has shown the ability to knock out or submit his UFC foes, and he’s also had a couple off-nights. He’s a gameplanning nightmare, especially when he’s the third fighter you’ve gameplanned for. But at this point, Sadollah doesn’t get rattled; conversely, he’s learned to enjoy the game more than ever.

“One thing that I’m noticing is that I’m able to have more fun with this and enjoy my job and I really do now,” he said. “When I first got off the show, the biggest difference was that I was more stressed about everything. I was trying to drink from a fire hose of information and now I’ve learned to process a lot and let things in at a slower pace, and I have the ability to just stop and enjoy this. Sometimes I have to look back and say I get paid to train, I get paid to do what I love, so it’s something that’s definitely getting better with time.”