Amir Albazi | The Prince Is Here

Whether for a bachelor party, a long weekend or a permanent relocation, Las Vegas possesses a near-mystical power to change you forever. In the case of Amir Albazi, that’s a good thing.

But when it came time to continue evolving his MMA game, a move to “The Fight Capital of the World” was even more than he expected.

“Coming to Vegas and actually just focusing on MMA and having the help of the UFC PI next to me and completely new coaches on a high level, like Dewey Cooper. I have Xtreme Couture and I'm training with all these great athletes that I’ve just seen on TV…I just take everything in. I'm training nonstop because of that, because I know this is something special I have. I just keep working with it and I know I'm improving every day. So it's just a matter of time before I become a champion. I know it.”

It doesn’t take the flyweight long to start talking about being a future champion. He’s been dreaming about it since he was a young teen, and with a No. 11 ranking next to his name after just two UFC wins, he can nearly taste it. The move to Las Vegas only accelerated those feelings, and after nearly 18 months of waiting to fight, it only strengthened his resolve.

How To Watch UFC 278 In Your Country

“It sounds like a cliché every time people say, ‘This time off is the best thing that ever happened to me.’ But it really did. I did struggle with injuries, but that's part of the sport. But also it developed my game a lot. I changed a lot of stuff in my own career.”

With injuries and cancelled fights in the rearview, Francisco Figueiredo finally emerged as his next opponent. They’ll meet on the early prelims of UFC 278: Usman vs Edwards 2.

“I've just been itching to fight for the past months and that's going to show on Saturday night. I’m going to come in and bring everything to Figueiredo. I'm not going to take no steps back. He has to be ready, and if he's not, he's going to go out in the first round. You're going to see a new Amir Albazi on Saturday night.”

Not that the old Albazi was anything to sneeze at. He’s 2-0 in the UFC and has compiled a 14-1 pro record across promotions like Brave and Bellator on the strength of a wicked grappling and jiu-jitsu skill set. If he’s advanced as much as he claims, the already-wild division could likely have its hands full for the foreseeable future.

“I always come in and put on a performance. Always. Since my debut with the first triangle finish of the year to the second fight where I just outboxed him--people thought I was just a jiu-jitsu guy---I just showed my striking instead. So I'm just looking to perform on all levels. This time I'm looking for an early finish; straight away. I'm just looking to get there, submit another black belt and get back home.

“I always try to steal the show. Of course, it's harder on these bigger shows. But I'm here to take all the attention every time. You know, I am very greedy (laughs). So I'm looking to show people what I have. They're going to see on Saturday night that ‘The Prince’ is here.”

If you’ve been paying attention, you already know that some of the most truly epic performances in the promotion have come from the flyweight division the last couple years. A division that once had an uncertain future is now buzzing with an otherworldly sense of momentum, and Albazi is proud to be a part of it.

“The division was gone couple of years ago. Exactly when I felt like it's time for me to step into the UFC, the division disappeared. So only very few flyweights stayed there, still trained. And that's exactly what I did. And now we see a new awakening of the flyweight division. It's like exciting fights every weekend. Every time a flyweight fight is on, it’s exciting. People used to say that that was the most boring division because Demetrius Johnson held it and dominated everything. But I feel like now it's waking up to be alive, and I'm just looking to add one more performance to the flyweight division, and I'm looking to get into the Top Ten after this fight and start calling out one of those names.”

When his family first emigrated to Sweden in his youth, he didn’t speak the language and was bullied for being foreign. The first time he saw the UFC on TV, he was hooked and never looked back. As he inches ever closer to his ultimate goal, he still finds the moments of wonder. 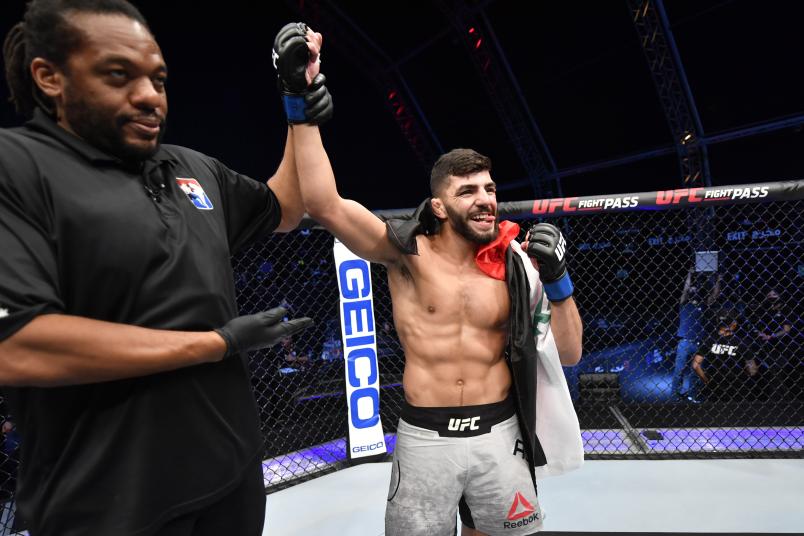 Amir Albazi of Iraq celebrates after his submission victory over Malcolm Gordon of Canada in their bantamweight bout during the UFC Fight Night event inside Flash Forum on UFC Fight Island on July 19, 2020 in Yas Island, Abu Dhabi, United Arab Emirates. (Photo by Jeff Bottari/Zuffa LLC)

“I still have that feeling sometimes. I'm still a fan of the sport, like I was when I was like 13, 14 years old. I remember watching the UFC, and it used to always come on late night in Sweden when I used to watch it, seeing all these fighters. Before I got into the UFC, I watched the UFC every weekend and every weekend I see these guys and now I see Paulo Costa walking around. I see José Aldo. I'm actually on the same card as these guys! The week before this, I was watching the fight card like the biggest fan ever. Watching all the fights, watching all the fighters, and I'm like, ‘Oh, s***, I'm actually fighting on the card after this!’

“So it feels good. It feels good to be able to achieve what you always dreamed of. But my mission is not complete. My mission is complete when I get the belt; I'm not just happy to be here. That's why it just hits me from time to time. My focus is on getting that belt in the flyweight division and as being the first Iraqi (champion) in the UFC. No one has ever done this from my home country, ever. So taking a belt back to them and taking a belt back to the Middle East as the first guy from there to ever be a champion, that would be a dream. That would be something that would make me smile every time I think about it.”