The Amazing Voyage of Anthony Perosh

"I’ve trained so hard and for so long, and I just want to test it. I’m
not gonna be happy until I’ve done as much as I can and gone as far as I
can." - Anthony Perosh 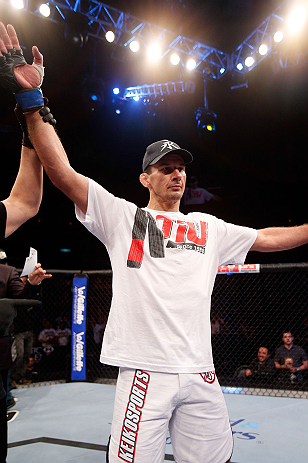 The Perosh Army is growing. With each passing win, light heavyweight Anthony Perosh adds more and more followers, and not just those who appreciate his jiu-jitsu prowess or the fact that he hails from Australia, but a legion of 40-somethings that have adopted the Sydney native as their new hero.

“I hope so,” laughs the 41-year-old Perosh. “I’m getting a kick out of it too. I really hope other people enjoy it, and hopefully the older guys and girls out there are inspired a little bit too and are on my side. It all makes it worthwhile.”

It’s been quite the ride over the last couple years, and that may be understating things. A former heavyweight who went 0-2 in two UFC bouts in 2006, Perosh went back to the drawing board, put together a series of wins on his home turf with just a couple losses sprinkled in, and when Ben Rothwell fell ill during the UFC 110 fight week in Sydney in February of 2010, the local favorite stepped in on just a couple days’ notice to face Mirko Cro Cop.

Perosh lost that fight after a courageous effort, but the most important takeaway from the bout was that he earned himself another fight. A year later he moved to 205 pounds and got that fight, submitting Tom Blackledge in Sydney. That would have been enough of a happy ending, but Perosh wanted more, so he kept going. He has since won three of his next four entering Friday night’s bout against Ryan Bader (Saturday in Australia), and despite going past the age when he originally wanted to stop fighting, he’s still here.

“Back almost four years ago, I told myself I wanted to finish fighting by 40,” he said. “That was my goal. I figured if I was in the UFC and had three fights a year, I would know where I was at. But I guess with injuries and people pulling out of fights, I haven’t had three fights a year. I’ve had six fights, so I went with the flow. I had win, win, win, then I had that bad loss and I didn’t want to finish there. I didn’t think I was ready to finish. I was still mentally strong and physically strong, and here I am still.”

The three wins over Blackledge, Cyrille Diabate, and Nick Penner were followed by a 14 second knockout loss to Ryan Jimmo in July of 2012. Then a broken toe sidelined Perosh until August of this year, when he squared off with Vinny Magalhaes in Brazil at UFC 163. It was probably a must win situation for the Aussie, but what happened next not only put him back on the winning track, but erased the seven second loss in the most perfect of manners: a 14 second win.

“Pretty good, huh?” laughs Perosh when asked about his Knockout of the Night win over Magalhaes.

“It’s fantastic. Not only that, but I did it with strikes. So not only did I get a fast finish, but I did it with strikes, and got some extra respect from everyone around the world, which was really cool. Even though I’ve been working on my striking the last three years, it was good to show it. Coming off that really bad loss last year, I couldn’t have written a better story for a comeback fight, so I was really happy for the win.”

Forget the Magalhaes fight; Perosh’s entire run since 2011 is one of the sport’s great stories, and the best part of it is that it’s still going on, even though he admits that it would have been nice if it started a little earlier.

“I wish it came together five, six years ago,” said Perosh. “I guess I just didn’t have the coaching staff behind me and I didn’t have the facilities behind me, and the way I train in terms of technique and strategy has changed a lot and the conditioning side has changed a lot. I didn’t have any of that five years ago, but in the last three years I made a big effort to find the best people in all those areas because I don’t just want to make up the numbers. I want to be a contender.”

If he beats Bader this week, that just might be the case, as unlikely as that scenario may have seemed when he was called in on short notice to fight Cro Cop.

“I beat Bader and it shoots me to number ten or maybe just outside the top ten, where I can really ask for a top ten guy,” he said. “But if I lose, then it kind of puts me back to the middle of the pack or the bottom half of the rankings, and we’ll all have to fight each other again to get back into the top half. And at this stage, I don’t have the time to do that, so this is definitely the biggest fight of my career.”

He’s right, but when he says it, there’s no fear in his voice, no nerves. It’s as if Anthony Perosh has had the biggest fight of his career over and over since 2011 and he’s still standing. And at this point, he’s just going to ride on until the wheels fall off.

“It’s just the competitor in me,” he said. “I’ve trained so hard and for so long, and I just want to test it. I’m not gonna be happy until I’ve done as much as I can and gone as far as I can. Being honest, I’m not fighting for the money or the glory; I just want to really see if my stuff works and if I can beat the other guy.”