It was quite a year for UFC women’s bantamweight champion Amanda Nunes in 2016, as each of her appearances took place on the biggest stage possible in events that captivated the MMA world.

She was one half of the main event in two of those shows – her championship win over Miesha Tate at UFC 200 and her first successful title defense five months later against Ronda Rousey at UFC 207. Yet despite running her winning streak to three, four and then five and rising to the top of the division, her UFC 213 headliner with Valentina Shevchenko this Saturday feels like the first time she has really been front and center heading into a championship fight.

While she may be able to laugh it off now, the intense focus on the returning former champion irked the proud Brazilian champion in advance of their meeting last December. She understood why it was happening, but headed into the fight intent on proving that Rousey’s time as the most dominant force in the division was over and she did so in convincing fashion. 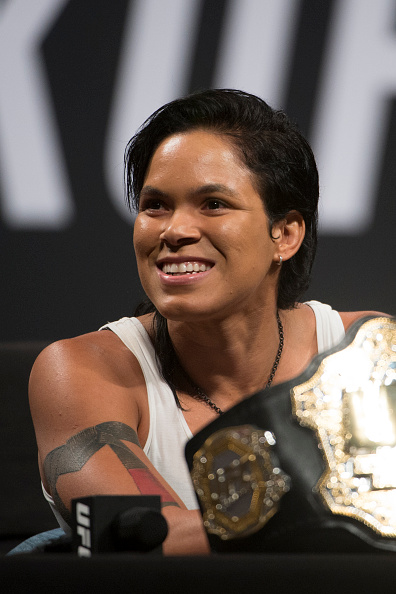 It was the type of performance that solidified her championship standing and, had it come against anyone else, would have catapulted her to new heights of stardom, but because it came against Rousey, the post-fight focus never really landed on the champion. Everything centered on the vanquished challenger, while the stories on the triumphant champion and her impressive 2016 campaign could only be found below the fold on Page 2.

As a result, Nunes heads into her second title defense as a champion still surrounded by skeptics, still dealing with fans who aren’t quite convinced that the woman who ran through Tate and Rousey in consecutive contests is capable of ruling the division long term and deserving of their undivided attention.

“I still have to keep proving myself; I have to keep winning and put on a show,’ she said in regards to cementing her place atop the division with those who remain unconvinced. “It’s not going to be easy; it takes time until people realize ‘she’s the real deal’ or whatever they’re gonna think. It’s long, but one day people will think I’m the best here.

“I think the thing that I have to show is that I can keep evolving and winning fights, but I’m okay with that,” she added. “My whole life has been like that.

“This thing doesn’t bother me because it is what it is. If you have to go through this, I’m stronger for going through this.”

Nunes takes that “stronger having gone through it” view on her first fight with Shevchenko as well.

The two met for the first time in the opening bout of the UFC 196 main card last March in Las Vegas. After defeating former Strikeforce champ Sarah Kaufman in her short-notice promotional debut three months earlier, Shevchenko entered her sophomore appearance as an intriguing addition to the division and Nunes, having earned a handful of solid victories but never having reached title contention, appeared to be the perfect litmus test for the decorated striker.

It turned out to be an outstanding fight, one where the final tallies don’t tell the whole story.

Though Nunes walked away from the MGM Grand Garden Arena with a unanimous decision win after dominating the action over the first two rounds, Shevchenko rallied in the third and had all the momentum on her side when the final horn sounded. Most who watched the fight wondered how the outcome might have changed had it been a five-round affair.

With the intrigue stemming from the conclusion of their first encounter still fresh in the public’s minds, the chance to see them run it back in a potential five-round fight made this a compelling contest even prior to it being announced. And the interest has only increased as the two have gotten testy with each other at various promotional events and media stops.

“I think it’s only competitive for me,” Nunes said of the tensions between the two, which got a little physical when they faced off at the Summer Kickoff press event in May. “But I don’t think so for her; she seems more personal. For me, I’m completely okay with things.

“Whatever happened that night happened – doesn’t mean it’s going to happen again or we’re going to do it again because it was in that moment,” she said of the altercation in Dallas. “Sometimes thing happen in moments you can’t control, but I have nothing personal against Valentina. I have respect for her as an athlete and that’s it.”

Whether that feeling is mutual and regardless of whether fans are fully behind her reign as champion are ultimately of little concern to “The Lioness,” because at the end of the day, she’s only focused on one thing.

“I’m here to do my job, be champion and defend my belt.”