With A Signature Victory Over Former Champion Jessica Andrade, Amanda Lemos Believes She Could Stamp Her Ticket To A Shot At The Strawweight Title.
By E. Spencer Kyte, on Twitter @SpencerKyte • Apr. 19, 2022

Heading into her first appearance of 2021, Amanda Lemos was flying under the radar in the strawweight ranks. She’d won a pair of contests since returning to action on the final fight card of 2019 in Busan, South Korea, but despite her recent efforts and solid overall record, there were several other Brazilians ahead of the native of Belem on the list of intriguing emerging talents in the 115-pound weight class.

But a win over former Invicta FC champion Livinha Souza in March piqued people’s interest, and when she knocked out Montserrat Conejo in spectacular fashion four months later, everyone started to take notice. After closing out the year with a split decision win over divisional stalwart Angela Hill in December, Lemos moved into the Top 10, and now she’s starting her 2022 campaign with a main event assignment opposite former strawweight champion Jessica Andrade on Saturday night.

“Last year was amazing,” Lemos said through a translator. “Three fights and three wins, and now off to a great start competing on the main event; I am really grateful for this opportunity.”

Ironically, Lemos followed a similar path to Andrade in terms of reaching the UFC, accepting a short-notice fight in Glasgow, Scotland against veteran Leslie Smith at bantamweight, much like how her opponent this weekend debuted in the 135-pound ranks as a replacement for Miesha Tate against Liz Carmouche.

Both women lost their respective debuts, and Lemos was suspended for two years after testing positive for a banned substance following the contest. When she was readying to make her return, her team suggested she do so at flyweight, but the powerful striker had her sights set on strawweight instead.

“It was never my intention to fight at bantamweight,” began Lemos, who submitted Miranda Granger in her divisional debut and followed it up with a unanimous decision win over Mizuki the following summer. “However, I was offered a fight in that weight division and it was my chance to join the UFC, so I accepted the fight. 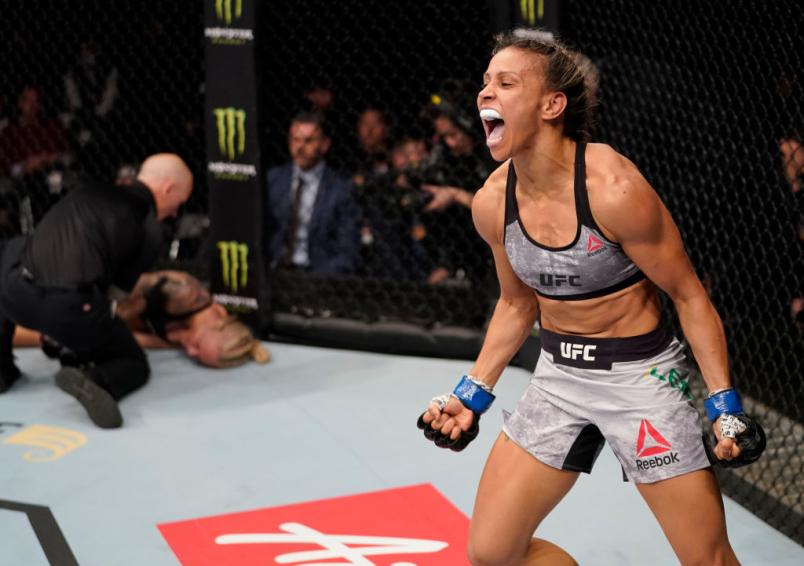 “Later, my team suggested I should move to flyweight, but I mentioned that I would like to switch to strawweight. They were concerned that I might miss weight, but I assured them that I would be able to make weight — although, to be honest, I was not sure whether it would actually be good or whether I would feel well.

“It was something I wanted, and I am glad it all worked out really well.”

As emphatic and impressive as her victories over Souza and Conejo early in the year were, the real turning point moment that showed Lemos could be a contender in the 115-pound weight class was her battle with Hill on the final event of last year.

The Brazilian entered with a dozen pro fights under her belt; Hill was making the 24th start of her career, with 18 of those appearances coming inside the Octagon. She’d faced a litany of top names and proven herself to be a tough out for anyone standing across from her, and she was against Lemos, as well.

The bout went the distance and the outcome hinged on the final round after each of the three judges awarded Lemos the first and Hill the second. Two saw things in favor of the Brazilian, leaving Hill to deal with another bitter split decision setback and Lemos to savor the sweet taste of victory.

“I was actually confident I had won the fight,” Lemos said when asked about the contest. “However, whenever it goes to the judges’ scorecard for a decision, you never really know how they are going to evaluate and score the fight, so I will always strive to win the fight. I made a few mistakes; it was a tough fight. 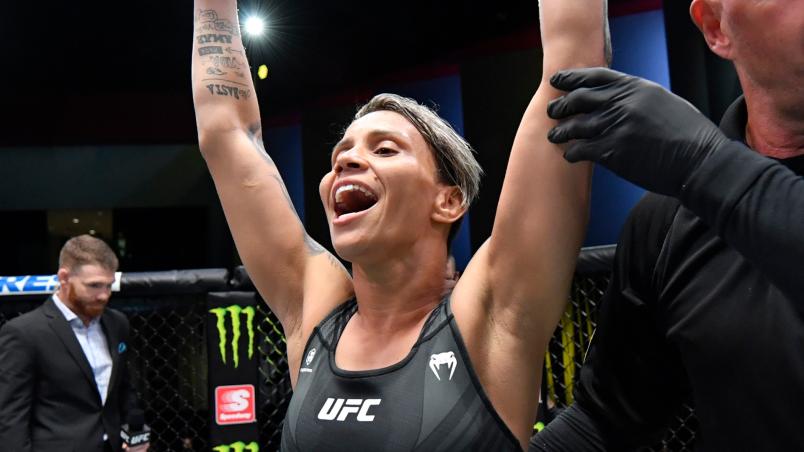 “Angela is a seasoned fighter, well respected and notoriously tough,” she added. “It was definitely a remarkable accomplishment, but it was also important to make me realize that my training still required a few adjustments.”

One of the keys for Lemos last year was staying active, and Saturday’s clash with Andrade sees her maintain that steady pace. It will be her fourth fight in 13 months, and she hasn’t gone more than five months between appearances since her bout with Souza at UFC 259, which is something Lemos hopes continues after her bout this weekend.

“Staying active is a great motivation,” she said. “I was glad to be able to fight three times last year, and it will not be different this year.”

If it is different, it will be for positive reasons.

Saturday’s contest with Andrade, who returns to the division following a three-fight stay at flyweight that saw her earn a pair of victories and fall to Valentina Shevchenko in a championship fight, has the potential to carry Lemos into title contention.

Should that come to pass, logging two more fights in 2022 might be difficult because options are limited in the upper echelon, and staying active might have to take a backseat to facing the best the division has to offer.

“I was really happy to learn that I would be fighting against Jessica,” Lemos said of the pairing with Andrade. “She is Brazilian and the former champion, therefore I used to root for her, and now I will have the chance to compete against her. This is our job and I am sure we will put on an amazing show for the public in attendance and watching all over the world. 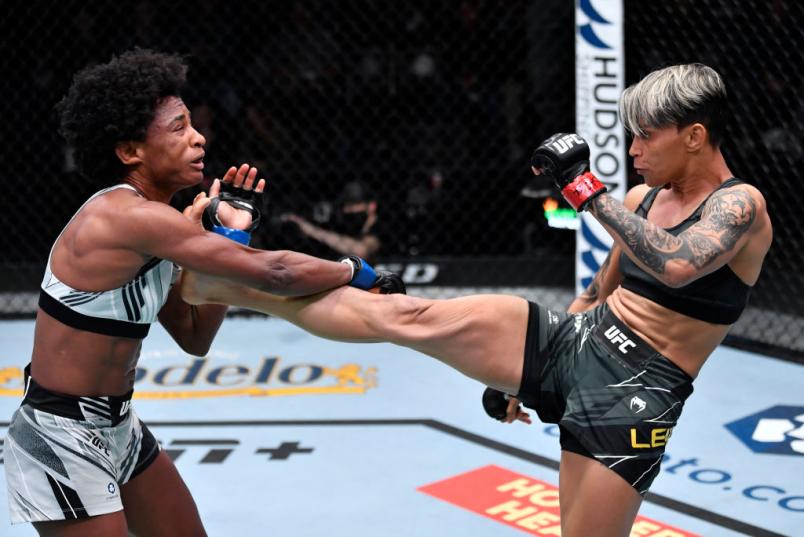 “What excites me the most is knowing that if I win this fight, I will be one step closer to the UFC belt,” continued the streaking 34-year-old. “I feel like I am on the right path to fulfill my goals and realize my dream, which is becoming the next UFC champion.”

Lemos knows that beating Andrade is a great way to expedite her opportunity to make her dreams a reality, but she’s also aware it’s going to take an emphatic performance, which she intends to deliver.

“Defeating Jessica would be a great achievement; a step towards my ultimate goal,” she said when asked about this weekend’s main event matchup. “As I had previously mentioned, I don’t like to let a fight go to the judges’ scorecards for a decision, so my focus is to win the fight before the fifth round.”

And if that should happen, there is only one thing Lemos believes could be next for her.

“I truly believe I would be granted a title shot,” she said. “I will definitely compete for the UFC belt.”