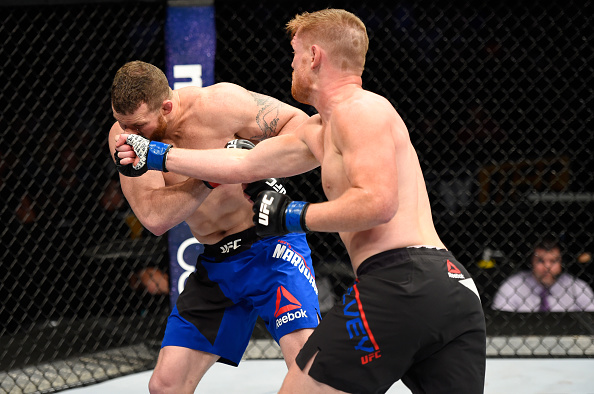 Much of the first three minutes were spent against the fence, as they two battled for position. After the action stalled, referee Herb Dean restarted the fighters, but neither took too many chances the rest of the way, outside of a late flurry of activity by Alvey just before the horn.

Marquardt began landing early in round two, prompting Alvey to do the same in the second minute before the two clinched again. With 2:14 remaining, Alvey scored a flash knockdown, and while he didn’t immediately follow up, his left hand began finding its mark regularly, and Marquardt’s left eye was showing the effects of it.

Marquardt switched things up in the third round, taking Alvey to the mat, where he took his foe’s back. Midway through the frame though, Alvey exploded out of trouble and back to his feet, where the bout stayed until the final five minutes had ticked away.

In a meeting of top ten bantamweights, Raphael Assuncao got back in the win column with a close split decision victory over New York’s Aljamain Sterling. 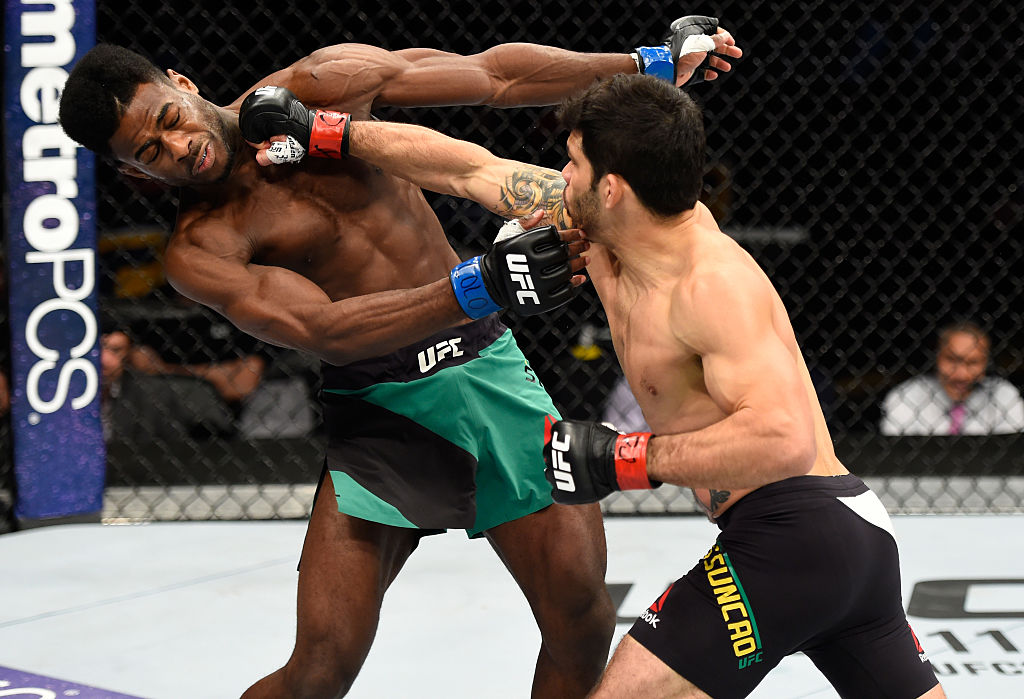 The first round was largely tactical, with Sterling busier thanks to a steady stream of leg kicks. But Assuncao did land a couple hard punches that, in a close round, could have gotten the judges on his side.

It was more of the same in the second, and the fans weren’t happy about the lack of action, as neither fighter was willing to kick things into a second gear. In the third though, it was Sterling starting to put his foot on the gas, but it wasn’t enough to pull the fight out on the scorecards, as the Brazilian was able to eke out the win.

Debuting Detroit welterweight Bobby Nash acquitted himself well in his first Octagon bout, but the right hand of Li Jingliang proved to be too much, as the Chinese veteran won their bout via second round knockout.

After the two traded punches early, Jingliang prompted Nash to go back to his wrestling midway through the round after jarring the newcomer twice with right hands. Nash’s takedowns came up empty, but a left hook put him back in business, leading to a near submission finish of Jingliang. The Beijing native was able to shake off the choke, but he remained grounded until the horn.

Nash came out firing bombs to start round two, and he quickly jarred Jingliang with a left, and followed up with a big right in the second minute. Jingliang countered with a right of his own, and a momentarily wobbly Nash sought a takedown. Jingliang’s clinch defense was solid, and he nearly scored his own takedown with a minute left. But it was going to be striking that won the battle, as Jingliang staggered Nash with another right hand and then finished him with two more, referee Adam Martinez stepping in to halt the bout at the 4:45 mark.

In the second minute of the fight, Johnson smoothly got the fight to the mat, and he went to work, locking in an anaconda choke. After de Silva was able to stay out of trouble, Johnson released the hold and the two rose. Johnson continued to control the action while standing, and in the final minute, he was able to put da Silva on his back, putting a stamp on an impressive first round.

Da Silva (12-2) came out fast for round two, but his aggressiveness led to another Johnson takedown and the San Diegan kept his foe grounded for much of the round, with only a hard knee from da Silva once the two rose in the final minute getting the Brazilian back on the board.

Johnson had another dominant frame in the third, as da Silva just couldn’t get a read on what the newcomer was throwing at him on the feet and the mat, making it a clear decision victory for the unbeaten Californian.

Former Ultimate Fighter competitor Eric Spicely continued to show off a dangerous submission game, picking up his second tap out in a row with a first-round finish of Rome’s Alessio Di Chirico.

The bout got to the mat in the second minute, Spicely leading, but Di Chirico ending in the top position. That didn’t stop Spicely though, as he slapped on a triangle choke, and moments later, the Italian was forced to tap out. The official time of the finish was 2:14 of round one.

After a measured start to the bout from both men, Kimball slipped to the mat as the first round approached the midway point. Seizing the opportunity, de Lima caught his foe with a grazing right hand on the way down, and he kept the punches flowing as Kimball tried to cover up, but after a series of unanswered blows, referee Adam Martinez intervened, stopping the bout 2:27 into the opening round.

With the win, Sao Paulo’s de Lima, who came in overweight for the bout at 209.5 pounds, moves to 15-5-1. Colorado Springs’ Kimball, a late replacement for John Phillips, falls to 14-6. 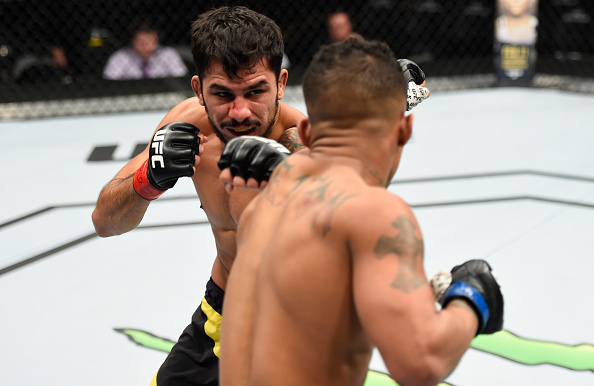 Flyweights Alexandre Pantoja and Eric Shelton earned spots in the UFC thanks to their performances on The Ultimate Fighter 24, and they justified that call in their Octagon debut, putting on an exciting three rounder won by Pantoja via split decision.

Shelton (10-3) got the fight to the mat immediately, but Pantoja (17-2) didn’t waste any time getting back to his feet. While standing, the faster Shelton held the edge, but Pantoja evened the score with a takedown, and on the mat he took his foe’s back. Shelton patiently waited out the bad position, and when he got his chance, he rose to his feet, ending the round with two more takedowns.

Shelton kept pressing for the takedown in the second, but Pantoja’s defense largely kept him at bay, and late in the round, it was the Brazilian who got the bout to the mat and nearly finished the bout with a rear naked choke attempt. Shelton wasn’t about to give in though, and he got out of trouble before the frame ended.

The altitude and fast pace finally hit both fighters in the third, and while it appeared that Shelton was the busier of the two, Pantoja did enough to pick up the hard fought decision by scores of 29-28 twice and 28-29.

TUF 22 alumnus Jason Gonzalez picked up his first UFC victory in his second try, finishing JC Cottrell via submission in round one of their lightweight bout.

Both fighters got in some sharp strikes in the opening minute, but it was an uppercut by Gonzalez that rocked Cottrell and prompted the Oklahoma City product to seek – and get – a takedown. Cottrell held the top position, but Gonzalez stayed busy from his back, and when the two scrambled back to their feet, Gonzalez smoothly locked in a D’Arce choke, forcing Cottrell to tap out at 3:54 of the first round.