Alves Still Packing Some Tricks Up His Sleeve

"I have a lot of respect for Kampmann, but once we close that cage, it’s gonna be all about me and I’m gonna break him." - Thiago Alves 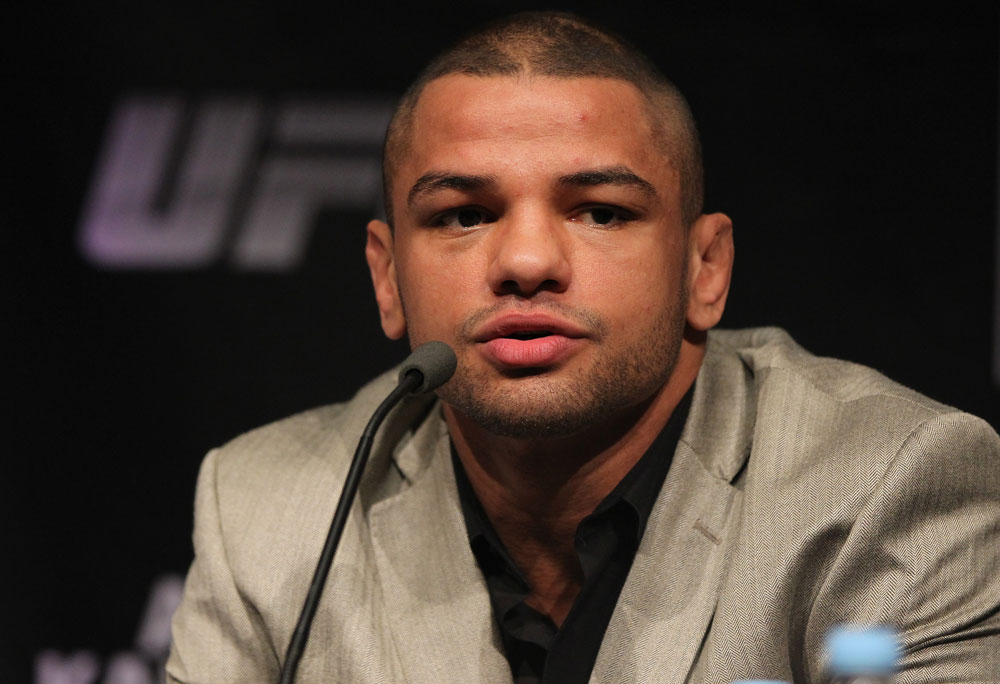 Long respected as one of the top welterweights in the game, Thiago Alves had nonetheless got himself into a rut. And at 170 pounds in the UFC, if you’re in a rut, that’s like blood in the water for the sharks that occupy the division.

So almost in the blink of an eye, a seven fight win streak that included wins over Chris Lytle, Karo Parisyan, Matt Hughes, and Josh Koscheck turned into a stretch where the “Pitbull” lost three of four bouts, making his UFC 138 match with unbeaten Papy Abedi last November a must win.

And Alves pulled off the victory, but more impressive than the notch in his win column was the way he won, by using his stellar striking game to set up a rear naked choke submission, the first tap out victory in a career that began in 2001.

“I’m always trying to improve, and that’s the goal in my camp at American Top Team,” said Alves. “We all try to get better and better. Before, a lot of people saw me as one-dimensional, but it was just easier for me to keep the fight standing because that’s where I’m comfortable and where I’m best at. I never really wanted to take the fight to the ground. But I’m very comfortable wherever the fight takes place, and you’re definitely gonna see a very, very dangerous “Pitbull” this time, even more than in the last few times.”

Admitting that he needs to be “open to doing new things,” Alves, still just 28 years old, looked like a new man in the Abedi fight, and he sounds like one leading into his main event bout tonight against Martin Kampmann. What a difference a big win makes, and having that victory propel you into a main event can do even more wonders for your psyche.

“If you said you don’t like it, you’re probably lying,” laughed Alves when asked about being in the UFC on FX main event. “It’s always good to be recognized for your work, and it’s a great opportunity for both of us to headline this show. I’m very excited, I prepared myself very well for this fight, and I’m gonna put on a great performance for the fans and for the UFC.”

Alves has apparently put his weight issues behind him as well, as he clocked in at 170.5 for his bout, a half-pound under the allotted limit. It’s actually gotten to the point where entire articles don’t have to focus on what he weighs, and more on what he’s planning to do on fight night, not a small thing when the last few years have seen the Brazilian besieged by queries about his weight.

“When you work with (diet and conditioning guru) Mike Dolce, you’re gonna be on weight and you’re gonna come prepared to fight the next day,” he said. “I knew it wasn’t gonna be overnight; it was gonna take a few fights to prove to everyone that I’m doing this serious now and that nobody’s gonna stop me. So it feels great, and the weight is never gonna be an issue again.”

What will be an issue is the man standing across from him in the Octagon tonight, fellow contender Martin Kampmann. Running an almost parallel course as Alves over the years, it’s surprising that the two have never met before, but this compelling showdown has finally arrived, and it’s not one that’s coming as a shock to the “Pitbull.”

“I’ve definitely been watching Kampmann for a while,” said Alves. “I love his style, I love the way that he fights, I think it’s the perfect matchup for both of us, and I think the best fighter and the most prepared fighter is gonna win, and that’s me.”

Kampmann feels the same way, only with the final result being him with his hand raised. Yet what makes this fight interesting isn’t each man’s high confidence level, but the different tools that each brings to the table. Alves is an aggressive Muay Thai striker with knockout power and the desire to lead. As for Kampmann, “He’s very dangerous everywhere,” said Alves. “He’s a great striker, he’s got Greco and wrestling skills, and also great submission skills, so he’s very dangerous, but I’m very prepared for wherever the fight takes place. I have a lot of respect for Kampmann, but once we close that cage, it’s gonna be all about me and I’m gonna break him.”

Alves may be counting on the possibility that Kampmann, who came up on the short end of two controversial decisions against Diego Sanchez and Jake Shields, gets a little overaggressive in an attempt to finish and leaves himself open for an Alves punch, kick, or knee.

“Whenever you come to fight, you know you’re gonna take risks, and I’m always gonna fight and always gonna push forward, so I’m definitely gonna put myself in a position to finish him,” he admits. “But when you do that, you’ve got to be very careful to not overcommit and not open yourself to get finished. But that’s what we train for and that’s what the fight game is all about, so if he slips, I’m gonna catch him.”

Maybe without a strike but with one of his new submissions? Maybe a flying armbar?

“I don’t think so,” laughs Alves. “Maybe a flying triangle, but not a flying armbar.”