Alves Mind and Heart Are In The Right Place

“I let this stuff bother me for a long time,” he continued, “but now I have my mind and my heart in the right place and I’m doing what I love. Even the hardest parts like cutting weight have become easier.”
By E. Spencer Kyte • May. 8, 2019

Warlley Alves was supposed to be the next Brazilian contender.

After earning his way on Season 3 of The Ultimate Fighter: Brazil, it quickly became apparent that the young prospect from Minas Gerais had a world of potential. Selected with the fifth pick in the middleweight bracket, Alves’ coach on the show, Chael Sonnen, raved about his charge, who won each of his bouts to advance to the finals.

Though it took a little longer, Alves continued his dominant run by choking out Team Sonnen teammate Marcio Alexandre Junior in the third round to join the fraternity of Ultimate Fighter winners and establish himself as one to watch going forward. He declared after the victory that he would relocate to the welterweight ranks, and upon arriving in the 170-pound weight class, Alves continued to impress. 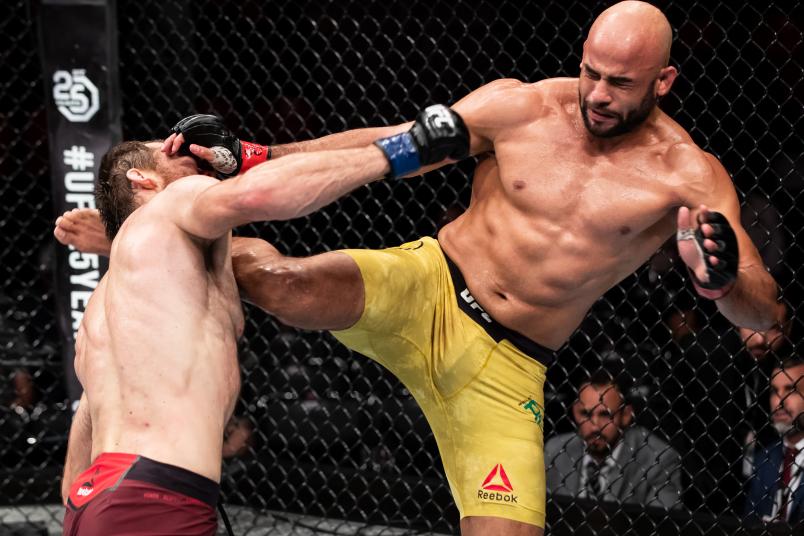 RIO DE JANEIRO, BRAZIL - MAY 12: Warlley Alves ( R) of Brazil kicks Sultan Aliev of Russia in their welterweight bout during the UFC 224 event at Jeunesse Arena on May 12, 2018 in Rio de Janeiro, Brazil. (Photo by Buda Mendes/Zuffa LLC/Zuffa LLC)

RIO DE JANEIRO, BRAZIL - MAY 12: Warlley Alves ( R) of Brazil kicks Sultan Aliev of Russia in their welterweight bout during the UFC 224 event at Jeunesse Arena on May 12, 2018 in Rio de Janeiro, Brazil. (Photo by Buda Mendes/Zuffa LLC/Zuffa LLC)

Wins over Alan Jouban, Nordine Taleb and Colby Covington followed, pushing his record to 11-0 while carrying him to the brink of contention and putting him in a position to compete alongside some of the most established and decorated Brazilian fighters on the roster at UFC 198 in Curitiba. But rather than his main card opener against Bryan Barberena serving as his coming out party, Alves became the first Brazilian to lose to a non-Brazilian fighter that night, landing on the wrong side of three 29-28 scorecards against the durable, underrated American.

It has been a mixed bag of results since then, as he followed up his first professional loss with a second straight defeat, getting steamrolled by current welterweight champion Kamaru Usman before collecting a pair of victories. Just when it seemed like everything was starting to round back into shape, Alves got picked apart and finished by James Krause last summer in Boise, walking into a well-timed knee to the chin midway through the middle round.

Five years after arriving in the UFC as an unbeaten fighter with an abundance of potential and projected as a future contender, Alves remains a bit of an enigma — a clearly talented fighter whose flashes of brilliance always seem to have a confounding, lackluster accompaniment.

“Pressure is normal; it’s part of the job,” said Alves when asked how his success on The Ultimate Fighter and early triumphs impacted his efforts in recent years. “We’re here to fight, but sometimes other things outside of the Octagon have an impact on our performances.

“I let this stuff bother me for a long time,” he continued, “but now I have my mind and my heart in the right place and I’m doing what I love. Even the hardest parts like cutting weight have become easier.”

One of the pieces that often gets lost or forgotten when assessing potential rising stars and projecting where their talents may take them is how young and inexperienced these competitors often are, both inside and outside of the cage.

It takes time to adjust to the spotlight and get acclimated to the rigors of competing on the biggest stage in the sport, fighting against more seasoned, more polished professionals who have already sanded down the rough edges and have their preparation dialed in. Even if the physical gifts are there, the mental side of the sport is arguably even more important and is often the final piece that young fighters are able to get squared away.

Alves’ run inside the Octagon reflects an athlete going through that battle, as he’s amassed a respectable 6-3 record that includes victories over a pair of divisional mainstays and the current No. 2 contender, but also features losses to less athletic, less explosive fighters like Barberena and Krause, as well as the reigning champion.

But as he readies to step into the cage against fellow Brazilian Sergio Moraes this weekend in Rio de Janeiro, Alves believes he’s sorted out the issues that have plagued him over the last several years and is focused on getting himself back into the thick of the title chase in the welterweight division.

“Today I have the emotional intelligence to separate and balance things out,” said Alves regarding the distractions that have pulled his focus away from preparation in the past and hampered his performance in the cage on fight night. “Before, I would let external situations interfere with my performance inside the Octagon, but not anymore.

“I know that being calm and handling my business in the cage go hand-in-hand, but that is only something you figure out in time. This is my 10th UFC fight and I learned that the hard way by suffering some losses, but I took good things from every experience and am ready to move forward again.

“This is a fight that will put me back in the mix,” he said of this weekend’s bout with Moraes. “He is a very tough guy — he’s coming off a loss, but has been putting on great performances of late. A win here is very important.” 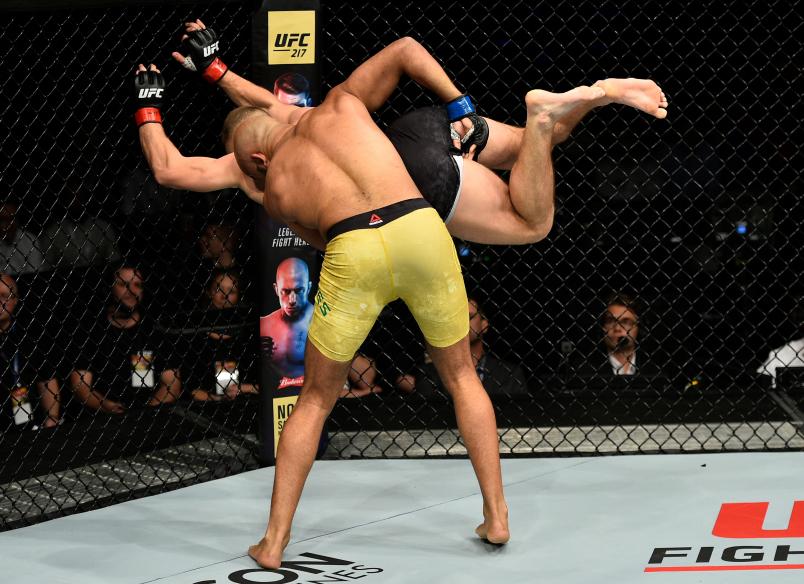 His assessment of Moraes is apt, if not understated, as the perpetually smiling 36-year-old has gone 8-2-1 in 11 bouts since losing his UFC debut to Cezar “Mutante” Ferreira nearly seven years ago. Prior to his loss to Anthony Rocco Martin in Wichita, Kansas earlier this year, the only man to best “The Panther” was Usman, who scored his one and only knockout victory inside the Octagon against the world champion grappler in September 2017.

While Alves has exhibited a nasty guillotine choke and a solid base on the ground, he’d be at a disadvantage on the canvas against Moraes, the same way the veteran has shown improved striking and a greater willingness to stand in recent years, but is likely out-gunned if he opts to engage in a kickboxing match on Saturday.

As such, this early card battle between dueling Brazilians shapes up to be a classic clash of styles, one that Alves is confident he’ll win.

“I’ll try to keep him standing and force him to strike as much as I can, but if it goes to the ground, I’m prepared for that too,” he said, offering his assessment of the contest. “Fighting is something you can’t predict, which is another mistake I made in some of my previous fights: I would try to predict how things were going to go and it would make me lose focus.