Alvarez's attitude the reason behind his success 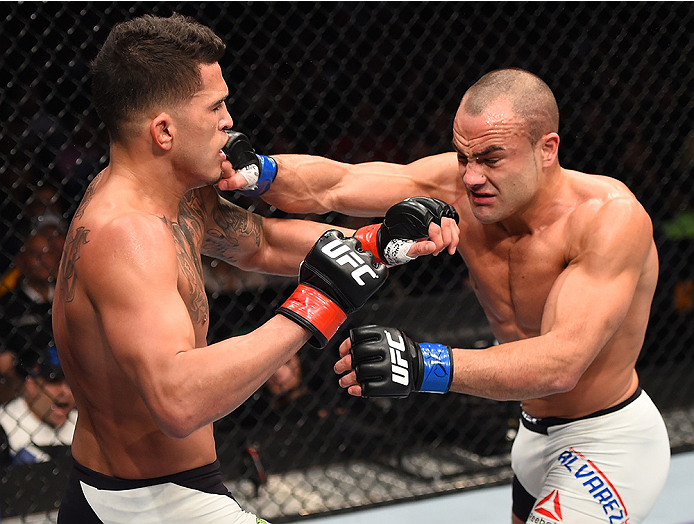 Eddie Alvarez’ greatest attribute in a fight isn’t his punching power or his wrestling. It’s not his steel chin or his will to win. Instead, the 32-year-old from Philadelphia will tell you that in a fight, it’s his attitude that breaks his opponents. But as he explains, that’s not something you can teach or learn. It’s either in you or it’s not, and the place it comes from isn’t pretty.

“It’s not just about how you fight, but about the way you live your life,” Alvarez said as he prepares to challenge Rafael dos Anjos for the UFC lightweight title on July 7. “It’s important to have this attitude of just never giving up and never quitting. And I think it’s an east coast thing because here, things aren’t easy. We have to work for every single thing we’re given, and if you don’t work, you might end up in a terrible situation.”

Hailing from the Kensington neighborhood in North Philly, one of the most dangerous in the City of Brotherly Love, the Irish-Puerto Rican kid came up hard and he never lost that idea that to get something, anything, you had to work harder than the next guy to get it.
RELATED CONTENT: Inside the matchup - Dos Anjos vs Alvarez | Alvarez loves being the underdog | Joe Rogan previews the fight

“In my life, I didn’t start in the best position,” Alvarez said. “I started my life scraping and crawling and not having a lot. So I’m used to terrible situations. I’m not a stranger to not getting what I want and being told “no” and being rejected. I’m not a stranger to that. So I think throughout my life, I learned how to deal with it and deal with it properly, and I have no issue with it. I have no issue being put on my head and being slammed down and punched. I have no issue with it at all. I welcome it because I look at it as an opportunity to overcome it, make people excited, and do something great.”

By this time next week, Alvarez could have a UFC championship belt sitting in his home. It’s a symbol of greatness, that for one night, he was the best 155-pound prizefighter in the world. To be even greater, a fighter has to hold that title, taking on all comers and beating them. That’s the long-term goal. The short-term one is beating Brazil’s dos Anjos, a fighter who is no stranger to hard times and adversity in his own right. Now, after upsetting Anthony Pettis and successfully defending his title once against Donald Cerrone, dos Anjos is looking to settle into his own long reign. It’s Alvarez’ job to stop him, and while he is respectful of the fighter and the man he will be facing, he isn’t losing sight of that job.

“It takes a special person to get that UFC title,” Alvarez said of his foe. “Not just anyone can win that. It takes a special person to be the number one guy in the division and go out there and perform at a top level the way he has. And I have a great respect for the guy. Not only what he does inside the cage, but he’s a father outside and a man of God and I respect the life that he lives, and not just how he fights. How he carries himself outside the cage is important and it often is a good detector of how you’re going to do inside the cage.

“So I have a lot of respect for the guy, I understand his strengths and how dangerous he can be, and I’m not ignorant to that. But I think, more than anything, I focused on my strengths and what I’m capable of, and I know, at the end of the day, I have the weapons and the strength and what it takes to beat anyone in this division and stay on top for a long time. This is the beginning of my time and the end of his.”

Confidence like that is not created in a fighter’s head. It’s created over years and years of work and results. At 25-7 as a pro, Alvarez has the results, and he’s also put in the work. But to get to that next level of confidence, he had to let go of any idea that he was in this alone. And with coach Mark Henry steering the ship and a team of stalwarts including Frankie Edgar, Edson Barboza and Marlon Moraes by his side, he was able to do that. The result was a disciplined, mature performance against Pettis in January that put him in position to fight for a title next week. 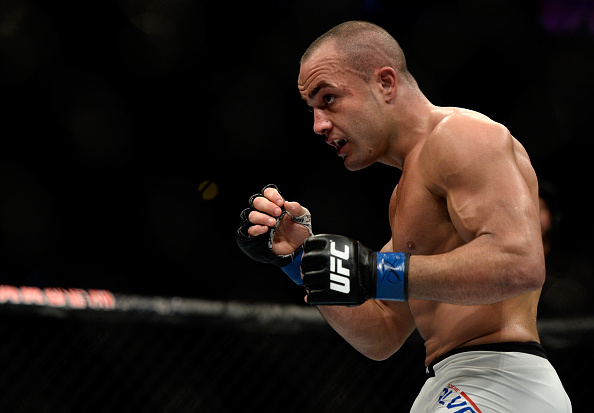 On Thursday, Eddie Alvarez steps into a professional fight for the 33rd time. He’s been at this for nearly 13 years, and he knows what it will mean for him to win a world championship. It will change his life and that of his family, and to have that kind of pressure has broken lesser men. Alvarez won’t be broken. So when he faces dos Anjos, just look for a smile.

“I would like to tell you that in my mind this is the greatest thing, but whenever that goes on in my head, I try to block it out because it doesn’t do well for performance to get those feelings or emotions involved and attached to the fight itself,” he said. “Just try to keep the fight a fight. It’s me and another guy, and it always is. It’s never anything more and it’s about going in there and dominating each guy one by one each fight at a time. You’ve got to be able to enjoy it.”