It took several years for Eddie Alvarez and Gilbert Melendez to finally meet in a fight, but only 15 minutes for them to settle their score at Arena Ciudad de Mexico Saturday night, with Alvarez fighting through a nearly closed left eye for two rounds en route to a split decision win in the UFC 188 co-main event.
> Order UFC 188 Replay
“I ended up blowing my nose and that’s what made my eye swell,” Alvarez said. “Once that happened in the first, that changed everything. I knew I had to adjust my game plan. I’m the kind of fighter who likes to stand and strike but that would have been dumb to do with the eye. I decided to really grind him and try to work him against the cage and the ground.”
> WATCH: Eddie Alvarez Backstage Interview | Octagon Interview 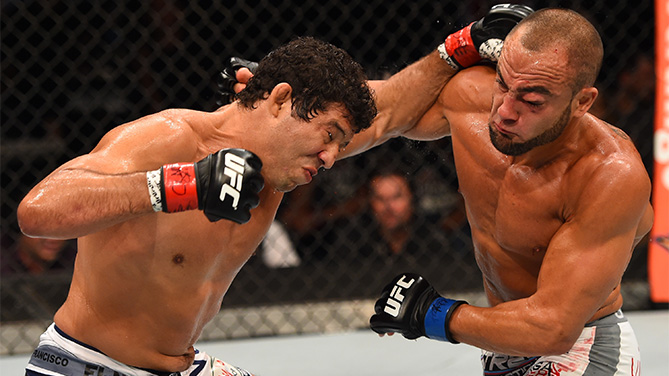 “I took my standard approach in the Octagon, didn’t back up,” Melendez said. “He was elusive though. I thought I did enough to win. (But) I lost that fight myself.”

The two lightweight standouts were long considered the best 155-pounders not signed to the UFC, but with both on the roster, the highly-anticipated grudge match came to fruition, and while not a striking-heavy barnburner, the bout certainly packed its share of drama. 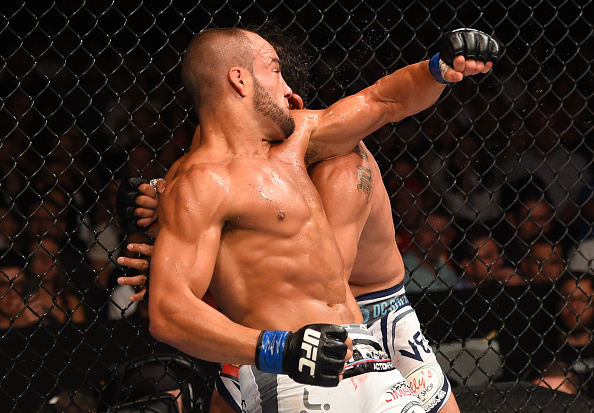 After a tentative opening, the two engaged in the second minute and it was Melendez cracking Alvarez with a hard right elbow that staggered the Philadelphian. Alvarez recovered quickly, and the war of nerves resumed, Melendez proving to be a little tighter with his shots during exchange, and while Alvarez got off a couple hard kicks before the end of the round, he went back to his corner with his left eye swollen nearly shut.

Alvarez showed more signs of life in the second, his kicks to the leg being a primary weapon. Melendez’ priority was to keep landing the right, but with Alvarez scoring a takedown in the final minute and landing a spinning elbow in the closing seconds, it was very conceivably a dead even fight.

Keeping the pressure high while trying to get the fight back to the mat, Alvarez pressed forward, but both fighters got in their share of shots while trying to hold back fatigue and surge ahead. Alvarez was able to get the bout to the mat twice, even though Melendez jumped up immediately. The second time up, Melendez took a big deep breath and went on the attack as Alvarez now sported a mouse under his right eye. It was gut check time, and both fighters were up for it, Alvarez landing a hard elbow and Melendez, now bloody, going for broke as well until the horn sounded.