Alvarez rocks RDA to claim title in 1st Round 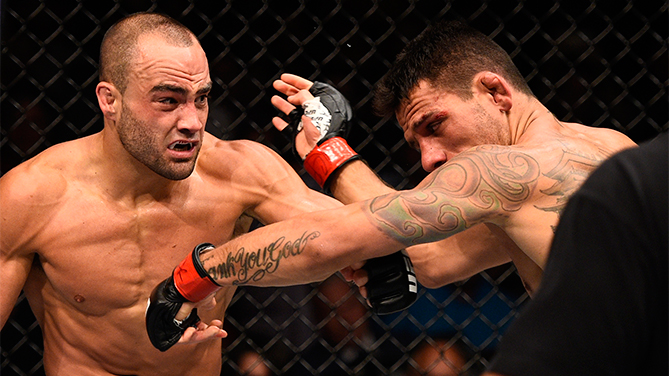 The epitome of a Philly fighter, Eddie Alvarez showed that toughness in his UFC Fight Night main event against Rafael Dos Anjos, walking through fire to stop the Brazilian in the first round at the MGM Grand Garden Arena Thursday night and win the UFC lightweight championship.

Dos Anjos, who was making the second defense of his title, found out pretty fast that this dog bites.

The champion’s striking attack was busy and effective at the start, keeping Alvarez from getting his own offense into gear. The Philadelphian quickly adjusted with what looked to be a solid takedown, but Dos Anjos easily eluded any danger and got to his feet. The Brazilian came up short with his own takedown, and moments later, a right hand staggered Dos Anjos and hurt him badly. Alvarez went all out in search of the finish as Dos Anjos tried to get his bearings back, and when Alvarez missed a flying knee and fell to the canvas, it looked like Dos Anjos had his chance to recover. But as the two stood, Alvarez remained relentless, firing off unanswered lefts and rights that prompted referee Herb Dean to step in at the 3:49 mark.

“He’s the champion,” Alvarez said. “Rafael is resilient and I had to empty the gas tank.”

Alvarez did. And it paid off. With championship gold.