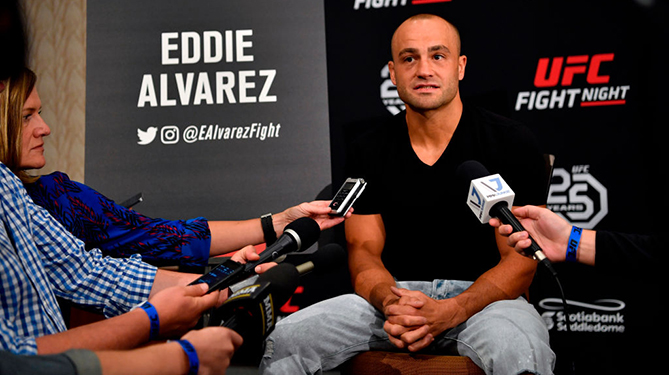 Eddie Alvarez interacts with the media during the UFC Fight Night Ultimate Media Day event at Hyatt Regency Calgary on July 26, 2018 in Calgary, Alberta, Canada. (Photo by Jeff Bottari/Zuffa LLC/Zuffa LLC via Getty Images)" align="center" />Eddie Alvarez has achieved a rare double play in that he’s a fighter’s fighter and a fan’s fighter. Usually, it’s either one or the other, with an athlete drawing admiration from his peers but drawing little elsewhere, while those praised by the fans are often looked down upon by the ones he or she shares the Octagon with.

Alvarez doesn’t have that problem. Sure, he’s “The Underground King,” but once he made it to the UFC, his cult hero status expanded to a much wider audience. As for the fighter’s fighter aspect, few break down the essence of the sport like the former UFC lightweight champion, and all it takes is a conversation with him to realize that.

“I think it’s just learned over time,” Alvarez said. “The more battles I’ve been in, the more I’ve learned. And I didn’t just fight. I sit back and I write about my fights. I write about what I did wrong, what I could have done better and I watch myself. By doing that, I learn a lot, not just about myself, but about the fight game, just paying attention to what’s going on. I’ve been fighting since 2003, and when you’ve been in that many fights, if you don’t learn anything then you’re just not paying attention.”

Since defeating Anthony Ladonna by knockout in December 2003, Alvarez has made the walk 34 more times, giving him more than enough knowledge to give a Master Class on Prizefighting. And despite all his success, the 34-year-old – who returns to the Octagon this Saturday to face Dustin Poirier in the UFC Calgary main event – never stops seeking knowledge. So on Sunday morning, win or lose, he will have the notepad app on his phone open and ready to recap the night before.

“Usually on the plane ride home, assuming that I’m not too beat up, I’ll write about the fight – how I felt about it, what I could do better,” he said. “I assess the fight as a whole and I assess my training camp. If there’s mistakes that were made, I make sure I write them down, and I try to forgive myself for anything that I did that I didn’t like. So all the feelings about the fight – good or bad - I try to get them out of the way before I land the next day and get myself home.”

Then it’s family time with his wife and kids until he heads back to the gym to aid his teammates, work on anything he needs to from the previous fight, and then start looking toward the next one.

After a stirring Fight of the Year candidate against Justin Gaethje in December, one that saw Alvarez score a third-round knockout, the Philadelphian wanted the winner of the April bout between Tony Ferguson and Khabib Nurmagomedov. That fight never happened, with Nurmagomedov defeating late replacement Al Iaquinta to win the UFC lightweight crown. That was still good news for Alvarez, who told me in March that he believes he has the style to unseat “The Eagle.”

“When I look at a guy who gave Khabib trouble in Gleison Tibau, I look at a very basic guy who has strong wrestling and is a very strong, athletic person,” he said. “I kind of look at a guy like myself a little. (Laughs) I think in this division, I’m the only guy who can beat Khabib. I don’t see any other really hard opponents for him.”

I also asked about a rematch with Poirier, who Alvarez engaged in a no contest with in May 2017, should “The Diamond” beat Gaethje, which he did.

RELATED: Alvarez: "Dustin no longer has a shot" | Calgary Fight by Fight Preview

“If the fans roar loud enough, then I gotta hear them, let’s put it that way. I’ve got my eyes peeled for all the top contenders and everybody who thinks they’re the best. They’re the guys I want to go after.”

So here we are. Alvarez didn’t get a shot at the new champ, but he will be fighting Poirier a second time. And that’s fine because the way he sees it, he’s giving the fans – and the UFC – exactly what they want.

“The UFC wanted it and, at the end of the day, I have a boss, just like the rest of these fighters do,” Alvarez said. “I could sit out and gripe and cry and say I’m not taking fights and do that. But I’m at the point in my career where I don’t want to do that. I don’t have tons of time to mess around and play games and negotiate things like that. I think all fans really want to see is the fight, so I’m just giving the fans what they want, giving the boss what he wants and putting on a helluva fight for the fans of Canada.”

Alvarez has always been an honest fighter. Is he also the last honest man in sports?