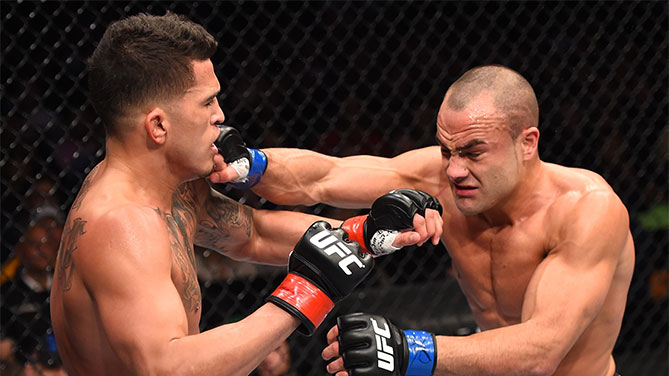 The victory prompted the number four-ranked Philadelphian, who has beaten Gilbert Melendez and Pettis in consecutive fights, to call for a title shot.

Alvarez opened the bout with a leg kick followed by a takedown, and he pinned Pettis to the fence. Pettis got up quickly, but remained locked up by Alvarez, who seemed to be trying to push the Milwaukee native through the fence. Pettis stayed cool under pressure, even when taken down a second time with a little over two minutes left. Again, Pettis got up and then broke loose, nearly catching Alvarez with a spinning kick before getting smothered against the fence. When Pettis broke free with a minute remaining, he began scoring with kicks to the body, allowing him to finish strong.

There was great back-and-forth action between the 155-pound standouts in the second round, and with Pettis able to avoid extended periods in the clutches of Alvarez, he was able to whip off even more kicks to the body throughout the frame. Alvarez got in his share of punches and kicks though, as he was showing off a complete MMA game.

Alvarez got a takedown in the second minute of the final round, a pivotal one considering the closeness of the fight. Alvarez fired away with strikes, but in the process allowed Pettis to rise to his feet. The Philadelphian dumped Pettis right back to the mat moments later, and though Pettis got up quicker the second time, he was kept against the fence by Alvarez. With 35 seconds left, Pettis got loose, and the two traded to the horn, finishing off the grueling bout. 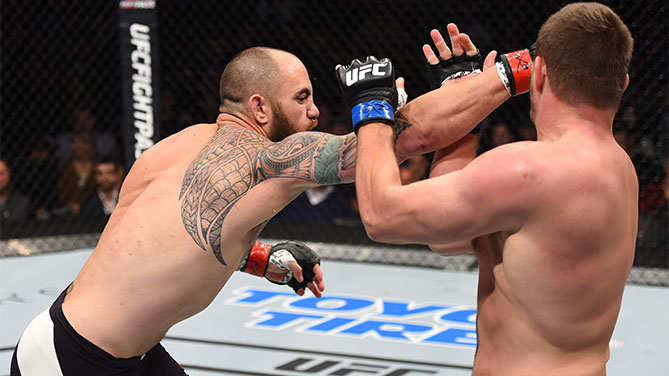 The expected fireworks between heavyweights Travis Browne and Matt Mitrione didn’t materialize, but the sixth-ranked Browne did get back in the win column for the first time since December of 2014, stopping Mitrione in the third round.

The action was tense in the early going, but neither man was able to score with anything notable. That changed in the second half of the round, as the two began exchanging at a greater frequency, each getting in a couple solid shots. In the closing seconds of the round, Mitrione took a finger to the eye, but he was cleared to continue.

Mitrione came out fast to start the second, and he landed with a couple hard punches that jarred Browne, but he took another poke to the eye, causing a second visit from the Octagonside physician. Once again, Mitrione was cleared and he insisted on continuing, so the bout resumed. Browne scored effectively with his kicks, and Mitrione stayed aggressive with his wild rushes at the Hawaiian. With a little over two minutes remaining, Browne tripped Mitrione to the mat and immediately began working for his foe’s arm. Mitrione got loose and then rose to his feet, Browne resuming his patient stand-up attack.

The third round started out slow, but Browne picked things up in the third minute with a huge slam, and he moved right into the mount position. Mitrione, his right eye rapidly swelling shut, tried to escape, but Browne’s ground-and-pound attack was too much, and at the 4:09 mark, referee Gary Forman stepped in and stopped the fight. 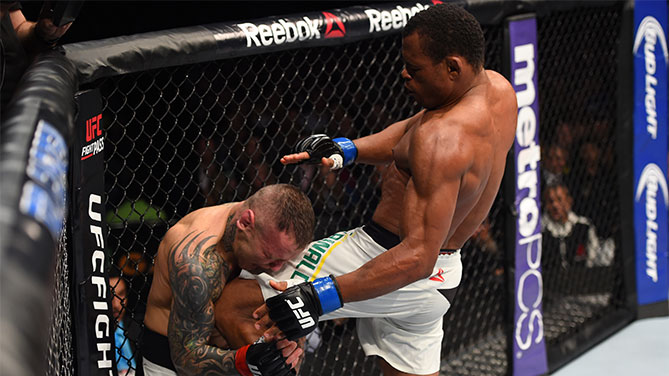 Francisco Trinaldo’s fifth consecutive win was his biggest to date, as he took a three-round unanimous decision over former Ultimate Fighter winner Ross Pearson in a bout that could propel the Brazilian into the lightweight top 15.

There was a lot of movement but precious little scoring for most of the opening round, as Pearson chased and Trinaldo looked to counter. But as the time ticked away, Trinaldo began landing with significant strikes – mainly kicks - and even slammed Pearson hard to the mat in the closing seconds.

After eating a few more kicks to begin round two, Pearson caught one and put Trinaldo on the mat. “Massaranduba” got back to his feet quickly and resumed his attack, scoring with kicks and knees as Pearson was unable to get into an offensive rhythm.

Pearson, as aggressive as he was at the start, scored with a head kick to begin round three, but Trinaldo flurried back, briefly jarring the Brit. Pearson was now cut over the left eye, yet he never stopped moving forward, and he landed with a few good shots. Midway through the round, Pearson caught a head kick and used it to score a takedown, but Trinaldo didn’t stay on the mat for long, and the two remained standing until the final horn.