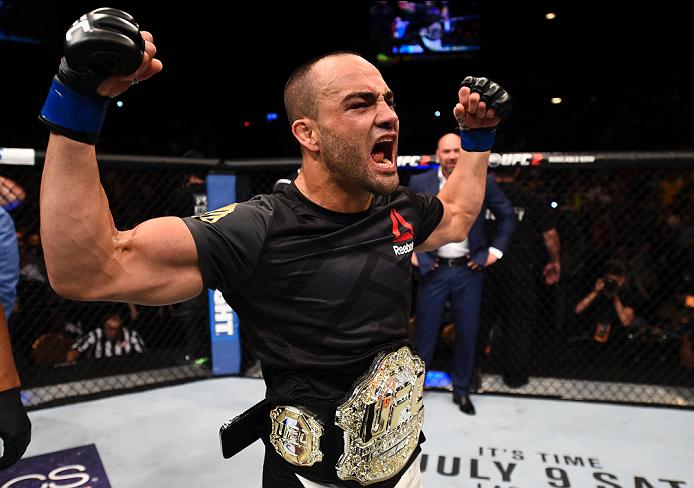 The fighter’s life isn’t easy. It may be even harder for the fighter’s wife. But Eddie Alvarez told his wife, Jamie, who he has known since he was 15 years old, that one day, all the struggles would be worth it.

That day was July 8, when Alvarez defeated Rafael Dos Anjos to win the UFC lightweight championship.

“The most important thing in bringing the belt home was I promised my wife that it would happen,” Alvarez said. “I promised her that a long time ago. I never told her when it would happen, but I told her it would. So I kept my promise to my wife. I told her the sacrifices we went through throughout this whole time would pay off and that this moment would happen.”

For those who have followed the sport for any amount of time, the question of Alvarez being crowned world champion wasn’t if, but when. The Philadelphian won wherever he strapped on the gloves, but after a loss in his long-awaited UFC debut against Donald Cerrone in September of 2014, questions arose.

He began to answer them with a win over Gilbert Melendez in June of last year, and a victory over former world champion Anthony Pettis in January silenced even more doubters. Yet while Alvarez was winning, he wasn’t winning like the Philly banger that tore up the non-UFC circuit. But if others lost faith, the 32-year-old didn’t. In fact, a union with Mark Henry and a gang of New Jersey stalwarts including Frankie Edgar, Edson Barboza and Marlon Moraes gave Alvarez even more confidence.

“Given my last two fights, I think people thought I was evolving in a way that was less exciting, boring, too efficient, and every other name you can think of,” he said. “A lot of people had a lot of things to say.”

Alvarez heard them all and remembered them all, but he didn’t let those words affect the task at hand once he signed to fight Dos Anjos in Las Vegas.

“I think being with Mark Henry these last six months and having him have me start punching again and start being offensive and throwing volume, and just tweaking defensive mistakes that I had, it’s night and day from when I started with him to where we are now. And it does nothing but excite to see how far we can get in the next six months. So I really owe it to him for putting the time in with me and being as emotionally invested as he was. It’s hard to find a partner as emotionally invested in the fight as you are, and I found that in Mark and my team and I owe a whole big chunk of it to them. I just showed up and listened.”

And marched forward. Dos Anjos looked sharp at the start, but for every fistic comment, Alvarez had a response, which was precisely the idea.

“The idea of the whole fight against a guy like him, he’s a momentum fighter,” he explained. “If you let him gain a small amount of momentum, let him hurt you and let him feel dominant, Dos Anjos can be a devastating person to deal with if you allow him to do that. So even giving him a small window to do that is very dangerous. So the idea was to go punch for punch, kick for kick, takedown for takedown and not allow him to gain the momentum that he’s usually able to gain. And it played out in our favor. We stayed right with him at the beginning of the race and then when I felt some small amount of weakness, we pounced.”
RELATED CONTENT: Alvarez featured in Thrill and Agony | Alvarez backstage after the win | Recap the victory

When Dos Anjos got rattled, Alvarez moved in for the finish, and just when he appeared to be on the verge of getting the stoppage, he attempted a flying knee that missed. It was shades of the Luke Rockhold-Chris Weidman fight all over again, as it looked like Alvarez had given the champion precious moments to recover.

“There was like a third of a second where I said, ‘That was a really stupid idea,’” he laughs. “And then I had to get my wits back and find out how to get out of there. Initially, I thought he was knocked out and he was just lying on top of me. I wasn’t sure if the knee landed or not. So I shoved him and he fell over and I knew at that point he was still kind of fuzzy, so I was able to continue the barrage and not let him get his bearings about him and finish the fight.” 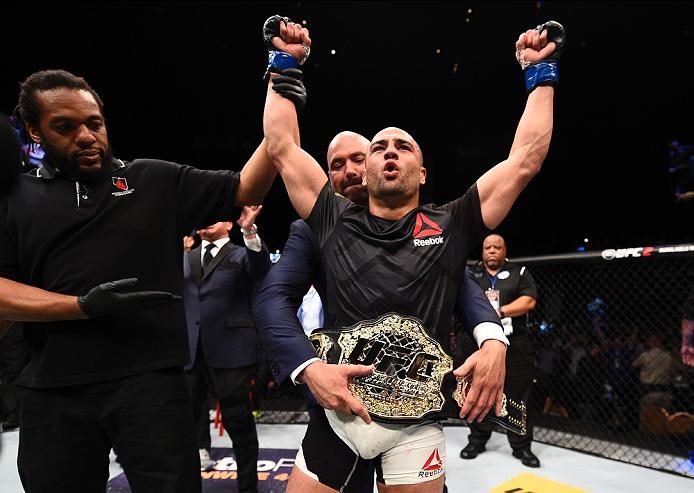 At 3:49 of the first round, Eddie Alvarez was the lightweight champion of the world. And while he might have a few days off to enjoy the summer with Jamie and their four children, he’s already thinking of what’s next.

“The world championship and the belt are in the past,” he said Thursday, less than a week after the biggest win of his career. “I woke up this morning, all the emotions are gone and I began thinking, ‘What do I have to do to improve?’ What do I have to do to grow? What do I have to do to continue to be dominant in my weight class?’ So removing the emotions and everything of winning the title, I understand that it’s just a temporary thing and that there’s some work to be done in order to hold on to this and be dominant. And that’s what’s on my mind right now. In my head, I have trouble resting, I have trouble being comfortable because a lot of my life is about sacrifice and being uncomfortable. So when I find comfort, it makes me uneasy sometimes and it makes me feel guilty. I have my troubles and issues with feeling comfortable and at ease.”

He has no issues with keeping promises though, and he kept his to his wife. But there are even more lessons to be taken from Alvarez’ win, and they have nothing to do with bigger paychecks or more fame and glory.

“I have three young boys and a baby girl that I raise and they mean everything to me,” Alvarez said. “And when I say something to them, when I tell them that nothing’s impossible and that if they just work hard and go after their passion, that no matter what struggles they go through, eventually they’ll get it if they keep trying, I don’t want them to think I’m full of s**t. I don’t want them to think I’m a dad who says stuff and doesn’t do it. So more than anything, this title, although I’m an adult and I understand that it’s just a byproduct of my hard work, it means something to my kids. So when they see it, they don’t just see a belt; they see that I’m not full of s**t and I’m their dad, who’s willing to not just say it, but go ahead and do it.”