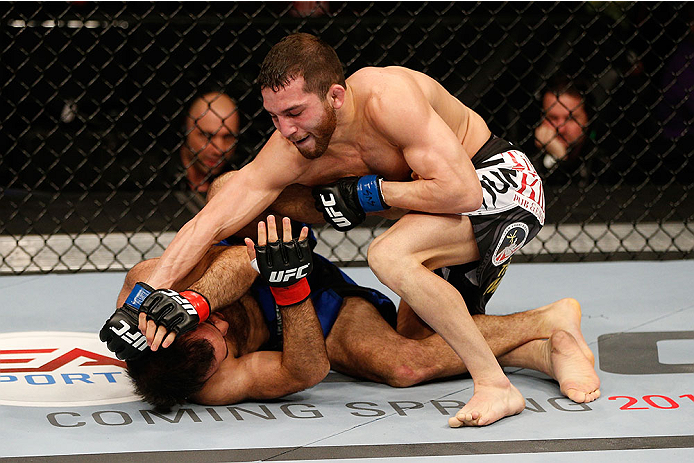 While he admits there are still elements in his game that are developing, Alptekin Ozkilic is also quick to guarantee that the process is worth paying attention to. The scrappy flyweight believes he is coming into his own competing at the highest level of mixed martial arts, and his enthusiasm for the road ahead is right on par with the tenacity he’s proven capable of producing inside the Octagon on fight night.

Even with suffering setbacks and knocks along the way in the early goings of his time under the UFC banner, the man Bruce Buffer announces as “Turkish Delight” operates with a confidence that hasn’t been faded in the slightest regardless of the outcome of the bout. The self-described soccer and techno music-loving former wrestler turned mixed martial artist is living his dream, and is determined to make sure that will continue to be the case for years to come.

“It’s definitely a dream come true being in the UFC,” Ozkilic said. “Who wouldn’t want to be in the best organization in the world? I think I’ve adjusted pretty well going up higher in competition. I’ve competed at the highest level in wrestling so I’m used to the pressure at the highest levels. I definitely belong on the biggest stage.”

And even though victory has eluded him in his two most recent outings, Ozkilic isn’t one to hang his head in a negative space. The 29-year-old Istanbul native has the ability to appreciate the educational elements he’s experienced competing in the UFC, but his love for the ruckus that comes when throwing down with a game opponent is still the driving force.

He simply loves to scrap, and his affinity for mixing it up has certainly shown through during his time competing in the UFC.

“I love being a fan favorite,” Ozkilic said. “People still message me and tell me they appreciate my fight against [John] Lineker because I entertained them and they got their money’s worth. People look forward to our fights and want to be entertained. I am an entertainer. As long as I’m making fans happy, I’m winning. That means a lot to me. Not even just that, but I love getting into fights. I get in there to fight and not hug anyone or stall. That’s my mentality. I’m going to throw down and satisfy myself, first of all. Some guys don’t feel comfortable getting hit and maybe that’s why they play it safe. Well pick a different job. It’s not the WWE.

“Unfortunately people don’t realize I stepped back into the cage one month after my debut,” he added in regard to the learning curve he’s experienced thus far in the UFC. “It was so hard on my body. I did good in the first round but then my body broke down and I couldn’t press the rest of the fight. Clearly my opponent couldn’t do anything to finish me even though I was dead. That’s how tough I am. My last fight was against one of the best guys in the division and I gave him the best fight amongst all the other flyweights. I already proved I belong in there with the best early in my career.”

Ozkilic is hungry to get things back on track and he’ll get the opportunity to do just that when he faces promotional newcomer Ben Nguyen this Saturday at Fight Night: Miocic vs.Hunt in Adelaide, Australia. Ozkilic knows he has a style the UFC’s passionate fan base appreciates, but he has bigger career goals in mind than just being entertaining when the Octagon door closes. That said, he needs to get back into the win column in a big way, and that’s exactly what he intends to do on Saturday.

“A win in this fight is definitely going to bring my confidence back and I’ll be more positive toward a lot of things. I want to stay more active and fight at least two or three more times this year. Australia is beautiful and I want to come back for the Melbourne card in November.

“I definitely have a tough task ahead of me,” he added in regard to facing Nguyen on Saturday. “I don’t expect an easy fight. I’ve seen his famous staredown and quick win before he got signed. He looks like one of those guys who just comes to fight and I respect that. I don’t take him lightly. I need to get an impressive win here. It’s a good matchup for me and I don’t think he’s fought anyone of my caliber.”

While Ozkilic is determined to obtain success on Saturday night, his overall vision for what is possible competing at the highest level of the sport goes far beyond just wins and losses. With the UFC’s global push in full swing, he sees tremendous potential to become a fixture in the promotion’s international expansion, and has his sights set on becoming a fighter the promotion can turn to when cards in new markets need athletes who are guaranteed to deliver.

There is one market in particular Ozkilic would love to be involved in and that’s his home country of Turkey. Should the UFC ever decide to touch down in Istanbul or one of the other major cities in his native land, Ozkilic not only wants to have a place on the lineup, but he would love to be front and center leading the charge into what he believes is a huge market just waiting for the biggest show in MMA to arrive.

Furthermore, Ozkilic not only feels he’s the right man for that specific job, but is also the right man to bring the flyweight division to a new level of respect and visibility. Those are undoubtedly lofty ambitions, but there is no shortage of charisma and drive where Ozkilic is concerned.

“The problem with our division is we are lacking personalities,” Ozkilic said. “There is no charisma in the division. I think I am what the flyweight division needs. I know I am a colorful character. I’m presentable and marketable and if given the opportunity I know I can build a great fan base. There are Turkish UFC fans all over the world. Once you promote me, trust me, you can have me fight in Germany to Australia and I will sell tickets. I love representing and showing my Turkish roots. I hope to be an ambassador for my culture as I progress in the sport.

“There is also a huge market in Turkey. My dream is to bring the UFC to Turkey one day and be the main event. I know it’s my job to win fights, but I need that opportunity to promote myself more. I don’t get much opportunity from the media. Everybody is focused on certain people. I do my best to self-promote but not enough. I have to worry about training not social media. As of now I need to focus on my next fight, win and keep winning.”