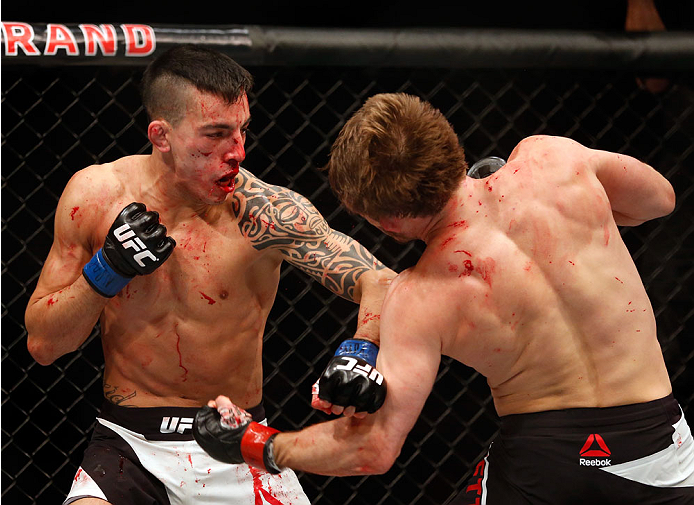 Though his 20-0 professional MMA record might say otherwise, Thomas Almeida has not always been perfect. Then again, ask him the last time he lost at anything and he laughs.

“I hate to lose,” the 24-year-old said. “I always try to win.  Yes, I lose in things, but they’re things I do not focus on.  Everyone wants to win, but to win you have to train hard.  I am willing to focus and train hard so I can keep winning at MMA.”

Has it been so long that he’s forgotten what it feels like to not be the victor in something? Maybe, but when pressed, he’ll come up with something – with a qualifier of course.

“I am very competitive at everything,” Almeida admits. “But MMA is my focus, and I train hard every day, so I can be champion some day.  If I lose a game of chess, I am upset, but it’s not like I have been training every day to win a game of chess.”

Good point, and while mixed martial arts has been described in the past as kinetic chess, Almeida’s Chute Boxe-created blitzes in the Octagon don’t exactly bring to mind visions of Bobby Fischer and Boris Spassky battling it out. Then again, given the results he’s compiled thus far, if Almeida is playing chess, everyone else has been playing checkers.

And he refuses to chalk his success up to being younger, stronger and faster than his opponents, or having more power in his fists and feet than they do. All of that helps, but he believes his results come from a style he is working on perfecting in the gym. In his eyes, nothing is left up to chance, even if wins over Timmy Gorman and Brad Pickett had their share of chaotic moments. So don’t call him a brawler.

“I like to finish my fights; I do not see myself as a brawler,” he said. “I am very aggressive, and if I see a chance of finishing my opponent, I will do it.”

19 times in 20 fights he saw that chance and took it, with only Gorman lasting three rounds with the southpaw slayer. That kind of finishing ability, coupled with his Chute Boxe pedigree and unbeaten record, have fans predicting a lot more for “Thominhas” than his current number eight ranking at 135 pounds, but he’s not rushing anything.

“The only person I am focused on is Anthony Birchak; I take it one fight at a time.”

It’s not a statement that will light up social media, but that’s almost the point. He has a fight coming up this Saturday in his hometown of Sao Paulo with a tough opponent in Birchak, and without another win, talk of title shots in 2016 is just that - talk. That doesn’t mean Almeida won’t be watching January’s showdown between champion TJ Dillashaw and former champ Dominick Cruz, but his response isn’t that of someone who may fight the winner down the line; it’s a fan’s response.

“I am very interested in this fight,” Almeida said. “These two champions will make a great fight.”

You get the feeling Thomas Almeida will make a great fight in a championship bout one day as well. It’s just not today, and he wants the world to remember that.

“I am focused on Anthony Birchak first, and then I can think of 2016.”