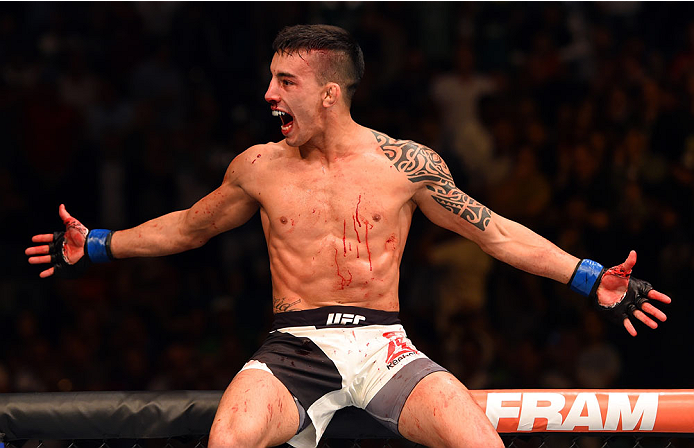 The shine of championship belts and the spotlight that comes with main event assignments on massive stages usually dictates which fighters end up at the top of the annual “Best of” lists that come out around this time of year. It’s totally understandable, as championship fights come with more pressure, more attention and more rounds against established, elite competitors, and emerging victorious in a couple or three title bouts over a 12-month stretch merits recognition and a place in the “Fighter of the Year” conversation.

It also means that there is very little room left in those collections for title contenders and rising stars – the emerging class that has done impressive things in the Octagon during that same stretch of time and could find themselves in one of those high profile championship pairings in a year’s time if their successes of 2015 carry over into the New Year.

One fighter in that exact position is Thomas Almeida, the 24-year-old Brazilian bantamweight who collected three victories last year to vault into the Top 10 and position himself as one of the top young stars in the UFC. Each win came with a step up in competition and was accompanied by a Performance of the Night bonus, as Almeida’s finishes of Yves Jabouin, Brad Pickett and Anthony Birchak were all of the “make you jump up out of your seat” variety.

While end-of-year accolades are nice, Almeida will always reflect on 2015 as the year he was able to make two of his fighting goals come true and continue working towards achieving the biggest goal of them all: winning the UFC bantamweight title.

“I can’t even put it into words,” the young Brazilian said of getting the opportunity to fight in his hometown of Sao Paulo, where he defeated Birchak in November. “It’s an experience that I’m always going to remember and especially with the outcome of the fight. Having my friends, family, everyone there – it was a great moment.”

That bout followed his blistering second-round knockout win over Pickett at UFC 189 in Las Vegas, which was another city on the Brazilian finisher’s bucket list of places he would like to compete and an assignment location he requested after marching into Montreal and stopping Jabouin inside the Bell Centre in April.

Stacking victories and collecting bonus checks is usually a quick way to put yourself in the title conversation, but with the Dillashaw-Cruz-Faber triumvirate taking shots at one another atop the division right now as the first two in that trio prepare to face off next week in Boston, there is a strong likelihood that Almeida still has a little more work to do before getting a chance to cross the ultimate goal off his fighting “to do” list.

And that’s perfectly fine with the humble fighter with the 21-0 record and penchant for settling opponents in spectacular fashion.

“I’d rather take it step-by-step,” Almeida said of his climb to the top of the division, suggesting that he’d like to return to the cage in March against whomever the UFC wanted to match him up against. “I’ve been working for a long time to get here, but my goal is to be No. 1 in the division, so I don’t think I’m done; I think I have to work more to get there.”

Which is where all that bonus money that Almeida has been accumulating since debuting in the Octagon with a unanimous decision win over Tim Gorman in a bout that earned Fight of the Night honors comes in handy.

While he has used some of that additional income to aid his family and make their lives better, the 24-year-old with championship dreams has reinvested the majority of that money into his career, recognizing that the competition is only going to keep getting harder and that it will take more than his penchant for landing devastating blows in entertaining fights to carry him to the heights he hopes to reach in 2016.

“With part of the money, I helped my family, but the big part of the money I invested in myself to become a champion in the future – bringing in specialized professionals to help improve my training camp,” Almeida said back in November, prior to earning another bonus for his first-round knockout win over Birchak.

“I’m more of a professional athlete now – a more grown-up athlete with great opportunities that the UFC has given me,” he added at the time. “I’m a more complete athlete, more focused. I’m young and I always have to keep evolving my game so that I can accomplish my objective of becoming UFC champion.”

One month later and with another win under his belt, the talented Chute Boxe Academy product had refined his focus even further, breaking it down to the nuts and bolts of what it will take for him to take the next step forward in his career and perhaps earn himself a place on this year’s look back at the top fighters to grace the Octagon.

“I think it’s about training harder – I have to keep motivating myself and staying true to the people I’m with; having my head in the right place and just continue what I’m doing,” he said when asked what it will take to maintain his momentum and continue his incredible unbeaten run into 2016 and beyond. “I think I have a very strong mind – I don’t let anything from the outside get inside and I always keep my focus; that’s what I have to do to continue being at the top of the weight class.”

And if he does that, Almeida believes everything else will fall into place.

“Step-by-step, I will work my way to the top and accomplish my objective of being the UFC champion.”