Alloway Fighting for More than Himself These Days

"I wanna do well in the sport so when he grows up he’s got something to
be proud of, something to show off to his friends about. That’d be a
nice feeling for me." - Benny Alloway 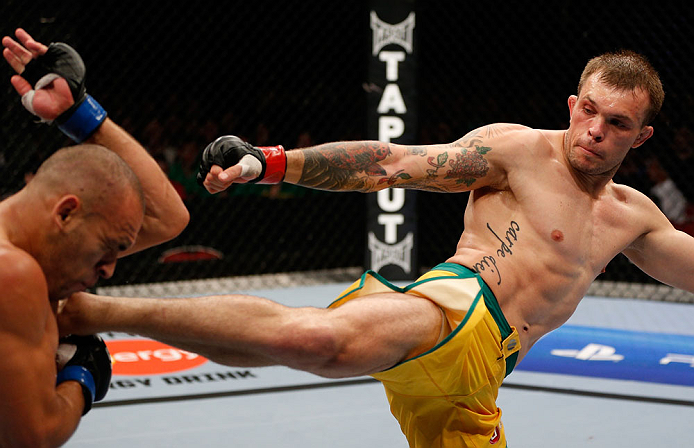 Ben Alloway, who fights Ryan LaFlare April 6 on UFC on FUEL TV 9, has had an unusually quick journey to the Octagon. Not so long ago, he was working in hospitality and playing soccer locally without any serious aspirations of becoming a full-time athlete. The Gold Coast, Australia local simply began jiu-jitsu as a way to get fit after an injury.

“Not really (did I aspire to be an athlete),” he said. “I did play pro soccer (locally), I got injured, and that’s how I got into MMA. I was actually going to try and get back into the Australian circuit, but fell into MMA and two and a bit years later here we are.”

Alloway, a contestant on 2012’s The Ultimate Fighter: The Smashes, credits intensive training for his rapid rise.

“Which Aussie boy doesn’t like to fight? I guess I was just in a position to train full-time doing two sessions a day, so I fast-tracked it a bit that way. Then I had the opportunity to go overseas and train at the H.I.T. squad, and that’s where I decided I wanted to have a crack at making the UFC.”

Alloway has said goodbye to his job as a nightclub manager, and he’s glad to be leaving the life of excess behind.

“The party scene wasn’t too good for my health. I had a lot of fun while I was in it, but MMA sort of brought me out of that industry, which is a good thing in the long run.”

On The Ultimate Fighter, Alloway impressed in his first fight with a second round knockout over Valentino Petrescu. But his next bout was a grueling decision loss to eventual finalist Bradley Scott. Alloway appeared distraught post-fight, and admits he thought his UFC run was over.

But he was given another chance with a fight on the season finale card last December against fellow Australian Manuel Rodriguez. “Benny Blanco” scored a first round KO victory, landing an Anderson Silva-esque front kick to the jaw.

“After I lost to Brad I thought that the ride was over. I didn’t think I’d get that fight on the finale, but getting that chance against Manny, you know they say the sport has ultimate highs and ultimate lows, so I was low for a few weeks on the show when I lost, then when I got the contract to fight in December last year it was another high. So I just had to try and take my chances and secure that contract.”

The 31-year-old Alloway believes he’s ready for LaFlare, a Long Island native with a 7-0 record in MMA.

“I see him as a well-rounded fighter with wrestling probably being his strength. But I don’t see him having anything that I haven’t seen or been up against before.”

LaFlare has not fought much in recent years, so there has been scant footage to study. But Alloway, 13-4 in MMA, is confident in his preparation.

“I’ve got a hold of what I could; he’s only had seven odd fights in four or five years. I got his latest fight from January, but again, he hasn’t fought for two years so there’s not a lot to go on or a lot of recent stuff. But I think we’ve prepared pretty well for him.”

Late last year a new motivation entered Alloway’s life with the birth of his son Chael. And yes, he is named after outspoken UFC contender Chael Sonnen.

“Yeah, he is actually (named after Chael Sonnen), the wife and I were watching Sonnen vs Silva 2, Sonnen got announced and walked out and I said what about Chael? That’s a cool name and she didn’t realize what I was talking about. Then she went with it asked me a couple of weeks later where I got it from.”

Not surprisingly, Alloway counts himself as a fan of the controversial fighter.

“I like who he is, and what he does; I enjoy it. He walks the walk and talks the talk.”

For Alloway, the birth of Chael provides twofold motivation.

“I wanna do well in the sport so when he grows up he’s got something to be proud of, something to show off to his friends about. That’d be a nice feeling for me. Having said that, providing for him is motivation, and having another mouth in the house, if he eats as much as me when he gets older we’re gonna be in trouble.”